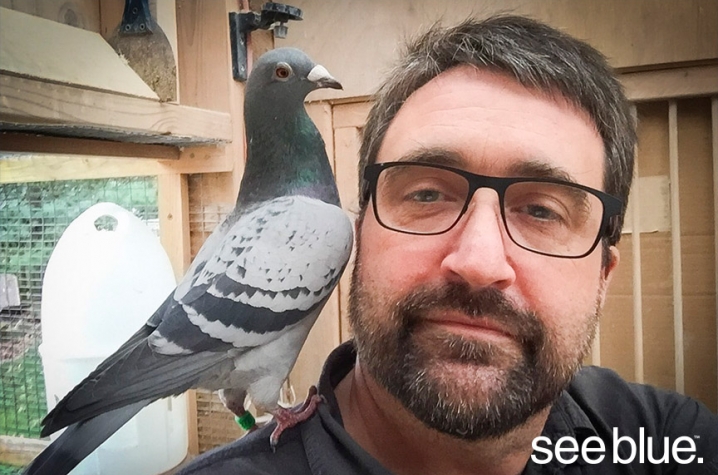 Video by UK Public Relations and Marketing. To view captions for this video, push play and click on the CC icon in the bottom right hand corner of the screen. If using a mobile device, click on the "thought bubble" in the same area.

LEXINGTON, Ky. (July 18, 2016) — Most folks at the University of Kentucky know David Stephenson as a multimedia instructor and the Kentucky Kernel's photojournalism adviser. People across Kentucky and media organizations across the nation know him as an award-winning photojournalist. But his nearly 17,000 social media fans know him as something else entirely - "The Pigeon Photographer."

"Usually whenever I talk about the pigeon photographer or the pigeons in general, people raise an eyebrow and cock their head sideways, and they're like, 'What do you mean, pigeons?'" he said.

Yes, pigeons. But not your average street pigeons. These are homing pigeons - bred for speed and endurance - that have the natural ability to find their way home, no matter where they are.

Stephenson has combined his two passions, photography and pigeon racing, into quite a unique hobby. With a pigeon loft in his backyard housing around 60 birds currently, he raises, trains and races the birds. At the same time, he documents the beauty of their flight with a Canon 5d Mark III and Canon 1DX and shares it with a global community on Facebook and Instagram.

"There are pigeon guys who have learned photography and they can take pictures of birds," he said. "But they're not going to do it like I'm doing it."

Pigeon racing dates back centuries. Here's how the sport works: pigeon fanciers release the special breed of pigeons from a distance – usually hundreds of miles away from their loft – and track which bird arrives home in the shortest amount of time. Today, the birds are tracked with tiny electronic chip rings fitted on their legs.

"The concept just blew my mind – that you could let them out and they would find their way back," Stephenson said. "It was just fascinating to me."

His love for birds began when he was a kid, around the same time his love for photography was building. Stephenson grew up in Lexington with both his parents working at UK and didn't have a lot to take pictures of around the house – so he turned to animals, namely birds, for his subjects. After a neighbor introduced him to homing pigeons, he raised some of his own until he left for college at Western Kentucky University.

His first photo ever published in a magazine, while he was in high school, was of one of his pigeons in Bird Talk magazine.

In addition to his role at the Kernel, Stephenson began teaching integrated strategic communication and journalism courses in the UK College of Communication and Information full-time two years ago. He continues to freelance, specializing in equine and sports photography, for media organizations across the country, including The New York Times, The Wall Street Journal and The Associated Press. And you can often find him shooting on the sidelines with Kernel photographers at a UK football game.

"It just depends on who calls and who needs me," Stephenson said. "I do a lot of magazine work, lately a lot of portrait work…breaking news if something happens in this neck of the woods. So I wear a lot of hats."

Eight years ago, his two passions finally came together again. Since then, Stephenson has been committed to showing pigeons, who have gained a bad reputation on the street, in a new light.

"These pigeons are athletes and they're a different breed of pigeons than we see on the streets," he said.

Stephenson compares them to thoroughbreds in horse racing – "they're a little bigger, more muscular, have more stamina, and are very tough, very smart birds."

With extraordinary photos of the birds up close displaying wing patterns, bright eyes and iridescent coloring on their necks, and slow motion videos showing the power of flight, viewers have surely seen pigeons in the light Stephenson was hoping for.

Comments like, "Wow! What a shot! Takes my breath away!" are common on his social media posts. One follower even said she planned to share his work with her New York City friends, "who may pass by thousands of pigeons each day and not even realize their beauty."

After realizing he could capture features of the birds unlike anyone else - using a fast shutter speed or professional lighting - he started selling some photos and creating calendars. It was a way to protect his work with his identity and eventually began paying for bags of feed and taking care of racing fees. But the attention, especially on social media, has been more than a way to make money.

"It's been a really interesting education for me because I've learned a lot about how social media works and how to get the followers, where they're coming from...and I can then use that in class to help talk about multimedia use, visuals and social media."

Based on his own experience, Stephenson often explains to students that social media posts with visuals, especially video, reach far more people than those with only text. And he teaches students how to use their mobile devices to produce multimedia pieces, just as he does for his slow motion and time-lapse videos.

"So I do turn it around and use it in class a little bit, and it's a fun discussion to talk about the birds," he said.

His next venture, which will lend itself to some firsthand experience in business management and marketing, is starting up a company selling supplements for birds.