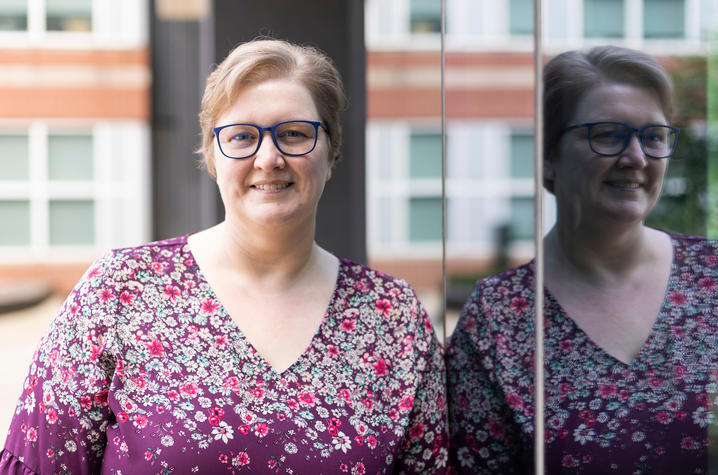 Since its inception in 2005, Alzheimer’s & Dementia has sought to bridge the knowledge gaps that separate traditional fields of dementia research by rapidly disseminating new findings and acting as a forum for articles covering clinical investigations and basic, social and behavioral research. Based on the number of citations, the journal is ranked fourth out of 212 in clinical neurology journals, and first in specialized topic journals.

“We strongly believe that Donna Wilcock will not only honor the status and legacy of this flagship journal but will continue its advances with her own unique vision and expertise,” said Harry Johns, Alzheimer’s Association CEO. “At the same time, we thank Zaven Khachaturian for his deep dedication and leadership as the founding editor-in-chief of Alzheimer’s & Dementia, making A&D the highly respected neurology journal it is today.”

Wilcock is the Robert P. and Mildred A. Moores Endowed Chair in Alzheimer’s Disease at the Sanders-Brown Center on Aging and professor in the Department of Physiology at the University of Kentucky. She is assistant dean of biomedicine in the College of Medicine, and serves as the Biomarker Core director for the University of Kentucky Alzheimer’s Disease Research Center.

Wilcock’s research is focused on vascular cognitive impairment and dementia (VCID), a common cause of dementia and frequent co-morbidity with Alzheimer’s disease pathology. She is performing translational research on VCID, ranging from studying molecular mechanisms through identification of novel biomarkers in patients.

As editor-in-chief, Wilcock will, among other things:

“I am grateful for the recognition and responsibility of this new position, and I plan to build on the stellar work done by the Khachaturians to establish Alzheimer’s & Dementia as the premier journal for our field. My new editorial board will reflect the desire for a more geographically, ethnically and racially diverse dementia field. New sections in the journal will be dedicated to key areas of investigation including biomarkers, neuropathology, basic and translational science, and clinical trials,” said Wilcock.

“As one of the leading journals in this space, addressing a disease with such broad and devastating impact, we have an obligation to ensure that we publish only the best quality, thorough and accurate scientific research. I will work with our board and reviewers to make sure all work published in Alzheimer’s & Dementia is seen as first-rate research that is rigorous and reproducible. A major goal is to further increase the visibility and impact of Alzheimer’s & Dementia,” Wilcock said.

“Mentoring is a passion of mine. Opportunities to develop conversations with first and senior authors of published research articles through social media and webinars will enable the journal to facilitate networking and mentoring,” Wilcock added.

According to the search committee, Wilcock was selected based on her strong scientific background, experience in publishing, scientific integrity and commitment to diverse, equitable and inclusive representation in editorial boards.

Wilcock received her bachelor’s degree in pharmacology from Cardiff University. She obtained her doctorate at the University of South Florida, and completed postdoctoral training at Albert Einstein College of Medicine and Duke University. Her work is funded by the National Institute on Aging and the National Institute on Neurological Disorders and Stroke. Her research is focused on inflammatory and angiogenic processes, as well as studying the influence VCID has on the progression and severity of Alzheimer's disease.

Khachaturian has been a visionary leader in the Alzheimer’s and dementia research field for more than four decades. He led Alzheimer’s & Dementia to its current high standing due in large part to his editorial leadership and commitment to excellence.

Khachaturian is generally acknowledged as the chief architect of the extramural research programs on Alzheimer’s disease and the neurobiology of aging at the National Institute on Aging of the National Institutes of Health. Formerly he served there in the dual role of director, Office of Alzheimer's Disease, as well as the associate director, Neuroscience and Neuropsychology of Aging Program. In these positions he was responsible for planning, developing and administering major national programs of research on Alzheimer's disease and brain aging.

About the Alzheimer’s Association

The Alzheimer’s Association is the leading voluntary health organization in Alzheimer's care, support and research. Our mission is to lead the way to end Alzheimer's and all other dementia — by accelerating global research, driving risk reduction and early detection, and maximizing quality care and support. Visit www.alz.org or call 800-272-3900.