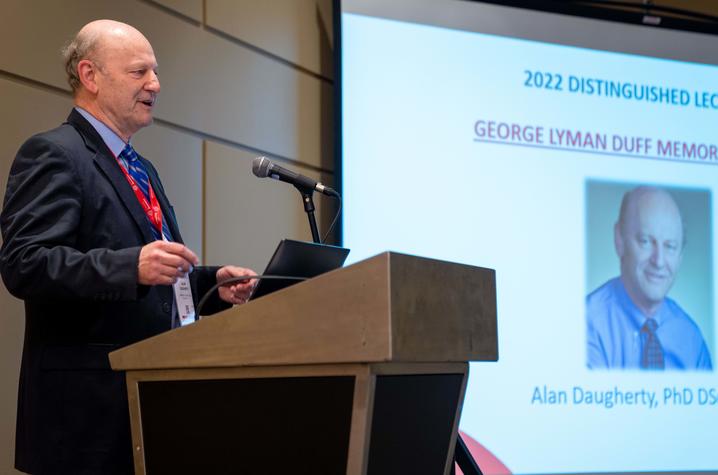 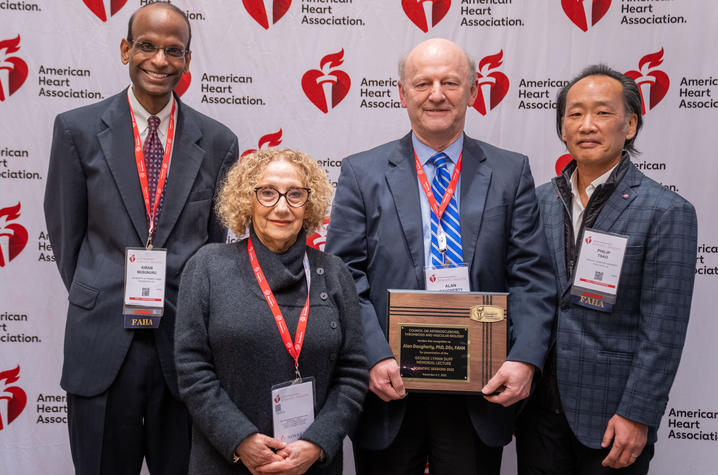 LEXINGTON, Ky. (Nov. 17, 2022) — A University of Kentucky researcher has received a prestigious honor recognizing his decades of work in cardiovascular health.

Daugherty is the Gill Foundation Chair of Preventive Cardiology, director of the Saha Cardiovascular Research Center and the Saha Aortic Center, chair of the Department of Physiology and associate vice president for research core facilities.

Daugherty’s research is primarily focused on molecular mechanisms of human vascular diseases. Since he arrived at UK in 1997, his lab, in collaboration with Lisa Cassis, Ph.D., vice president for research and professor of pharmacology and nutritional sciences, has focused on the role of the renin angiotensin system in atherosclerosis and aortic aneurysms.

Angiotensinogen, a protein predominantly formed by the liver, is the unique precursor of the renin angiotensin system, which plays a critical role in regulating blood pressure.

The Duff Lecture was established in 1956 by the Society for the Study of Arteriosclerosis in memory of Duff, one of Canada’s most distinguished pathologists and medical educators. The lecture is sponsored by the Council on Arteriosclerosis, Thrombosis and Vascular Biology (ATVB), on which Daugherty served as chair of the council for two years and editor-in-chief of the ATVB Journal for 10 years.

“This is the oldest award lecture for the council that I am associated with at the AHA. It has been delivered by very prominent scientists, including Nobel Prize winners. So, to be selected to give the lecture by a committee of my peers was very special,” said Daugherty.

His lecture, “Angiotensinogen as a Therapeutic Target for Vascular Diseases,” he explained, “was a brief summary of the road that Lisa Cassis and I started on many years ago when we genetically manipulated angiotensinogen in mice and demonstrated interesting phenotypes, some expected and some not.”

Subsequent studies have led to clinical trials and two companies developing drugs, now in late-stage development, to deplete the protein.

“We have now realized that this drug therapy could be effective for a range of vascular diseases including atherosclerosis and aortic aneurysms,” Daugherty said.

According to the National Heart, Lung, and Blood Institute, heart disease linked to atherosclerosis is the leading cause of death in the U.S.

Aortic aneurysms can cause life-threatening bleeding or sudden death, and there are currently no medications to directly treat the condition or prevent an aneurysm from growing.

The AHA’s mission is to improve the lives of all Americans through innovative research that impacts treatment guidelines, education and policies. Daugherty has been affiliated with and served in many roles with the AHA since 1993, from a peer review committee member with the Missouri affiliate to chair of the Oversight Advisory Committee for Strategically Focused Research Awards with the organization’s national center.

“The AHA has had a major impact on my professional life. They provided me with research support at the very early stages of my career, were critical to my academic survival at specific stages, and more recently have provided substantial funding for Cassis and myself to collaborate with colleagues at Baylor College of Medicine,” said Daugherty.

In 2018, the AHA awarded UK and Baylor’s research partnership $3.7 million to study aortic disease. The funding underwrote the work of the UK-BCM Aortopathy Research Center’s study on the impact of sex differences related to aortic diseases.

“The AHA has also funded many graduate students and fellows in my laboratory,” Daugherty said. “It’s also been the organization that has deeply involved me in numerous volunteer efforts. All these forums have been very helpful for my professional development and networking.”

Daugherty’s active grant funding includes awards as principal investigator and co-investigator totaling $12.5 million. He has more than 400 publications with more than 27,000 citations.