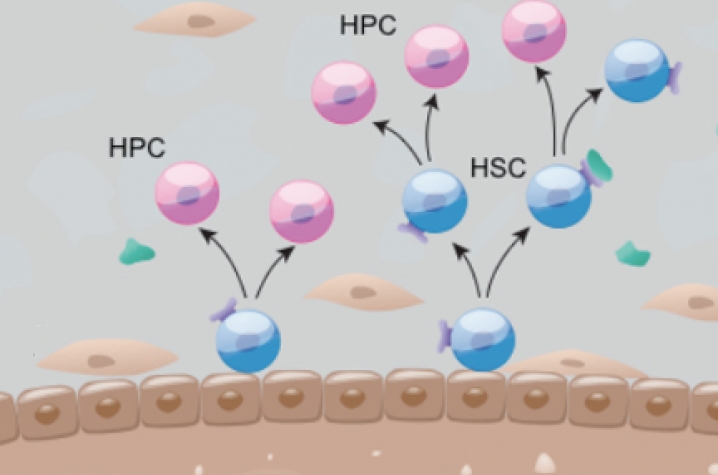 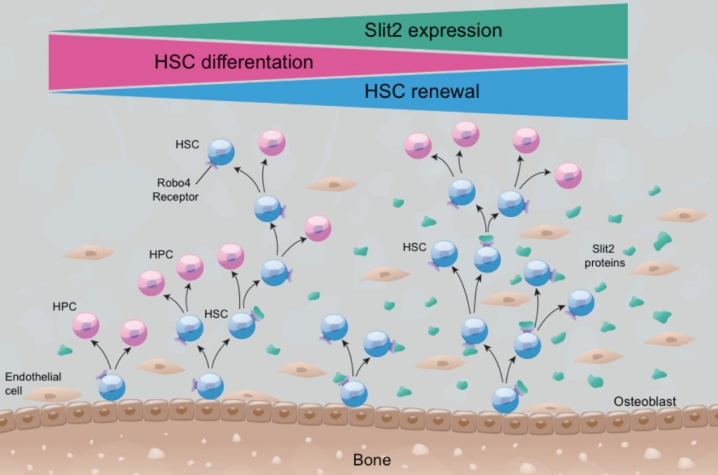 LEXINGTON, Ky. (Nov. 4, 2009) —  Researchers at the University of Kentucky's Markey Cancer Center are investigating the ability of a protein called SLIT2 to maintain healthy levels of a type of stem cell, called hematopoietic stem cells. These cells, found in bone marrow, give rise to every type of blood cell in the body.

[IMAGE2]The research, led by Dr. Gary Van Zant, professor of internal medicine in the UK College of Medicine, has broad implications in a number of areas in medicine. However, its most immediate application could be in helping cancer patients undergoing chemotherapy.

Chemotherapy can reduce the population of hematopoietic stem cells, which are normally self-regenerating. This can result in a shortage of specialized blood cells, such as platelets, which play a key role in blood clotting. Currently, chemotherapy-induced platelet deficiency (or thrombocytopenia) is treated with platelet transfusions, which are very expensive.

"Platelet suppression is the limiting factor in determining tolerance for chemotherapy," Van Zant said. "Our hope is that, by understanding the mechanism by which SLIT2 maintains the population of hematopoietic stem cells, we can develop a therapy that can be administered to patients undergoing chemotherapy, to keep their platelets at a healthy level."

SLIT2 – first discovered in fruit flies and subsequently found throughout the animal kingdom, including humans – is secreted by cells and binds to a receptor (called Robo) on the same cell or adjacent cells. The SLIT2-Robo signaling pathway plays a key role in determining  the positioning of cells.  For example, it is extremely important in embryogenesis, determining the migratory paths of cells in developing embryos. In mammals, SLIT2 also plays an important role in determining how far nerves extend into tissues, by repelling axon growth.

Van Zant's team's research is aimed at developing a ligand for the Robo receptor – a synthetic mimic of SLIT2 that incorporates the transducing regions of the molecule.  These synthetic compounds can then be added to cultures in the laboratory to determine their safety and effectiveness at growing hematopoietic stem-cell populations.

Concurrently, Van Zant's laboratory is developing a transgenic mouse with elevated SLIT2 levels. Researchers will quantify any increase in the mouse's hematopoetic stem cell population and observe its natural history to determine if there are any physiological side effects. The SLIT2 mouse will also provide a model for study to help researchers better understand the cellular mechanism, Van Zant said.

Another possible application of this research could be in treating hematologic malignancies, such as leukemia and lymphoma.  Administering SLIT2 therapy in patients undergoing bone marrow transplants could help the transplanted marrow do its job better, Van Zant said.

The University of Kentucky has submitted patent applications on both of these uses. A third potential application of this research could be to grow umbilical cord blood stem cells in the laboratory.

"The problem with cord-blood stem cells is that the quantities are tiny, insufficient for transplantation in adults," Van Zant said. "Our hope is that we can develop a technology using SLIT2 to propagate these cells in culture."

Finally, SLIT2 may one day prove useful in preventing cancer from spreading througout the body. It has been independently noted that SLIT2 is downregulated in many cancers, and there is anecdotal evidence suggesting that a depressed level of SLIT2 plays a role in metastasis. That's not too surprising, says Van Zant, considering SLIT2's role in the positioning of cells.

The research will be supported by a two-year NIH Challenge Grant in the amount of $850,000. Competition for these grants, funded by the National Recovery Act, was very steep, with only 1-2 percent of applicants receiving funding.