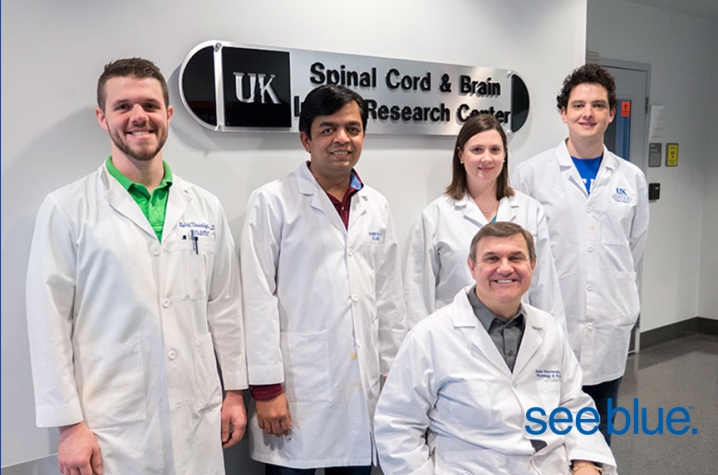 LEXINGTON, Ky. (Feb. 15, 2016) — At the age of 19, Sasha Rabchevsky was a strong safety on the Hampden-Sydney College football team when a motorcycle accident left him paralyzed from the chest down.

Rabchevsky has transformed that dreadful turn of events into a meaningful career searching for ways to repair spinal cord damage and improve the lives of those living with spinal cord injury (SCI).

"After my accident, I knew I wanted to pursue research to understand what my condition was and if not cure it, figure out and understand why there was no cure," he said.

After graduating with a bachelor of science in biology only a semester behind his original class, and then working as a technician at the Uniformed Services University of the Health Sciences in Bethesda, Maryland, Rabchevsky joined the University of Florida Neuroscience graduate program and earned his PhD in 1995. After a postdoctoral fellowship at the University of Paris, XII, he came to Lexington in 1997 for a second postdoctoral fellowship and launched his career as an independent investigator in 2002.

Rabchevsky's research career has focused on two primary problems related to SCI: finding ways to either promote tissue sparing post-injury to improve functional recovery,  or to prevent aberrant neuronal regeneration that can lead to dangerous hypertension.

"A key element underlying both problems is the dysfunction of mitochondria, which are the principle energy-producing organelles in a cell responsible for their life, but also responsible for cell death when damaged," Rabchevsky explained. "We've been testing some unique pharmacological agents which are showing promise as mitochondria stabilizers of sorts, preventing their short circuiting and thus promoting neuroprotection after SCI."

Part two involves a little-known syndrome following SCI that stems from a sort of rogue regeneration that is associated with a condition called autonomic dysreflexia.

"There is actually regeneration that does occur after SCI, and a lot of it," said Rabchevsky. "However, most axons do not form proper connections and instead many can activate autonomic (unconscious) reflexes that aren't necessarily pleasant or good even for the human condition."

During autonomic dysreflexia, a painful stimulus below the level of the SCI (which the person cannot feel) can cause sudden and often sustained hypertension until the stimulus is removed.

"So the person with SCI can have a huge spike in blood pressure, often accompanied by headaches and sweating, but not really know why it's occurring, and there's no shut-off mechanism, so to speak," Rabchevsky explained. "Clearly, that kind of change in blood pressure wreaks havoc on the body and daily livelihood because the most common trigger is a full bladder or bowels, which is frequent but imperceptible."

Rabchevsky has recently received a grant that will allow his lab to be the first to transplant healthy mitochondria into animals with SCI.

"We hope this procedure will replace dysfunctional mitochondria in the injured host cells to foster tissue sparing and, thus, promote functional recovery and reduce the incidence of autonomic dysreflexia," he said.  "Down the road, we might even be able to merge the two branches of my research into one, combining mitochondrial transplantation with pharmacologic agents that mitigate cell damage to improve both grafted and host mitochondria survival for maximizing functional neuroprotection."

Watch the video above to learn more about what drives Rabchevsky as a researcher and why he thinks UK has a uniquely nurturing environment for research.

This video feature is part of a new monthly series called ‘“see discovery:” The People Behind Our Research.’  The videos, produced by UKNow and REVEAL, highlight the important work being conducted at the University of Kentucky by telling the stories of our researchers.  The idea is to discover and share what motivates our faculty, staff and students to ask the questions that lead to discovery.