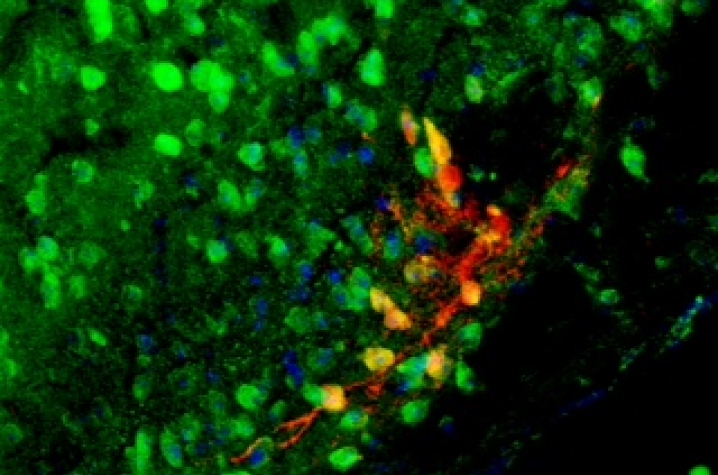 LEXINGTON, Ky. (Sept. 19, 2013) — The bodies of mammals, including humans, respond to injury by releasing endogenous opioids — compounds that mitigate acute pain. A team of researchers, led by those at the University of Kentucky, has uncovered groundbreaking new information about how the body responds to traumatic injury with the development of a surprisingly long-lasting opioid mechanism of natural chronic pain control.

Remarkably, the body develops both physical and physiological dependence on this opioid system, just as it does on opiate narcotic drugs. The research is featured on the cover of the current issue of the prestigious journal Science.

The scientists examined opioid function at sites of pain modulation in the spinal cord. When the opioids act at opioid receptor proteins, they "put the brakes" on the transmission of pain signals to the brain. For example, opioids are released when a patient undergoes surgery, a soldier is wounded in battle, or an athlete runs a marathon. Researchers have known for a while that blocking opioid receptors can increase the intensity of acute pain - the pain occurring immediately after injury. But up to this point, scientists had been unsure whether blocking opioids could increase chronic, long-term pain.

They began their work with the idea that the opioid system is much more important than previously recognized, with an ability to indefinitely oppose chronic pain. If true, they reasoned, then blocking opioids should increase chronic pain.

To simulate human injury, the researchers produced inflammation, or skin incision, in a mouse model, then waited several weeks for signs of pain-like behaviors to subside. They then administered opioid receptor blockers, effectively halting the pain-relieving actions of the opioid system.

When the opioid system (for which the authors use the term MORCA, for mu opioid receptor constitutive activity) was blocked, the mice reverted to a set of behaviors associated with the experience of pain. Surprisingly, they also experienced symptoms similar to the known effects of opioid withdrawal in the drug addict: tremor, jumping and shakiness. These results were observed even up to six and a half months after pain had seemingly resolved. The long-lasting nature of the phenomenon suggests that endogenous opioid analgesia silently continues long after an injury has healed.

In other words, long after an acute injury has healed, MORCA continues to “put the brakes" on pain. When MORCAis blocked, the "accelerator" is allowed to run free, and chronic pain reappears.

Because the body appears to develop a reliance on MORCA that parallels the addiction of a synthetic opioid user, and because it is known that stress is a key factor in causing relapse in opioid addicts, it follows that stress may also be a key factor in relapse in chronic pain patients. Thus, the authors speculate that stress could interfere with endogenous MORCA analgesia, leading to the emergence of widespread, rampant chronic pain such as is observed in a range of conditions, including fibromyalgia.

This research provides some answers to how the body responds to pain, but also raises questions. To return to the "brake and accelerator" metaphor, future studies are needed to better understand the long-term consequences of simultaneously pressing the accelerator and the brake on pain. In other words, how can we either prevent the "brake pads" from wearing out, or replace them when they do?

For more on the molecular and cellular science behind this research, refer to the complete article published in the current edition of Science.