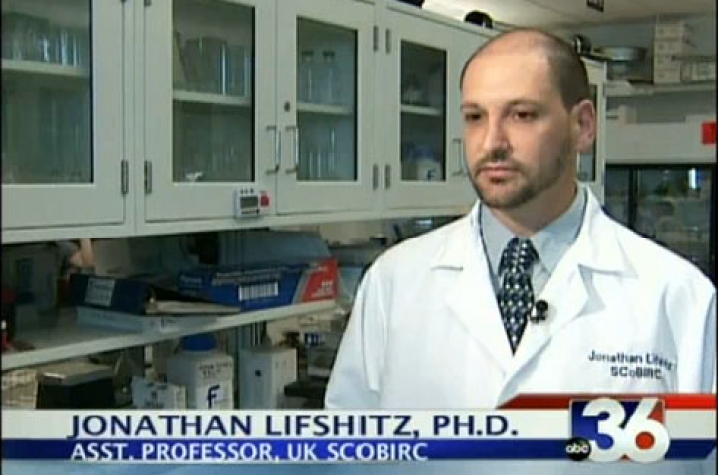 LEXINGTON, Ky. (Aug. 20, 2009) – Brain injury researchers at the University of Kentucky have spent hundreds of hours watching YouTube videos of people getting smacked, punched and knocked in the head during sporting events and recreational activities. But those researchers weren't goofing off on the Internet; they were doing hard science.

Led by Jonathan Lifshitz, assistant professor in the UK Spinal Cord & Brain Injury Research Center, the team was collecting data to document a visible, involuntary response to head trauma. Their findings could have immediate value in helping coaches make educated, objective decisions about whether to return an athlete to play after a blow to the head.

"As basic scientists, we all hope that our research we do in the laboratory translates into the clinics," Lifshitz said in a television interview with WTVQ-36 in Lexington. "In this case, we hope it translates onto the sidelines."

Lifshitz describes the response, dubbed the "fencing response," as a forearm posture that resembles the en garde position in competitive sword fighting.  It also can appear as a defensive boxing pose. The fencing response – which has also been observed in rats under experimental conditions – indicates damage to blood vessels and neurons in a critical brainstem region that controls balance, Lifshitz said.

In the course of their research, the team reviewed some 2,000 "knockout" videos on YouTube, eventually narrowing their sample to three dozen that showed moderate-to-severe impacts to the head, where the person receiving the blow did not immediately get up. Of those, two-thirds exhibited a clear fencing response. The response was noted particularly in football and mixed martial arts, Lifshitz said.

"The fencing response frequently takes place before the player even hits the ground," Lifshitz said.

Among the videos the team reviewed was the head-to-head collision of Baltimore Raven Willis McGahee and Pittsburgh Steeler Ryan Clark in a Jan. 18 AFC playoff game. McGahee's immediate fencing response is clearly visible in the video.

Moderate-to-severe head trauma can cause permanent brain damage or death if ignored by medical staff. Unfortunately, sometimes these injuries are not readily apparent. The fencing response provides an immediate visual cue that could help injured players get the attention they need, Lifshitz said.

"The observation of the fencing response can help coaches and trainers make immediate and future return-to-play decisions," Lifshitz said. "But the response is not universal.  The absence of a fencing response should not be taken as a sign that no injury has occurred."

The findings were published Aug. 18 in the scholarly journal Medicine and Science in Sports and Exercise.