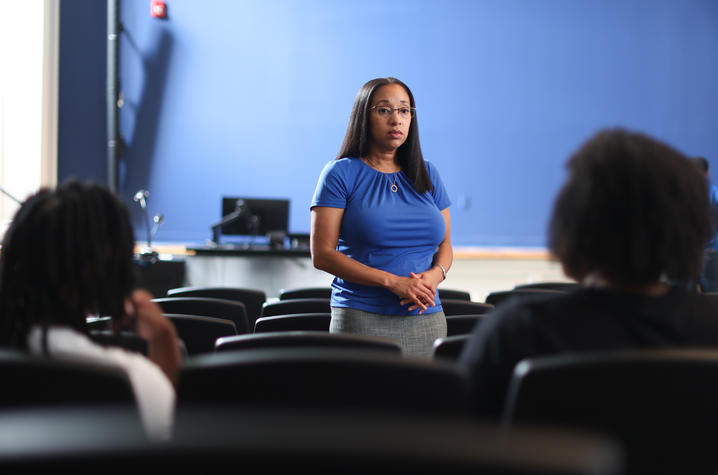 LEXINGTON, Ky. (Aug. 11, 2022) — Black adults share about their experiences in drug treatment in a new University of Kentucky study published in the Journal of Substance Abuse Treatment.

Until now, few studies have included the voices of Black people and their experiences with treatment providers. Study authors hope it will inform changes to promote successful recovery and healing.

The study was conducted in Kentucky, where opioid-related deaths recently more than doubled among Black populations. Thirty-nine Black men and women, who had used opioids within the past six months, spoke to the research team about their experiences.

Exploring factors likely to impact the experiences of Black adults in treatment is an important step to being able to culturally adapt treatment strategies and integrate approaches that will have more meaningful effects among this underserved population, said Danelle Stevens-Watkins, Ph.D., professor of counseling psychology in the UK College of Education Department of Educational, School and Counseling Psychology and UK’s associate vice president for research in diversity and inclusion.

The paper is the first to be published from an ongoing $3.2 million National Institute on Drug Abuse project led by Stevens-Watkins, currently in its second year. The project will include interviews with 800 Black American adults that misuse prescription and illicit opioids, filling a dire need for data on this underserved group.

In previous research conducted among primarily white participants, spending time in substance use treatment tended to increase readiness to change, regardless of whether it was mandated by the legal system. This did not hold true, however, among participants in the current study.

“The men and women in our study reported less success in their experiences with treatment when it was mandated, versus something they sought out because they wanted it for themselves,” said Candice Hargons, Ph.D., associate professor of counseling psychology and interim chair, UK College of Education Department of Educational, School and Counseling Psychology.

The study authors suggest assessing Black individuals for readiness and motivation is important in treatment, especially when treatment is mandated. They said helping Black adults reduce feelings of loss of control in treatment could increase desire to engage in the process. This could be accomplished, for instance, through developing a collaborative experience, where clients have a role in defining their needs.

While study participants understood that personal investment in the treatment process was necessary for recovery, some may have overestimated that wanting it for yourself was the predominant driver in the recovery journey, the study authors wrote.

“Many of the people who talked to us for this study felt someone can simply ‘will’ themselves into recovery. Having a personal investment in the process is important, but you also must consider the biological aspects of recovery and the ways treatment helps to address those. It really takes both a readiness for change and a supportive therapeutic environment along the way,” said Brittany Miller-Roenigk, Ph.D., Lyman T. Johnson Postdoctoral Fellow.

The study’s look into the lived experiences of Black men and women who use opioids also highlighted how provider characteristics can largely influence the treatment process. Many expressed a difficulty in trusting others, complicated by a lack of racial similarity with providers.

“There is a great need to recruit more Black therapists. Many of the participants in this study had never or rarely encountered a provider of color. Several talked about needing to feel the therapist will understand them when talking about experiences of racism, discrimination and microaggressions,” said Natalie Malone, Ph.D. student in counseling psychology.

A few said that race did not matter, if the provider had the ability to build rapport, avoid a judgmental tone and maintain confidentiality.

Study participants also discussed differences in quality between mandated programs, compared to drug treatment programs that individuals can access on their own by paying privately or through insurance. Some thought therapists in treatment facilities more likely to have Black patients had less education and training than those that served predominantly white patients. Participants also suggested that providers in mandated programs may have been facing burnout and lacked investment in the treatment process, too.

Partners and family members were primary sources of support networks among the individuals in the study. Partners undergoing treatment simultaneously were most likely to provide support. Nobody in the study said their partners were a barrier to treatment.

For those with family members aware of their drug use, several identified their family as a primary source of support. Some family members were unsupportive of treatment due to their own personal substance use.

The researchers found a third theme they refer to as “absent support,” which had a negative impact but not a negative intent. This happened among participants’ families that spend time together socially but have a culture of not becoming involved in the personal affairs of others. Absent support was most often related to maintaining privacy, which is consistent in the literature among Black Americans, the authors said.

When possible, the study authors suggest integrating peers, family members or partners into treatment may be a useful resource for reducing opioid use among Black individuals.

The study authors are sharing these initial findings to highlight aspects of treatment that could be addressed to most likely influence success.

“It is important to take a deeper look into the lived experience of Black men and women who use opioids so that researchers, clinicians and those who influence programs that support recovery and healing have a better understanding of the factors that can make a true difference in their success,” said Destin Mizelle, Ph.D. student in counseling psychology.

This is a critical time for Black individuals who use opioids, said Jovonna Atkinson, MSW student in the College of Social Work and REFOCUS research study coordinator.

“Overdose-related deaths are on the rise and Black men and women are more likely to face similar and sometimes harsher consequences than their white counterparts, including higher likelihood for criminal convictions, longer incarcerations, higher unemployment rates and increased mental health risks,” Stevens-Watkins said. “The more data we can gather to inform culturally-tailored interventions, the greater chance we have to reduce the adverse social, legal and fatal consequences associated with opioid use among Black populations.”