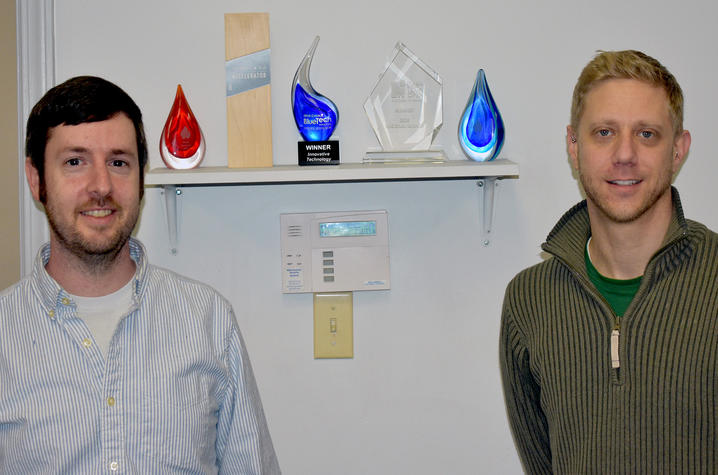 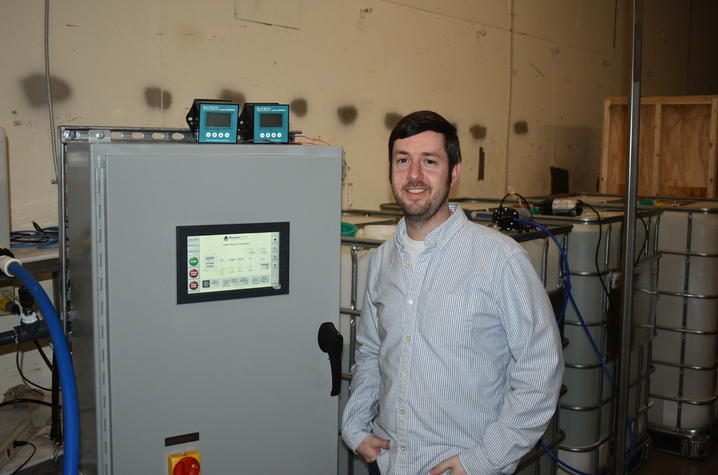 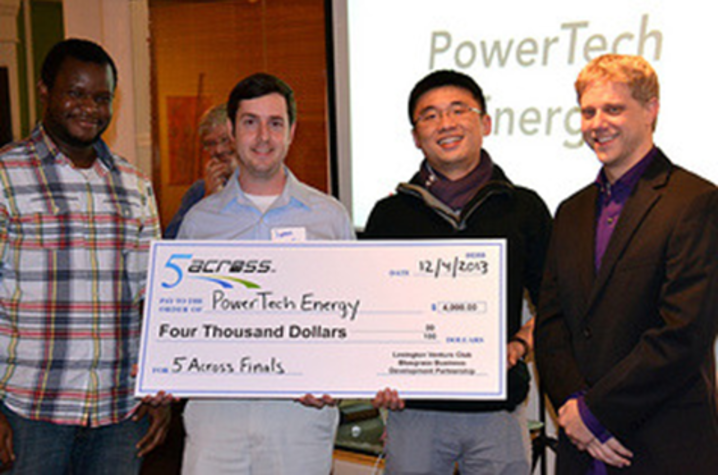 LEXINGTON, Ky. (April 14, 2020) — When Cameron Lippert approached University of Kentucky Center for Applied Energy Research (CAER) colleague James Landon about taking part in one of Lexington’s business plan pitch competitions on one technology he was assigned to develop for the university, Landon was skeptical. He wasn’t sure their project was mature enough at that point.

Ever insistent, Lippert pressed on. And soon enough, he was able to convince the CAER team of Xin Gao, Ayokunle Omosebi and Landon to enter Awesome Inc’s 5 Across pitch competition in 2013.

That decision helped launch this team on the path to becoming one of Lexington’s most promising high-tech success stories.

Lippert, Landon and CAER's Kunlei Liu are co-founders of Lexington-based PowerTech Water, a start-up company that has developed advanced carbon electrode technologies to deliver clean water for nonenergy production field use in a sustainable manner at a lower cost and to solve some of the challenges related to the water-energy-food nexus.

Before entering and winning that pitch competition in 2013, the PowerTech story got its start in the laboratories, hallways and meeting rooms of CAER. As Landon notes, the center played an important and necessary role in supporting the business concept from the very beginning. That support started with Liu, associate director for research at CAER and the leader of the center’s Power Generation Group, for whom the team worked.

“The center’s allowed us to pursue applied fundamental research from the very beginning,” Landon said. “We would not be where we are today without Kunlei’s encouragement. His support was critical.”

“PowerTech is a great example of why research is so vital to a community,” Liu said. “When you combine a group of hard-working, smart and innovative researchers, sometimes early research springs forward. That’s precisely what happened with the PowerTech team.”

Soon after the Awesome Inc’s 5 Across pitch, the team entered yet another pitch contest — this one hosted by the Bluegrass Angels. One of the most active angel investing groups in Kentucky, this volunteer-led organization seeks to fund and mentor innovative, Kentucky-based start-ups. The group consists of a pool of high net worth individuals who are seeking investment opportunities in Kentucky.

The PowerTech team was one of the winners of that pitch competition too, receiving a $25,000 investment in the process. That win also had another lasting impact: Lippert and Landon were bitten by the entrepreneurial bug.

At that point, the company received some space in ASTeCC, UK’s on-campus, high-tech incubator. They started to work on a laboratory deionized water unit during after-work hours or during weekends or vacation, eventually selling their first unit to a local Kentucky distillery .

In May 2014, PowerTech received $30,000 from the Kentucky Enterprise Fund to support their venture as well as $75,000 from the Bluegrass Angels in follow-on funding.

Despite those rounds of early support and encouragement from the Lexington entrepreneurial community, the concept was still very much in its early stages. Lippert and Landon were still working full-time for CAER, helping to manage research groups as part of the center’s Power Generation Group. Though PowerTech was their passion project, that passion was initially relegated to nights and weekends.

In April 2015, PowerTech learned that their Small Business Innovation Research (SBIR) program grant application had been accepted by the National Science Foundation (NSF). According to Lippert, that $150,000 was a game-changer for PowerTech.

“That was huge,” Lippert said. “We are fortunate in Kentucky that the state matches federal SBIR grants dollar-for-dollar. I can’t emphasize how important that is for a start-up. It really allowed us to take a chance and see what we had.”

At that point, Landon changed his schedule, working approximately half-time for the center and half-time for PowerTech. As Landon noted, the center was once again supportive of this change.

PowerTech licensed two patents from CAER invented by Gao, Omosebi, Landon and Liu — two patents that allowed the company to create some space in a crowded marketplace.

“In the water softening and purification world, the commercial and residential systems you see are salt-based,” said Landon, who is chief technology officer for PowerTech Water. “Those systems use resin beads to remove calcium from the water and salt to regenerate the beads. The problem with these systems is the salt discharge that has to be dealt with at a later time and the bags of salt that need to be constantly hauled to the equipment.”

The PowerTech system utilizes electrochemistry to selectively remove calcium. In this process, the system does not foul (leave a residue that you have to manage).

“That technology is showing great promise and a lot of interest across the water softening and purification ecosystem,” said Lippert, who serves as chief executive officer for PowerTech Water.

PowerTech recently graduated from ASTeCC and has moved to its own facility in Lexington, providing its space to actually manufacture systems. Home to nine full-time employees, PowerTech continues to grow and expand operations in Lexington’s growing high-tech economy.

“When you look at PowerTech’s path from the bench to pitch competitions to our campus incubator and investment, it is a classic high-tech start-up story that evidences the importance of university, community and state resources to support an effort like this,” said Ian McClure, executive director of UK’s Office of Technology Commercialization. “But when we tell these stories, it sometimes seems that the pathway is direct and smooth. The reality is that the PowerTech team worked tirelessly to get to where they are today, made smart decisions and developed strong, collaborative community partnerships.”

As Landon notes, they would not be here without many champions along the way.

“From Kunlei and the CAER team, to support from the center’s Carbon Management Research Consortium, U.S.-China Clean Energy Research Center (a U.S. Department of Energy funded project), UK’s EPSCoR program (Established Program to Stimulate Competitive Research, funded by NSF), and UK’s Office of Technology Commercialization — all of these groups have given us financial support, guidance and counsel over the years in addition to local advisors and investors such as Chris Young and David Goodnight from the Bluegrass Angels and others,” Landon said.

“This is a University of Kentucky success story,” said Rodney Andrews, director of CAER. “This is a CAER success story. We take great pride in seeing PowerTech Water continue to show great promise, and we can’t wait to see what they do next.”