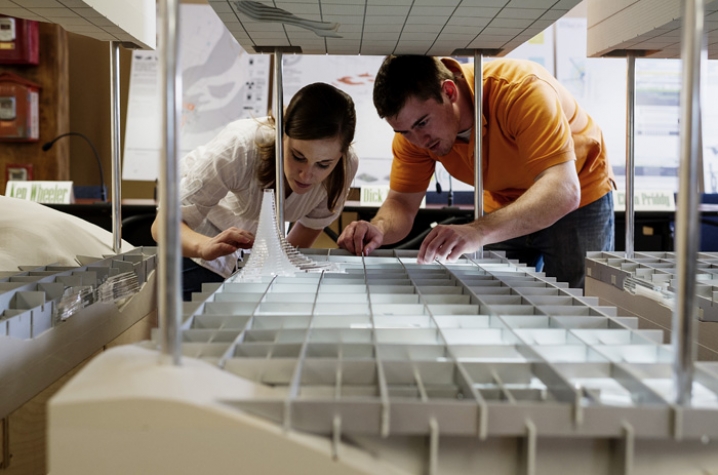 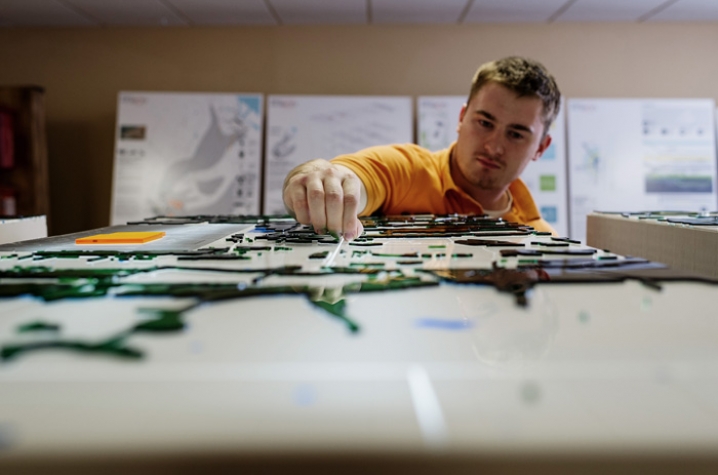 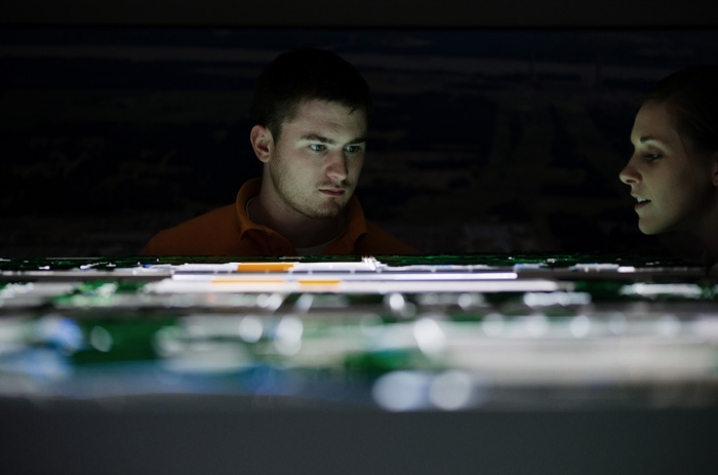 LEXINGTON, Ky. (April 20, 2012)  — In partnership with the U.S. Department of Energy, the Kentucky Research Consortium on Energy and Environment (KRCEE) and the University of Kentucky Center for Applied Energy Research (CAER), students and faculty in the UK College of Design were charged with creating a 150-year plan for the closure, clean up and future use of Kentucky's Paducah Gaseous Diffusion Plant, located near Paducah, Ky., one of the most contaminated sites in the United States. As the point of origin for much of the fissile material bound for both energy and defense during the last 60 years, the site now finds itself with a four-mile long heterogeneous plume of contaminants running beneath it.

As a major example of service learning, students participating in "The Paducah Project," led by Gary Rohrbacher and Ann Filson, developed scale models of the site’s geographical features, its subsurface conditions, and the groundwater contaminant plumes. The models will be used as a tool to provoke conversation and debate among scientists and the public, with the hope of stimulating progress toward removing and abating the groundwater contamination and its sources, enabling a regeneration of the site and region.

The model was presented at the U.S. Department of Energy’s National Chairs Meeting, held April 17-19, which brought together approximately 40 leaders associated with Paducah's Citizens Advisory Board and seven other Site-Specific Advisory Boards from around the nation. The national meeting is held every two years. Other nuclear sites represented at the meeting were: Hanford, Wash.; the Idaho National Laboratory; Savannah River, S.C.; Oak Ridge, Tenn.; Nevada; Northern New Mexico; and Portsmouth, Ohio.

At the request of the assistant secretary of the nation's Office of Environmental Management (EM) or the field managers, Site-Specific Advisory Boards may provide advice and recommendations concerning the following EM site-specific issues: clean-up standards and environmental restoration; waste management and disposition; stabilization and disposition of non-stockpile nuclear materials; excess facilities; future land use and long term stewardship; risk assessment and management; and clean-up science and technology activities.

The College of Design project builds upon previous work and research done at PGDP by a collaboration of partners at UK, including KRCEE, the Kentucky Water Resources Research Institute (KWRRI), CAER, the College of Engineering, and the College of Communications and Information Studies.  The combined accomplishments between these groups are serving as long-term (e.g. 100+ years) sustainable possibilities and opportunities for the PDGP and Paducah.

In 2009, KRCEE was asked to develop a community-based future vision for the PGPD that would identify the range of community perspectives and preferences for the site’s future after the facility closes. This project is well documented and can be viewed at www.paducahvision.com.

Plans developed for the Paducah Gaseous Diffusion Plant will also be presented at the fifth International Architecture Biennale Rotterdam, being presented from April 20 through August 2012 in The Netherlands. The biennale, titled "Making City," addresses the future of cities. "The Paducah Project" is one of two city plans developed by UK College of Design for communities on the Ohio River as part of the "The River Cities Project."

The Paducah Gaseous Diffusion Plant once provided several thousand high-paying jobs, which have diminished over the years and will soon be eliminated upon the plant's closure. Rather than see job losses and legacy contamination as problems and causes for the region’s demise, the students looked at  those problems as the basis for a solution. The studio proposed a new economy generated by the complex process of cleaning up the site.

Associate Professor Rohrbacher has been impressed with the work the students have been doing on the projects and is excited for the college's opportunity to present their plan in Kentucky and internationally. "Students have been working hard for over a year now, they're focused on the work because they believe in it, and because they want to share their discovery that at least sometimes the solution lies directly within the problem," Rohrbacher said. "They also know that the prospects for successful real-world outcomes increase radically through distributed and networked collaboration and interaction."