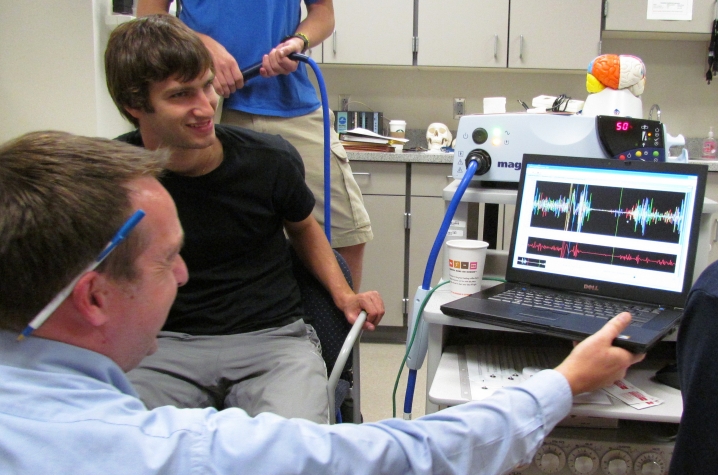 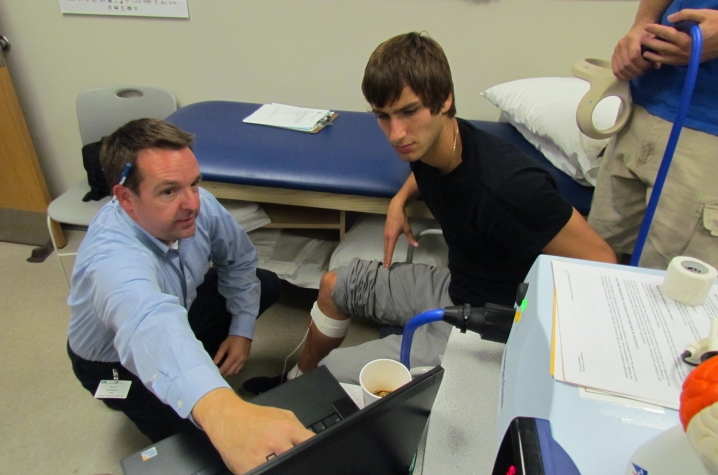 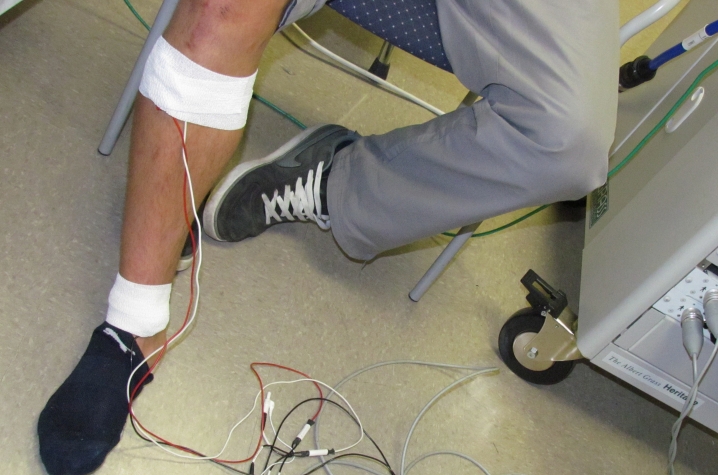 LEXINGTON, Ky. (Feb. 29, 2012) — A study recently published by the University of Kentucky's Scott Livingston shows that physiological problems stemming from a concussion may continue to present in the patient even after standard symptoms subside.

Currently, concussions are diagnosed and monitored through a patient's self-reported symptoms (including headache, confusion or disorientation, poor concentration, and memory loss) and through computerized neuropsychological testing programs, which measure cognitive abilities including attention and concentration, cognitive processing, learning and memory, and verbal fluency. Post-concussion abnormalities in either of these markers typically return to a normal level within five to 10 days following the injury.

Conducted while he was a graduate student at the University of Virginia, Livingston's study was just published in the February 2012 issue of the Journal of Clinical Neurophysiology. The study used motor-evoked potentials (MEPs) — an electrophysiological measurement that can provide hard evidence for changes in brain function — to determine if any physiological abnormalities followed a similar recovery pattern to self-reported symptoms and neuropsychological testing.

During an MEP test, subjects have electrodes placed on a limb – such as the hand or foot. A magnetic stimulating device is placed over  the head, and they receive a brief pulse of magnetic stimulation to the brain. The "reaction time" — the amount of time it takes for the subject's limb to receive the response from the brain  after the stimulation — is recorded.

Livingston's study enrolled 18 collegiate athletes — nine who had been concussed within the previous 24 hours, and nine who had not experienced a concussion. Each concussed subject was matched with a non-concussed subject using age, gender, sport, position played, prior concussion history, and history of learning disability or attention deficit-hyperactivity disorder as inclusion criteria.

Subjects were evaluated for evidence of concussion based on self-reported symptoms, computerized neurocognitive test performance, and MEPs for a period of 10 days. Post-concussion symptoms were more frequent and greater in severity in the immediate timeframe after the injury (24-72 hours) and decreased in the following days. Some subjects reported no symptoms by day 10, though others did not have complete symptoms resolution by that time. Neurocognitive deficits followed a similar pattern, proving greater just after the injury and returning to normal (or closer to normal) by day 10.

MEPs, however, showed delays in response time and smaller MEP size which continued up to day 10, with these physiological changes actually increasing as the concussed athletes’ symptoms decreased and cognitive functioning improved.

Livingston, director of the UK Concussion Assessment Research Lab and assistant professor in the Department of Rehabilitation Sciences, says these findings are significant for both athletes and sports medicine clinicians.

"Further investigation of MEPs in concussed athletes is needed, especially to assess how long the disturbances in physiological functioning continue after those initial ten days post-injury," Livingston said. "But in the meantime, sports medicine personnel caring for concussed athletes should be cautious about relying solely on self-reported symptoms and neurocognitive test performances when making return-to-play decisions."

Livingston's research lab recently began a new program to further study MEPs in athletes pre- and post-concussion. At UK, all athletes who participate in a contact sport — including football, soccer, volleyball, diving, gymnastics, and basketball — are assessed preseason using MEP and neurocognitive testing to establish a baseline measure for each athlete.

If an athlete receives a concussion, he or she will come back to the lab as soon as possible after the injury for follow-up testing. This approach allows researchers to get a clearer idea of the extent of an athlete's injury, Livingston says.

Neurocognitive tests, such as the Immediate Post-Concussion Assessment and Testing (ImPACT)™, are a valuable component of concussion management. While major professional sports organizations like the NFL and NHL, as well as hundreds of colleges, universities, and high schools across the United States follow this standard, UK Athletics did not have a formal, standardized neurocognitive testing protocol in place until last year.  The addition of the MEP assessment in the preseason testing and post-concussion management  are  unique — UK is the first and only collegiate athletics program to implement a baseline physiologic measure of brain function.

“No other college of university in the country is currently assessing physiologic brain responses and using this information to determine the extent of the functional brain injury," Livingston said. "This type of information enables us to closely track recovery, which may not correspond to the decrease in concussion symptoms or recovery of memory and other cognitive functions.”

Learn more about concussion research at UK with Drs. James Jagger, Dan Han, and Scott Livingston in "UK at the Half," a radio interview broadcast at halftime of the Feb. 11 UK-Vanderbilt basketball game.