LEXINGTON, Ky. (Nov. 13, 2018) — The National Institute of Neurological Disorders and Stroke (NINDS), part of the National Institutes of Health, announced that University of Kentucky's Matthew Gentry has received the Landis Award for Outstanding Mentorship.

Gentry, who is one of six grantees for the award's inaugural year, is a faculty member of the UK College of Medicine's Department of Molecular and Cellular Biochemistry. He is also co-Director of the Epilepsy and Brain Metabolism Alliance in the UK College of Medicine and Director of the multi-institutional, NINDS-funded Lafora Epilepsy Cure Initiative.

The Landis Award honors researchers who are at a specific career stage: junior, mid-career or senior faculty. The inaugural group of Landis Award grantees are junior faculty members who began tenure-track positions within the past five to 12 years. Award winners receive $100,000 to support their efforts in advancing the careers of students and postdoctoral fellows in their laboratories. Nominations for the award are sent from current and/or former trainees.

Gentry is noted for his research elucidating mechanisms of energy metabolism in both plant and human biology and the process whereby sugar molecules are broken down to provide fuel for cells. Errors in this process in humans can result in Lafora disease, a deadly congenital form of epilepsy.

Many of Dr. Gentry’s former trainees noted that he has had a tremendous impact on their lives. Projects are designed specifically with a student’s goals and career desires in mind, including providing appropriate training for those interested in non-research careers. Dr. Gentry creates a detailed mentorship plan with trainees early in their careers that includes developing their own projects and sending students to other labs, both nationally and internationally, when they need to learn specific skills not available in his lab.

"This award reflects the importance NINDS places on strong mentorship and grows out of our efforts to support the development of the next generation of neuroscientists," said Walter Koroshetz, M.D., director of NINDS.  "A good mentor is often what inspires young researchers to continue pursuing scientific careers and we are thrilled to support them with this important award."

The award is named for former NINDS Director Story Landis, Ph.D., who established programs to help promote the development of neuroscientists during her tenure from 2003-2014.

“Dr. Landis was a vocal advocate for junior scientists, " Gentry said.  "She provided outstanding mentorship and advice to me early during my career.” 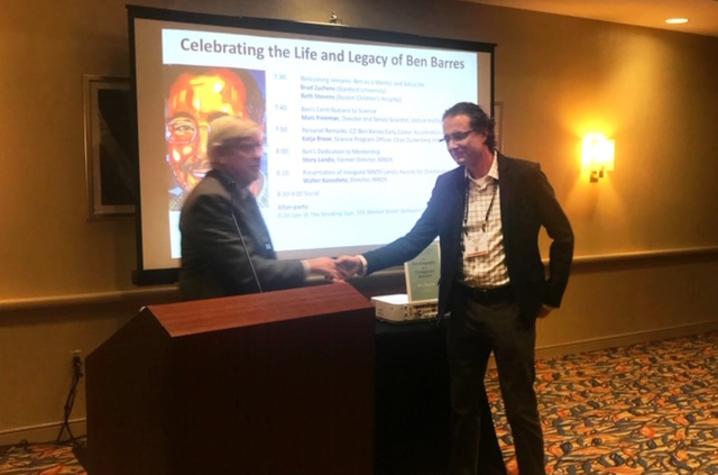 Matthew Gentry, University of Kentucky College of Medicine, receives the Landis Award for Outstanding Mentorship from the NINDS.