LEXINGTON, Ky. (Oct. 25, 2017) ― Jane Calvert, associate professor of history in the University of Kentucky College of Arts and Sciences, is committed to showing the human side of one of America’s Founding Fathers, John Dickinson, through the John Dickinson Writings Project.

As the Dickinson project’s founding director and chief editor, Calvert is collecting, transcribing, editing and publishing the complete writings of Dickinson, who wrote more for the American cause than any other Founding Father.

As a young history professor, disillusioned by American politics and culture of the late 1980s and early ‘90s, Calvert had a lot of questions about her homeland. And being a passionate historian, she naturally turned to history for answers.

In the midst of her dissertation on the history of Quaker society in America, she noticed that the name of one Founding Father “kept coming up, over and over.

“And so I thought, who is this guy, John Dickinson? When I looked at what historians had to say, they didn't know what to make of him either. They seemed confused, and they seemed to project their confusion onto him.”

But the more she researched Dickinson, “I thought, he's not confusing or confused, or conflicted. Or any of the things that historians were attributing to him. He made perfect sense to me. I went to a Quaker college, and I understood Quakerism. There was a lot that I really liked, really appreciated about Quakerism. But I never wanted to become a Quaker. And that was exactly Dickinson's position.”

Quakers call people like Calvert and Dickinson fellow travelers, she said. “We move in the same circles, we promote a lot of the same causes, have a lot of the same beliefs,” said Calvert, “but we don't want to ever really join for one reason or another. Dickinson's reason was that he was not a thoroughgoing pacifist. Dickinson advocated resistance to the British, but refused to sign the Declaration of Independence because he wanted the conflict to be resolved peacefully; without war.”

He was America's first political celebrity, said Calvert, active in America from the very beginning of the controversy at the Stamp Act Congress all the way through the ratification of the Constitution. He also advocated rights for women and Native Americans. He was the only Founding Father who freed his slaves and worked for abolition, she added. The month before Americans declared independence, the people turned to him to write America's first constitution, the Articles of Confederation.

Calvert’s first book, “Quaker Constitutionalism and the Political Thought of John Dickinson,” looks at the origins of the theory and practice of civil disobedience in Quaker thought and action in the 1660s, and traces it up into the American Revolution when Dickinson became the first advocate of a national program of civil disobedience. Her current book discusses the Quaker conception of rights and Dickinson's actions to bring that conception of rights to the American people. 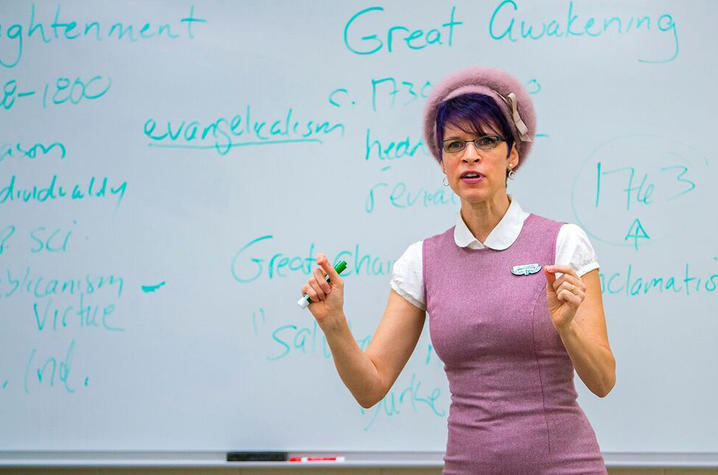