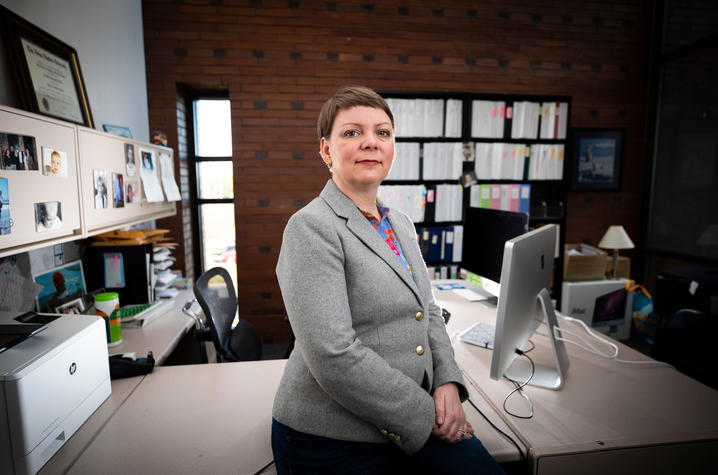 LEXINGTON, Ky. (May 16, 2019) – Jennifer Havens, Ph.D., professor of behavioral science in the University of Kentucky College of Medicine, faculty member in the Center on Drug and Alcohol Research and member of the team awarded $87 million through the National Institutes of Health’s HEALing Communities study, has spent the past decade studying the transmission of infectious disease and advocating for the expansion of harm reduction programs. That work entails understanding the link between two health burdens facing the nation, the opioid crisis and cancer.

These two health burdens may seem unrelated but research shows they are linked. Hepatitis C virus (HCV) is a blood borne viral infection that causes liver inflammation, which can cause liver damage. Untreated HCV, or significantly delayed treatment, can lead to the development of Hepatocellular Carcinoma, liver cancer. Havens has been examining the rise of injection drug use and the related outbreak of HCV.

With $15 million from the National Cancer Institute and National Institute on Drug Abuse and a donation of 900 doses of a 12-week treatment from Gilead Sciences Inc., Havens has the goal of eradicating HCV in Perry County.

A link between the opioid crisis and cancer may not be an association many people make. Prior to 1992, hepatitis C was most commonly transmitted through blood transfusions and organ donations. Today, it is commonly transmitted through the sharing of paraphernalia used to inject drugs. Because many people who inject drugs (PWID) become infected with HCV, curing it is important to preventing the development of liver cancer and to the prevention of the spread of the disease.

Kentucky has been a major part of the discussion surrounding the opioid epidemic, HCV outbreaks and cancer. From 2014 to 2015, Kentucky saw a 21 percent increase in overdose deaths related to opioid abuse. From 2008 to 2015, 1,089 new cases of HCV were reported in Kentucky. According the Centers for Disease Control and Prevention, in 2017 more than 47,000 Americans died as a result of opioid overdose.

Another result of the opioid epidemic, and injection drug use is Kentucky's place among seven states with HCV infection incidence rates that are twice the national average. Kentucky also leads the nation in cancer incidence and mortality, with 513.7 people per 100,000 being diagnosed with the disease.

Medications for treating HCV have greatly improved over time, and one course of medication, which ranges in duration from 8 to 12 weeks, has a nearly 100 percent cure rate with minimal side effects. Accessing this treatment hasn’t been easy for PWID, which is the primary issue Havens aims to address with her current project, KeY Treat.

In addition to providing treatment to any and all Perry County residents who are chronically infected with HCV, the grant funding will provide support for the syringe exchange program in the county and will help improve access to evidence-based treatment for opioid use disorder through a local treatment facility, Behavioral Health Group. Grant money will also be used for case management to assist with additional barriers, such as transportation and housing.

Treatment as prevention is the model Havens is studying with the KeY Treat project. She hopes through this study, a model for HCV treatment in rural communities will be built and that model can and will be used across the nation.

The epidemic of deaths from opioids is ravaging communities across the country with more than 350,000 deaths between 1999 to 2016. And, despite efforts to stem the public health crisis, the dramatic increase in deaths is contributing to a reduction in life expectancy in this country. At the University of Kentucky, however, we believe the tide can be turned. Researchers, clinicians and leaders at UK are working together with state and federal leaders to study the best prevention and treatment options and the most effective ways to deliver evidence-based care that is compassionate and comprehensive.