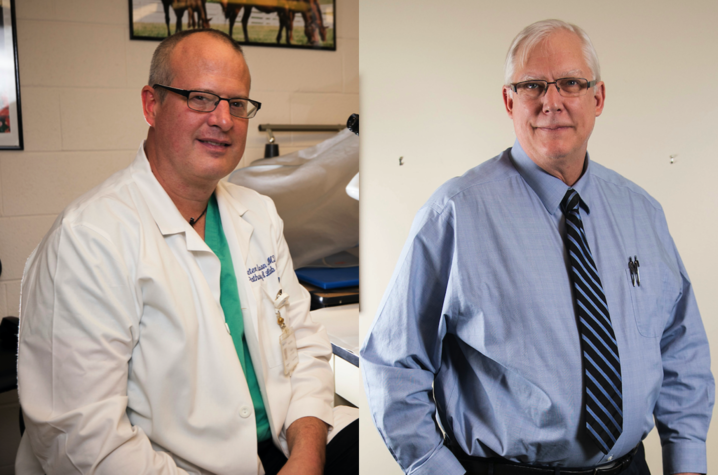 LEXINGTON, Ky. (May 11, 2020) — The University of Kentucky’s Sanders-Brown Center on Aging has been a leader in Alzheimer’s Disease related research for many years. The success seen at Sanders-Brown can be directly attributed to the people within the center.

“UK is fantastic at many things, but when it comes to driving the science and the search for cures for diseases like Alzheimer’s, we are second to none,” said Dr. Greg Jicha.

Thanks to that reputation it is not a surprise that two faculty members, including Dr. Jicha, have been tasked with leading national committees in the midst of a global pandemic. The committees are working in their respective areas to look at how to best navigate the impact of COVID-19 and how to minimize the negative effects on research.

Dr. Pete Nelson was elected by his peers in the research community as the chairperson of a steering committee for neuropathologists working at Alzheimer’s disease centers across the United States. The committee is helping lead and coordinate the neuropathology efforts within the centers during the COVID-19 crisis.

“The University of Kentucky Alzheimer’s Disease Center punches well above its proverbial weight class. We have a large impact on national and international efforts related to dementia research. It is an enormous privilege for me to work with such great colleagues and to help, even during the pandemic related shutdown, in the efforts to fight these horrible diseases,” said Nelson.

Due to the pandemic’s impact on large-scale research initiatives Jicha was appointed to lead two national committees. The first, in which he was elected by his peers, is the Clinical Core Steering Committee. Additionally, he was selected directly by the National Institute on Aging to serve on the National Alzheimer Coordinating Center Clinical Task Force on Clinical Measures and Diagnosis.

“This is a testament to the work that the University of Kentucky has done as a leading center in these national initiatives. I’m both honored and humbled to be given this opportunity to not only serve our nation, but most importantly every one of the millions of people in the United States suffering from cognitive decline, dementia like Alzheimer’s disease, and who are at risk for the future development of such diseases,” said Jicha.

Jicha says despite the ongoing COVID-19 situation it is “imperative” for the National Alzheimer’s Project Act (NAPA) that researchers continue to collect longitudinal data. “It is critical at this time that we develop uniform strategies for effective remote monitoring of disease state in our patients and research participants. I like to remind everyone that while COVID-19 has a 4% mortality rate, Alzheimer’s and the related dementias carry a 100% mortality rate. It is clear that this effort remains a national priority.”

Jicha is having an impact on the COVID-19 response through other roles in addition to the two committees. He also serves in an executive leadership role for the major Alzheimer’s disease clinical trials consortium. He says their focus has been on minimizing disruption to active pharmaceutical clinical trials that may serve as the first disease modifying treatments and/or cures.

“We cannot let COVID-19 stop the progress we have made as we stand on the horizon of a new day, a day in which our aging population may learn to no longer fear the devastation of dementia,” explained Jicha.

There is also a global impact of Jicha’s work in navigating COVID-19. In one of his roles, he is responsible for a portion of the scientific programming for the international Alzheimer’s conference which is going virtual this year to allow for social distancing. He says he has modified that programming to address the ways to minimize the impact of the virus on research. “UK is playing a leading role on both the national and international stage battling dementia while simultaneously confronting COVID-19 directly,” said Jicha.