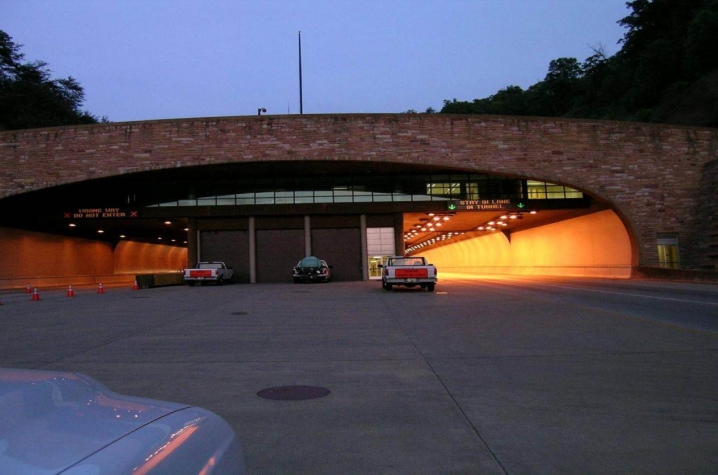 LEXINGTON, Ky. (June 15, 2012) — A summary of a research project by the Kentucky Transportation Center's Pavements, Materials, and Geotechnology section has been selected for inclusion in the American Association of State Highway and Transportation Officials (AASHTO) 2012 High Value Research compendium, “Re­search Impacts: Better - Cheaper - Faster.” The project, "Use of Ground Penetrating Radar for Void Detection and Hydro-Geochemical Water Testing Results at the Cumberland Gap Tunnel," has also been selected to be featured in the National Cooperative Highway Research Program (NCHRP) executive brochure “Research Makes the Difference 2012”.

Principal Investigator Brad Rister, Program Manager Clark Graves, and hydro-geochemist James Dinger of the Kentucky Geological Survey, alongside their team, performed ground penetrating radar (GPR) surveys and hydro-geochemical water testing (HGWT) to determine why the continuously reinforced concrete pavement had settled in various areas throughout the tunnel. Just 10 years after the tunnel's completion, approximately 7,300 total square feet of pavement surface had voids beneath it that ranged from 0.5 to 40 inches in depth.

The research results indicated that approximately 0.75 to 1.5 cubic yards of limestone sub-base material left the tunnel, in solution form, every month due to calcium deficient ground water beneath it. The project summary states that if the pavement were to fail, its impact would impose approximately $1.1 million of daily users’ cost on the traveling public.

"If the corrective measures outlined in the report are performed, it is highly likely that a catastrophic pavement failure will be averted in the near term," Rister said. "This report will also help identify a long-term inspection process that will assist in finding other distressed areas within the tunnel as they arise in the future."

The study determined that the best remediation strategy was to replace the existing limestone sub-base material with granite and rebuild the continuously reinforced pavement. The initial proposal was to replace approximately 2,800 feet of pavement in each tunnel at an approximate cost of $10,000,000. The GPR and HGWT results, however, allow crews to limit repairs to the isolated areas and save in excess of $5,000,000.

The Kentucky Transportation Center was established by the University of Kentucky Board of Trustees in 1979 and charged with addressing a broad range of transportation-related problems on an interdisciplinary basis.  Throughout its 33-year history, the center has conducted research on the physical, institutional, safety, economic, environmental, and security aspects of Kentucky’s (and the nation’s) multimodal transportation system.