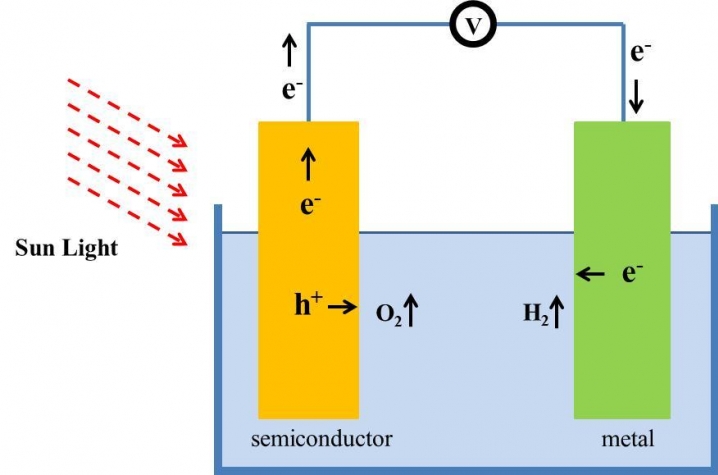 LEXINGTON, Ky. (Aug. 31, 2011) — Scientists from the University of Kentucky and the University of Louisville have determined that an inexpensive semiconductor material can be "tweaked" to generate hydrogen from water using sunlight.

The research, funded by the U.S. Department of Energy, was led by Professors Madhu Menon and R. Michael Sheetz at the UK Center for Computational Sciences, and Professor Mahendra Sunkara and graduate student Chandrashekhar Pendyala at the UofL Conn Center for Renewable Energy Research. Their findings were published Aug. 1 in the Physical Review Journal (Phys Rev B 84, 075304).

The researchers say their findings are a triumph for computational sciences, one that could potentially have profound implications for the future of solar energy.

Using state-of-the-art theoretical computations, the UK-UofL team demonstrated that an alloy formed by a 2 percent substitution of antimony (Sb) in gallium nitride (GaN) has the right electrical properties to enable solar light energy to split water molecules into hydrogen and oxygen, a process known as photoelectrochemical (PEC) water splitting. When the alloy is immersed in water and exposed to sunlight, the chemical bond between the hydrogen and oxygen molecules in water is broken. The hydrogen can then be collected.

"Previous research on PEC has focused on complex materials," Menon said. "We decided to go against the conventional wisdom and start with some easy-to-produce materials, even if they lacked the right arrangement of electrons to meet PEC criteria. Our goal was to see if a minimal 'tweaking' of the electronic arrangement in these materials would accomplish the desired results."

Gallium nitride is a semiconductor that has been in widespread use to make bright-light LEDs since the 1990s. Antimony is a metalloid element that has been in increased demand in recent years for applications in microelectronics. The GaN-Sb alloy is the first simple, easy-to-produce material to be considered a candidate for PEC water splitting. The alloy functions as a catalyst in the PEC reaction, meaning that it is not consumed and may be reused indefinitely. UofL and UK researchers are currently working toward producing the alloy and testing its ability to convert solar energy to hydrogen.

Hydrogen has long been touted as a likely key component in the transition to cleaner energy sources. It can be used in fuel cells to generate electricity, burned to produce heat, and utilized in internal-combustion engines to power vehicles. When combusted, hydrogen combines with oxygen to form water vapor as its only waste product. Hydrogen also has wide-ranging applications in science and industry.

Because pure hydrogen gas is not found in free abundance on Earth, it must be manufactured by unlocking it from other compounds. Thus, hydrogen is not considered an energy source, but rather an "energy carrier." Currently, it takes a large amount of electricity to generate hydrogen by water splitting. As a consequence, most of the hydrogen manufactured today is derived from non-renewable sources such as coal and natural gas.

Sunkara says the GaN-Sb alloy has the potential to convert solar energy into an economical, carbon-free source for hydrogen.

"Hydrogen production now involves a large amount of CO2 emissions," Sunkara said. "Once this alloy material is widely available, it could conceivably be used to make zero-emissions fuel for powering homes and cars and to heat homes."

Menon says the research should attract the interest of other scientists across a variety of disciplines.

"Photocatalysis is currently one of the hottest topics in science," Menon said. "We expect the present work to have a wide appeal in the community spanning chemistry, physics and engineering."