LEXINGTON, Ky. (July 12, 2022) — For police officers, de-escalation training is critical — greatly reducing the use of force and the likelihood that anyone will be hurt during a confrontation.

But preparing for a peaceful end can be challenging when officers can find themselves in a variety of scenarios.

That’s where Stephen Ware, assistant professor in the College of Engineering at the University of Kentucky, comes in.

“We’re trying to use technology to do something good — to create intelligent training for de-escalation with the purpose of calming everyone down and creating a safe environment for police officers and the community they serve,” he said.

The honor is one of the “most prestigious awards in support of the early career-development activities of teacher-scholars who most effectively integrate education and research within the context of their organization’s mission,” according to the NSF.

The program will provide Ware with more than $530,000 over five years to conduct research using artificial intelligence and virtual reality to create immersive police training for de-escalation.

“This grant is allowing us to build a virtual reality police de-escalation training simulation, which is a lot of buzzwords. But basically, you walk into a big empty space, you put on a virtual reality headset that blocks out your vision of the outside world and replaces it with the inside of a video game,” he explained. “In this scenario, you’re the police officer, and it’s your job to de-escalate a potentially dangerous situation.”

The unique training environment aims to be both immersive and realistic. But creating that experience is far from easy.

“Not just any sequence of events will do. You put a human player into this situation, and especially if it’s someone who maybe hasn’t played a lot of video games before, they do all kinds of unexpected things,” Ware said. “Having an algorithm that can respond to those unexpected situations and still create a believable and useful training simulation is really challenging. Navigating those trillions of possibilities and figuring out which ones are going to seem realistic and are going to be a useful training exercise is the computer science challenge behind what we’re doing.”

But Ware — and his team of graduate students — are up for the challenge.

“I like waking up every morning and working on something that no one’s ever done before. There’s a small, but growing, artificial intelligence research community that’s working on storytelling. And I love to collaborate with those people to train the next generation of students that are working on these problems and to say, ‘Hey, it would be really cool if AI could do this. No one currently has a solution. I wonder if we can design it.’”

Ware, who started at UK in 2019, directs the Narrative Intelligence Lab and teaches artificial intelligence and game development courses. His work has earned three best paper awards to date. Since 2014, he has received more than $2.4 million in sponsored research funding from federal, state and local agencies. Ware serves as a referee for the IEEE Transactions on Games journal and as an organizer for top conferences and workshops in his field, such as the AAAI international conference on Artificial Intelligence and Interactive Digital Entertainment. 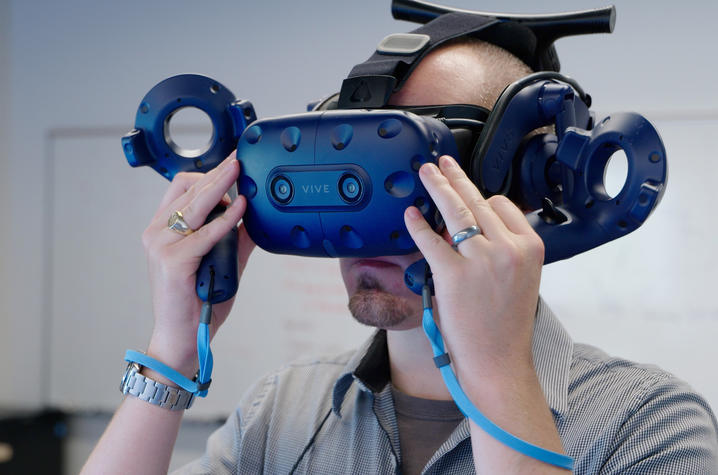