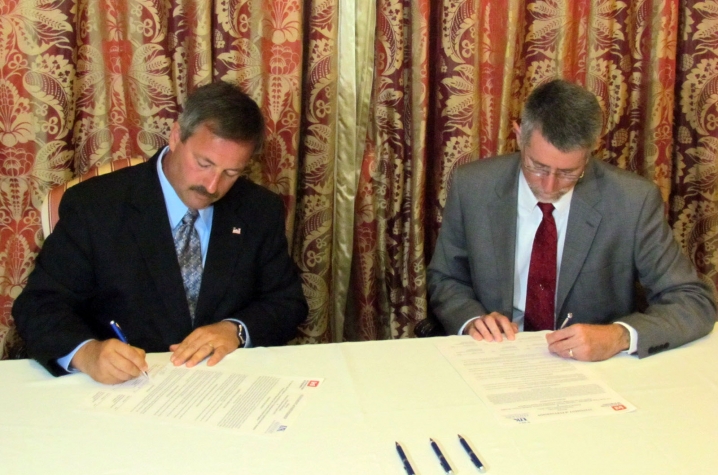 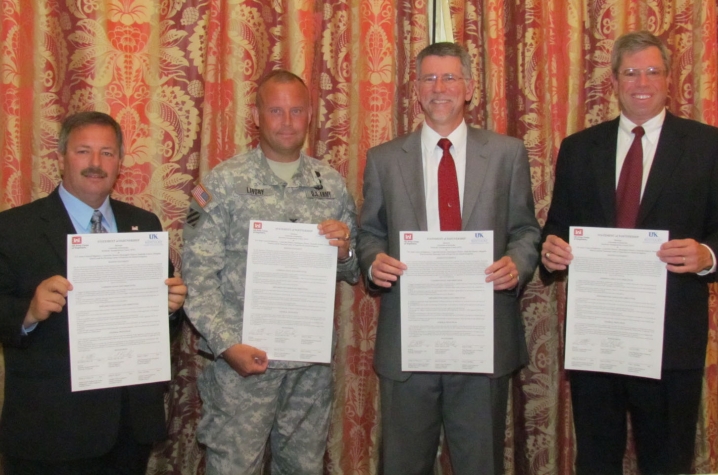 LEXINGTON, Ky. (July 11, 2011) − The Kentucky Transportation Center (KTC), based in the University of Kentucky College of Engineering, and the U.S. Army Corps of Engineers (USACE) signed a formal Memorandum of Agreement today to recognize the significant collaboration between the two entities that focuses on their shared interests in waterways research. The official signing took place at the Hilary J. Boone Center on UK's campus.

The KTC, a multi-disciplinary research center looking at all modes and all aspects of transportation, is partnering specifically with the Louisville, Huntington, Nashville and Memphis districts of the USACE, as well as the Planning Center of Expertise for Inland Navigation located in the Huntington district.

“This agreement represents a major step forward in our efforts to become established as a center of excellence for inland waterways transportation,” said Joe Crabtree, director of the KTC.  “Kentucky is ideally positioned to be a national leader in advancing waterways transportation, and we are thrilled to be able to work alongside our partners with the Army Corps of Engineers as we pursue our mutual goals.”

One of the major goals of the agreement is to engage stakeholders, such as the U.S. Maritime Administration, the U.S. Coast Guard, manufacturing industries, barge companies and the economic development departments, to help better identify relevant waterways issues. This can include issues like the reliability of systems, shipping costs and transit times.

The agreement also signifies efforts to provide higher value innovations and services that speak to the aforementioned issues and identify economic development and environmental stewardship opportunities, all of which will advance the USACE's objectives and set the KTC on a path toward increasing capabilities in inland waterways research. To achieve these goals, the KTC and USACE will collaborate on information and data sharing, action plan coordination, community outreach and issue identification and knowledge transfer.

David Dale, deputy district engineer for the Louisville District of the USACE, offered his insights on the agreement: "Collaborative planning at the local, state, and federal levels is essential to addressing the waterways transportation needs of the Commonwealth and the region.  We must continue to look for ways, such as this vital partnership, to leverage limited resources and share information for the benefit of the nation."

The effort to collaborate began over a year ago, when the KTC realized the breadth and depth of the USACE's commitment to the inland waterways of the U.S.

“The Army Corps of Engineers plays a central and critical role in waterways transportation throughout the United States,” Crabtree said.  “They build and maintain the infrastructure, they gather data on the use and performance of the waterways system, and they conduct research to identify key issues, challenges, and solutions.  From day one of our relationship, they have proven to be outstanding partners.”

The Kentucky Transportation Center was established by the UK Board of Trustees in 1979 and charged with addressing a broad range of transportation-related problems on an interdisciplinary basis.  Throughout its 32-year history, the center has conducted research on the physical, institutional, safety, economic, environmental, and security aspects of Kentucky’s (and the nation’s) multimodal transportation system.  The center currently employs just over 100 people, including 30 students.