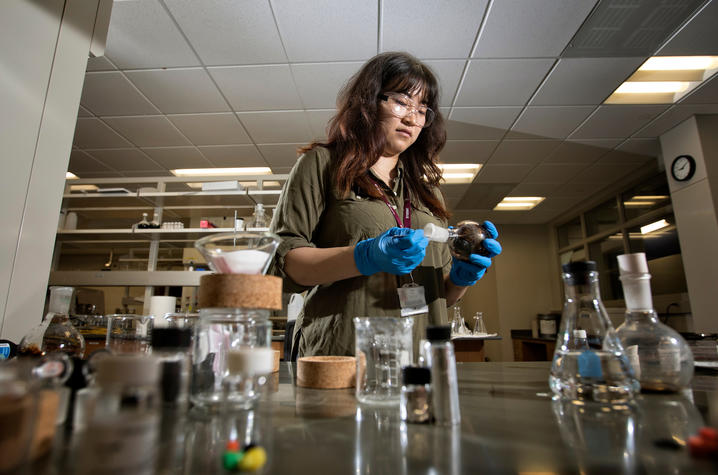 Yang Song, a doctoral student in the UK Department of Chemistry and researcher in at the UK Center for Applied Energy Research (CAER), helped lead the research effort on this project.

LEXINGTON, Ky. (Oct. 1, 2018) — When Mark Crocker and the biofuels research team at the University of Kentucky Center for Applied Energy Research (CAER) began their work to convert lignin into biofuels and chemicals, some called it a biofuels gold rush.

Little did anyone know how important gold would become to the actual research.

Utilizing a gold-based catalytic system developed in CAER’s Biofuels and Environmental Catalysis Laboratory, the center’s researchers have discovered a method to turn lignin into valuable aromatic compounds. The process is featured in Chemistry World, which is published by the Royal Society of Chemistry.

Crocker’s group has been studying lignin conversion since 2010. At that time, many researchers were studying cellulose and its conversion to fuels and chemicals. However, as Crocker noted, cellulose has great use as a commodity, while lignin is often considered a waste. As the Chemistry World article states, only 2 percent of leftover lignin from the paper industry is converted into valuable materials, while the rest is burned as a low-grade fuel or deposited into landfills.

The article describes the process uncovered in CAER’s lab: “Now, Crocker’s team has reported a breakthrough in the heterogeneously catalysed oxidative depolymerisation of lignin, using gold nanoparticles supported on a lithium–aluminum layered double hydroxide. By targeting the abundant β-O-4 linkage within lignin, the group obtained low molecular weight aromatic monomers such as vanillin, vanillic acid and syringaldehyde. These monomers are typically used in the food and fragrance industry, but can also serve as pharma precursors, and have market values of $4,000–14,000 per tonne.”

As Crocker notes, this research is still in its infancy. Further research is needed before someone could commercially manufacture these aromatics. But the research is promising and is a complement to CAER’s burgeoning materials research and development portfolio.

“One of the hallmarks of UK CAER is this idea of taking a product that many consider to be a waste and turn it into a valuable product,” said Crocker, who is also a faculty member in UK’s Department of Chemistry. “If you walk around the center and talk to colleagues, it is amazing how many different research programs started with the simple idea of taking a waste stream and creating some new and different from it.”

Yang Song, a doctoral student in UK's chemistry department and researcher in the Biofuels and Environmental Catalysis lab, helped lead the research effort on this project.

“I am very lucky to have struck gold given this project (pun intended), and a lot of time and effort went into the work that we published,” Song said. “The material we published and the results we obtained would not have been possible without the help of all of our collaborators and colleagues here at CAER. Hopefully together we can make even bigger leaps into the lignin valorization frontier in the future.”