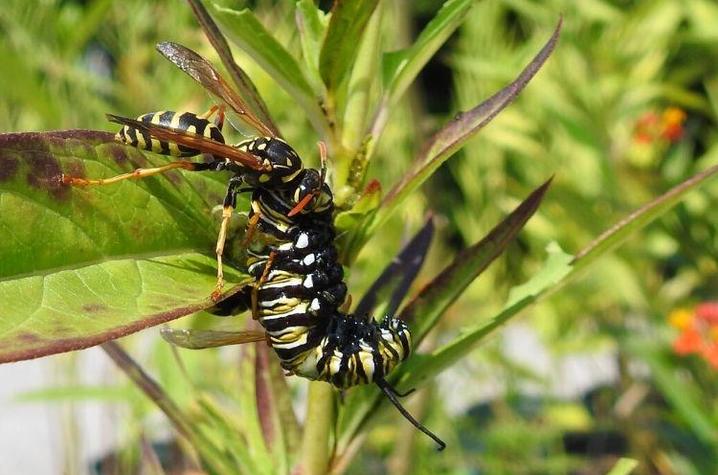 LEXINGTON, Ky. (July 16, 2020) — An invasive paper wasp may be stymying the efforts of urban gardeners to rebuild monarch butterfly habitats, according to recent research by University of Kentucky entomologists.

Adam Baker, UK doctoral student, and Daniel Potter, UK entomology professor, found Polistes dominula, more commonly known as the European paper wasp, preying on monarch larvae on milkweed plants in urban pollinator gardens. The wasp was accidentally introduced in the U.S. in the 1970s and is well established throughout the country, particularly in urban areas.

“Only about 5% to 10% of monarchs make it from egg to adulthood. While some of their mortality is due to host plant defenses, far more is likely due to natural enemies preying on them,” Baker said. “In our study, Polistes dominula was the most common wasp seen hunting caterpillars in Central Kentucky gardens. We think it may be a game-changer for urban monarch conservation."

The UK College of Agriculture, Food and Environment entomologists observed the outcomes of 120 encounters between the paper wasps and various sizes of monarch larvae. The wasps killed most of the smaller larvae, carrying them off whole or cutting them into pieces before flying off to feed them to their developing young. In contrast, most large monarch caterpillars were able to escape the wasps by thrashing or dropping off the plant.

In the study, wasps were far more likely to prey on monarch larvae in urban gardens than in rural habitats bordered by woodlots. The entomologists suspect this is likely due to the urban gardens' close proximity to buildings. The wasp prefers to build its nests under eaves, in cavities or other sheltered places in or around human-built structures.

Their study also showed that ornamental butterfly boxes, which well-meaning gardeners put up in the hopes of providing shelter for butterflies and to add aesthetic interest to gardens, may be inadvertently attracting the wasps.

“We found active wasp nests in 16 of 22 boxes in the six urban gardens we surveyed, but we saw no signs of butterflies using the boxes,” Baker said.

The entomologists also suspect that wasps could be attracted to other wooden structures commonly found in or near gardens, such as birdhouses.

According to UK entomologists, people interested in gardening for monarchs and other butterflies can reduce losses to wasp predation by repairing or securing any structures near gardens that might be attractive nesting sites. If wasp nests are found, gardeners can spot treat them using wasp or hornet spray or have a professional do so.

The study was recently published in the academic journal, Scientific Reports. It is available for free, online at www.nature.com/articles/s41598-020-66621-6.