LEXINGTON, Ky. (March 4, 2022) — It’s not often that seeing something you built set ablaze is cause for celebration. However, for a team of University of Kentucky students and scientists, triumph was found in seeing their work survive a fiery entry and safely land in the middle of the Pacific Ocean.

At 12:55 a.m. on Dec. 15, 2021, two Kentucky Re-entry and Universal Payload System (KRUPS) capsules entered the atmosphere and were set on fire by the extreme temperatures they experienced at more than 20 times the speed of sound.

At that moment, UK made history with three “firsts”:

The data — temperature measurements recorded over a 9-minute span — will help scientists build better thermal protection systems (TPS). These systems protect a payload — whether astronauts, equipment or scientific instruments — during the harsh flight into the atmosphere of a distant planet or on its return to Earth.

This mission, named the Kentucky Re-Entry Probe Experiment (KREPE), gathered TPS data with KRUPS capsules. These capsules were built by UK College of Engineering students and faculty, with funding from NASA, NASA EPSCoR, the NASA Kentucky Space Grant Consortium and EPSCoR Programs, the KY Statewide EPSCoR Committee and the Cabinet for Economic Development.

The UK team began building three capsules in summer 2020. Two capsules had LI-2200 TPS (Space Shuttle Orbiter tiles) fabricated by the NASA Ames Research Center. The third capsule had a novel 3D-printed TPS, developed by Oak Ridge National Lab, NASA Johnson Space Center and NASA Ames Research Center. One of the LI-2200-equipped capsules did not complete the mission, due to an activation failure onboard the International Space Station, but the other two capsules successfully transmitted data.

“This real-flight temperature data will allow us to enhance our computer simulations and design more efficient and more effective thermal protection systems," said Alexandre Martin, professor of mechanical and aerospace engineering who led the team. "It’s exciting to have the work of students — who have been developing the KRUPS capsules over many years — culminate in this history-making flight experiment.”

Learn more about the KRUPS capsules and UK’s role in the Advanced Computational Center for Entry System Simulation (ACCESS): 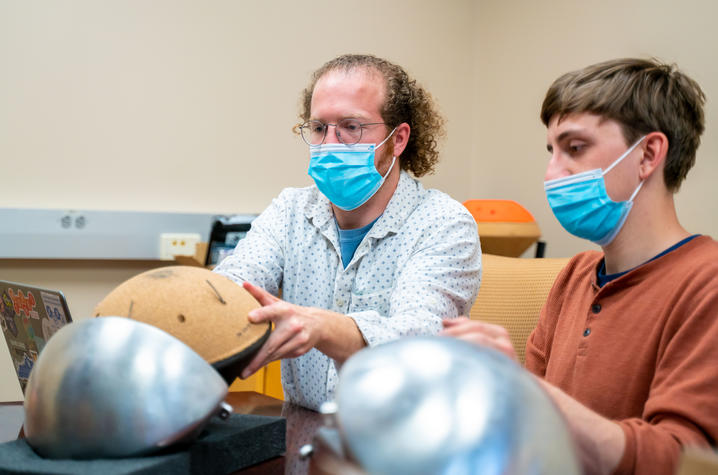 A team of UK students and scientists built three capsules and successfully got data as they were set on fire as they re-entered Earth's atmosphere at more than 20 times the speed of sound. Ben Corwin | Research Communications