LEXINGTON, Ky. (Nov. 7, 2019) — Josh Van Wyngaarden grew up in a military family, traveling all over the world during his father’s 22 years in the Air Force.

The University of Kentucky College of Health Sciences doctoral student was in high school when 9/11 occurred. It moved him to follow in his father’s footsteps by applying for the Air Force Academy, where he studied for four years. Knowing he wanted to pursue a medical career, he ultimately chose the path of physical therapy, earning his doctorate of physical therapy at San Antonio’s Army-Baylor DPT Program.

While in San Antonio, Van Wyngaarden worked at the Brooke Army Medical Center’s Center for the Intrepid, a rehabilitation facility where military wounded warriors receive treatment for blast-related injuries experienced during deployment. Despite evidence-based treatment, many of the patients ultimately developed chronic pain.

“Chronic pain and suffering were such huge problems in that population,” he said. “I knew then we need to find better ways to figure out who’s at risk for a bad outcome.”

Van Wyngaarden spent the next several years traveling the world himself: a stint at Wright-Patterson Air Force Base in Ohio, where he practiced clinical physical therapy. An assignment to Charleston Air Force Base in South Carolina, where he helped build a platform to transport patients with Ebola from West Africa to the United States for treatment. A humanitarian mission in Nepal to provide health care to people in need. Finally, a deployment to South Korea, where he both directed the physical therapy clinic and also led the team in charge of base decontamination in the case of a chemical, nuclear or biological attack.

With years of experience in the field, Van Wyngaarden then decided to pursue a Ph.D. in rehabilitation sciences, which would allow him to teach and conduct research on the mechanisms behind chronic pain. The good news: the Air Force would cover the cost of his degree for three years. The bad news: most Ph.D. programs in the country take 4-5 years, and very few were willing to accelerate their programming to meet that three-year requirement.

Fortunately, the University of Kentucky has a known track record of working with both active duty service members and veterans to achieve their scholarly goals. Van Wyngaarden emailed Brian Noehren, associate professor of physical therapy in the UK College of Health Sciences, to inquire about the possibility of getting his doctorate in three years.

“When Josh reached out to me, I really thought long and hard about this – the fact that it was a year shorter for a Ph.D. is a really big deal,” Noehren said. “But I really felt that commitment to our service members, and I wanted to find a way that Josh could be successful here.”

Noehren set up regular FaceTime meetings with Van Wyngaarden while he was still stationed in South Korea so he could begin working ahead of his arrival. The 13-hour time difference meant that one of the two was working early while the other worked late, but the effort paid off.

“A lot of times, it takes a year or more for the student to really settle into their topic,” Noehren said. “But he was able to come in and hit the ground running.”

Van Wyngaarden’s research at UK is inspired by his time at the Center for the Intrepid: he’s studying the potential for chronic pain in patients who have suffered a significant lower extremity fracture that required surgery. Working with UK HealthCare orthopaedic surgeon Dr. Paul Matuszewski to identify patients who agree to participate in the study, Van Wyngaarden monitors patients for 12 months after surgery, conducting surveys and sensory testing to determine possible risk factors for chronic pain.

He’s particularly interested in the psychosocial aspects of recovery – in other words, what psychological and environmental factors might play a role in whether patients develop chronic pain over the years. Those issues were prevalent during his time working with wounded veterans.

“A lot of those guys did really poorly – understandably – not just because of the trauma of the injury, but also the psychological influence of seeing their best friends injured or killed in action,” Van Wyngaarden said. “I saw the influence those factors carried in those patients, and I wanted to see how that played out in a less severe traumatic injury population.”

The ultimate goal of the study is to determine which factors are most influential toward the development of chronic pain, and then create a screening platform that can categorize patients into different levels of risk. For example, a low-risk patient would recover as expected with standard of care; however, a high-risk patient may need some supplemental care focused on mental health to help control pain throughout recovery.

While that goal has obvious applications in the military setting, it also has the potential to make an impact on a public health issue that’s particularly impacted the Commonwealth: the opioid crisis. Noehren notes that Van Wyngaarden’s work is unique and possibly the first of its kind.

“With orthopaedic trauma, almost half of patients develop chronic pain and are at risk of long-term use of opioids,” Noehren said. “The best way to prevent opioid use disorder is to not need opioids in the first place. Josh’s work will give us really important insights for non-pharmacological treatments that we can administer to people before they develop chronic pain both in and outside the military setting.”

Though his work is ongoing, Van Wyngaarden says they’re noticing definite trends: they can reliably predict those who are at risk for chronic pain at the six-month mark, and they are working to see if that trend holds at 12 months. So far, the most consistent predictor of pain and poor physical function is self-efficacy.

“It’s basically the person’s belief and confidence that they can work through an injury – despite any pain they might be having – and return to full activity,” he said.

In addition to the insights his research is providing, Noehren says having a student with Van Wyngaarden’s experience has been valuable for the whole rehabilitation sciences program.

“It’s been great to have him in our lab because he sees things a little differently,” Noehren said. “Having an actual service member who’s treated individuals wounded in combat has been really important for us. The military system of medicine is different than the civilian, and I think it’s been enriching for our undergraduate and other graduate students who are just now becoming acquainted with the different health care systems.”

Early next summer, Van Wyngaarden will finish up his degree and defend his dissertation. Though he’s not yet sure of his next assignment, he says he’ll likely be heading back to the Army-Baylor program to teach and train the next generation of military physical therapists.

But he’s not finished with UK just yet – in addition to future intervention studies he’ll develop in his new role, he’ll also continue to collaborate on research with Noehren and Matuszewski. The team has secured funding for their work, which will take them through several more years of research.

But wherever Van Wyngaarden’s career may take him, Noehren says he’s poised for great things.

“We push people in our labs to really take risks and try new and bold ideas, and he has definitely done that,” Noehren said. “I’m really excited to see his future career trajectory. He’s on track to do some amazing things both inside and outside of the military.” 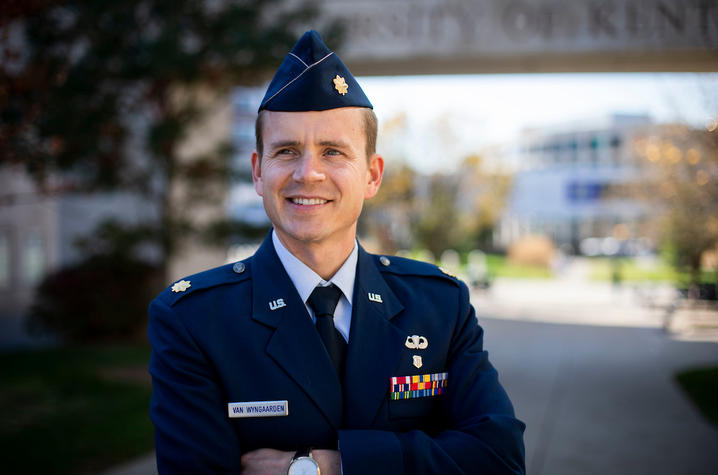