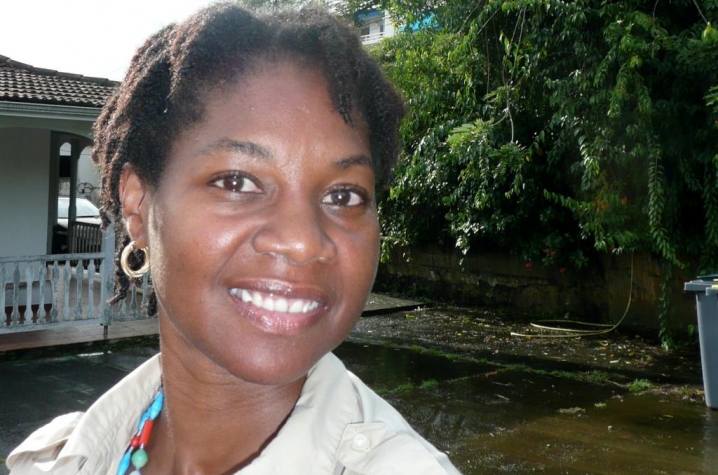 LEXINGTON, Ky. (Sept. 29, 2010) −During the summer of 2010, Jacqueline Couti, a new professor in University of Kentucky's Division of French and Italian Studies, took a research trip back to her native Martinique to gather information on poet and politician Aimé Césaire.

Césaire was an integral figure in the creation of Négritude, a literary and cultural movement that rejected colonialism and promoted positive racial consciousness by elevating black humanity and fighting oppression. Césaire was also responsible for founding the Martinican Progressive Party in 1958.

“His contribution to modern and postcolonial thought cannot be measured,” Couti said. “For many this promotion of blackness goes beyond borders and transcends the human condition.”

Couti was asked to participate in a project putting together documents for a new critical edition on Césaire, who passed away in 2008. She accepted the invitation – “you can’t say no to Césaire,” she remarked – and set about the research process with modest expectations. “I went there to work on my own research, and I found more. I became aware that I was just beginning something bigger,” she said.

After discussion with Césaire’s surviving family, Couti was the first scholar allowed to sort through the documents in Césaire’s home office. She was granted this access by Marc Césaire, Aimé Césaire’s son, on behalf of the family.

“No one before was able to sort through Césaire’s documents,” Couti said. The family, not wanting Césaire’s image to be exploited, still provided researchers with access to documents while discerning which project(s) would most appropriately reflect his legacy.

“My project was in-sync with the family’s commitment to preserve the memory of Aimé Césaire,” she explained.

Couti hoped to find documents about “A Tempest,” Césaire’s postcolonial adaptation of Shakespeare’s “The Tempest,” but what she found was a wealth of documents that sheds new light on Césaire’s creative processes.

“There were books that I found underlined, with his handwriting. The academic world doesn’t really know about those books; they could give a better understanding of his sources of inspiration,” she said.

Couti also discovered unfinished poems and, importantly, an unpublished version of “A Tempest” with modified pages intended to replace sections of his previous editions.

“These documents may help researchers recalibrate their approach [on Césaire]. It will be interesting for scholars to see how his thoughts were organized and reorganized,” she explained.

But even among the numerous documents Couti uncovered, one thing stood out.

“Césaire wrote a letter to Maurice Thorez in 1956 saying that he will resign from the Communist Party,” Couti explained. “But I found Thorez’s response to him, typed and signed. We all know about this famous letter that Césaire wrote, but no specialists I know of have ever mentioned Thorez’s reply.”

Since he had a long career as a politician in addition to being an author and poet, this discovery can help scholars better understand Césaire’s political vision and his relationship with Maurice Thorez.

“Since 1956 Césaire kept that letter. It’s not a long letter but it’s significant.”

As a native Martinican, this research had particular personal value for Couti. “I really feel blessed and special. It’s not simply research, it’s helping to perpetuate a part of my culture,” she said.

Couti describes the process as exciting and humbling. “Just to be a part of this project and to sit in his chair, to work at his desk, look through his personal archives…for me that’s a great opportunity. But it’s also a great responsibility,” she said. “All of that needs to be preserved. I realized the importance of going there to preserve things, to perpetuate the legacy.”

With this in mind, Couti left the Césaire family with digital copies of all of the documents she organized to help in their plans to create a center dedicated to his work.

Couti also did research outside of Césaire’s home, receiving special permission from the Counseil Général of Martinique to reproduce precious texts about Césaire in the André Breton holdings of the Bibliothéque Schoelcher.

As she prepared to leave, however, Couti learned that her project was only beginning.

“The day I left Colette Césaire (Marc Césaire’s wife) showed me another library I didn’t know about, with hundreds of books that Césaire had,” she said. “I knew I had to go back.”

Couti will present her findings this month to her fellow scholars from the Agence Universitaire de la Francophonie (AUF), a network of French-speaking research institutions. The group working on the Césaire project will convene in Paris to share their research and collaborate on publishing their findings.

In spite of her modest expectations, there is no telling how Couti’s research could inevitably influence future of scholarship on Césaire.