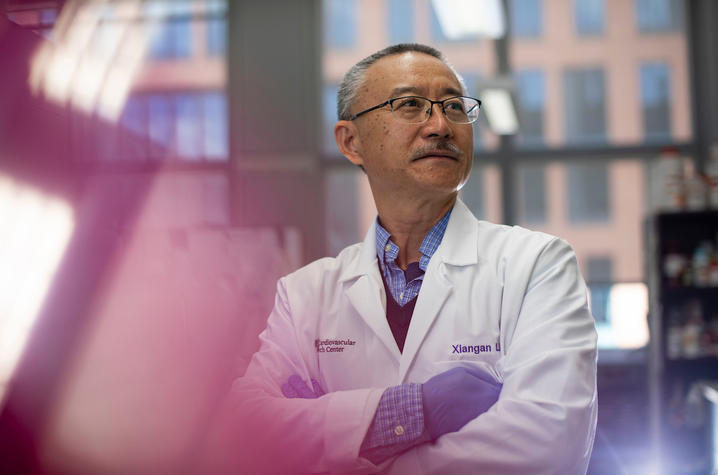 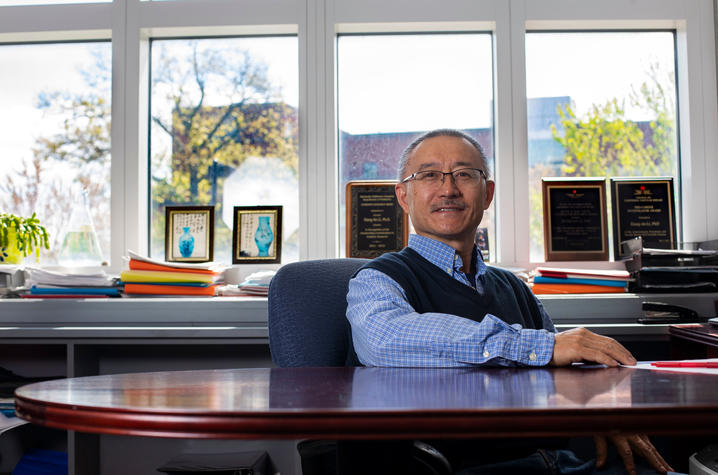 LEXINGTON, Ky. (May 6, 2021) — A University of Kentucky College of Medicine professor has been awarded a $1.9 million National Institutes of Health (NIH) grant for his research on the body’s immune response to sepsis, which could potentially help to improve therapies for the common disease.

Xiangan Li, a professor in the Department of Physiology and the Saha Cardiovascular Research Center, received the prestigious R35 grant from the NIH’s National Institute of General Medical Sciences (NIGMS), which will fund sepsis research in his lab over the next five years.

Sepsis is a life-threatening condition that occurs when an infection triggers a chain reaction throughout the body. Without timely treatment, it can quickly lead to tissue damage, organ failure and death. The Centers for Disease Control and Prevention reports that nearly 270,000 Americans die as a result of sepsis every year, and one in three patients who die in a hospital has sepsis.

Li studies how hormones called glucocorticoids regulate the body’s immune system in response to sepsis. Glucocorticoids are released by the adrenal glands and help to reduce certain aspects of immune function such as inflammation. They are often supplemented as a therapy to treat sepsis and other diseases caused by an overactive immune system. However, not all sepsis patients may benefit from additional glucocorticoids, Li says.

“Thirty to 60% of sepsis patients have an impaired adrenal stress response and cannot produce enough glucocorticoids,” said Li. “But for the others, supplementing glucocorticoids may not be necessary or beneficial.”

Li says the findings provide an explanation for why the current glucocorticoid therapy for sepsis is controversial, as the therapy is given to patients without considering the status of adrenal insufficiency. Li proposes that before giving glucocorticoids to septic patients, a precision medicine approach should be taken to identify whether or not they have an adrenal insufficiency.

Research in Li’s lab will continue to give scientists a better understanding of the role glucocorticoids play in immune function, which could ultimately lead to improved patient outcomes for sepsis.

“The mechanisms behind glucocorticoids and immune regulation may be different than previously understood,” Li said. “The ongoing research funded by this grant will answer questions that we hope will improve the overall efficacy of sepsis therapy and save many lives.”

The NIGMS aims to support basic research that increases the understanding of biological processes and lays the foundation for advances in disease diagnoses and prevention. The NIGMS’ R35 grant, also called the Maximizing Investigators Research Award (MIRA), increases the efficiency of NIGMS funding by providing researchers with greater stability and flexibility, thereby enhancing scientific productivity and the chances for important breakthroughs.