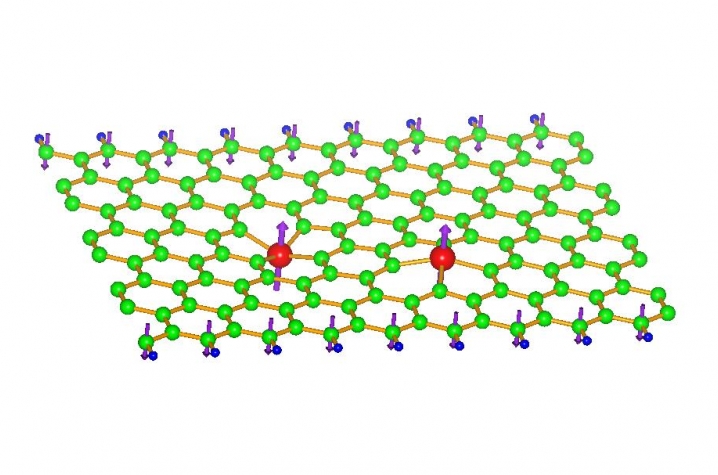 LEXINGTON, Ky. (May 4, 2012) — A team of theoretical physicists from the University of Kentucky and University of South Florida has taken a big step toward the development of practical "spintronics" based on graphene, which promises to make electronic devices smaller and much faster than today's silicon-based technology.

The research, funded by the U.S. Department of Energy, was led by Professor Madhu Menon at the UK Center for Computational Sciences and Sergey Lisenkov at the University of South Florida. Their findings were published today in Physical Review Letters.

Spin is a quantum mechanical property that has a binary directional value, either "up" or "down." This is analogous to the "on/off" property that enables binary digital coding in modern computers. A key advantage to potential spintronics devices is that once the direction of the spin is set, no energy is required to keep it that way. Thus, data stored using spintronics will not disappear when the electric current stops.

An important step toward fabrication of spintronics ("the Holy Grail," Menon says) is finding a semiconductor that has a net "spin" at room temperature. The biggest challenge is in finding a suitable material and figuring out how to set the spin. The UK-USF team showed that a flat sheet of pure carbon only one atom thick, called graphene, can be suitably engineered and used for this purpose when combined with atoms of the metallic element cobalt.

"Control over the directionality of spin is critical for practical spintronics applications," Menon said. "Hopefully, our findings will open new venues for industrial applications of graphene."

Using state-of-the-art theoretical computations, the UK-USF team demonstrated that by placing cobalt atoms in graphene "holes," created by removing one or two nearby carbon atoms, it is possible to set the spin states of the carbon atoms in a controlled way, which the researchers say is key to practical spintronics application for graphene.

Despite its single-atom thickness, graphene is a relatively tangible material. In fact, anyone can make a small quantity of graphene by "peeling" ordinary graphite (the substance that makes up the "lead" in an ordinary pencil) with clear plastic tape.

Graphene is one of the toughest materials ever tested, with a breaking strength 200 times greater than steel. Of particular interest to the electronics and data-storage industries, graphene is also highly conductive, allowing electric currents to pass through it about 100 times faster than silicon.