In this 2019 video, UK scientists explain the implications of their work assembling the genome of the Mexican axolotl.

LEXINGTON, Ky. (Oct. 5, 2021) — University of Kentucky College of Medicine researchers were part of a new study that gives insight into how limb development evolved in vertebrates.

In the limbs of all tetrapods, the bones on the hands and feet on the outside edge form first, known as postaxial development. The study focuses on salamanders, which are the only exception to this rule: their limb bones develop preaxially, or from the inside edge; the thumb before pinky.

“For more than 100 years, scientists have wondered if preaxial development evolved uniquely in salamanders,” said study co-author Randal Voss, Ph.D., University Research Professor in the Department of Neuroscience and Director of the Ambystoma Genetic Stock Center. “Now we understand that it’s ancestral to the postaxial mode seen in all other tetrapods. Salamanders are not unusual, they simply retained the ancestral mechanism of vertebrate limb development.”

In both mice and axolotl salamanders, researchers manipulated the function of Gli3, a gene that is known to be important in regulating the pattern of limb development. Mice with excess GLi3 repressor activity reverted to preaxial limb development — just like salamanders. Conversely, when Gli3 was “knocked out” in salamanders, they developed limbs postaxially, like the mice and all other tetrapods.

“In evolutionary terms, what we’d basically done in mice is bring back the ancestral form of limb development by gene manipulation, proving that Gli3 was key for the shift from preaxial development seen in early tetrapods,” said Voss.

In the future, findings from this work will also help answer questions about limb regeneration, Voss says. Salamanders are one of the few four-legged animals that can fully regenerate a limb after losing it and scientists have proposed the capability is linked to their retained preaxial development. 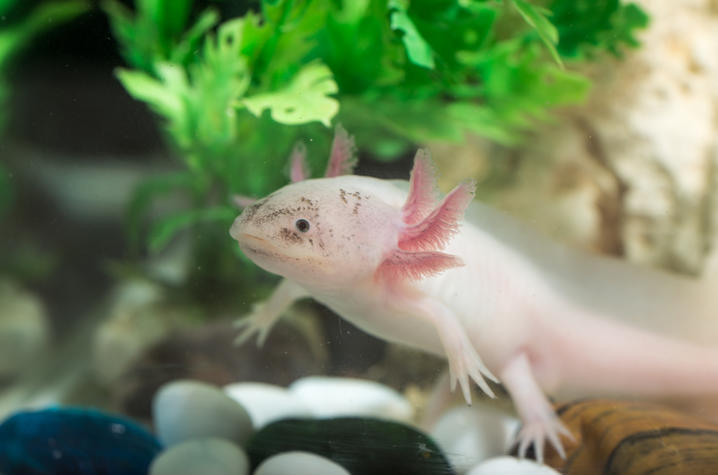 The UK study, which focuses on axolotl salamanders, gives insight into the evolution of limb development. Argument, iStock/Getty Images Plus.