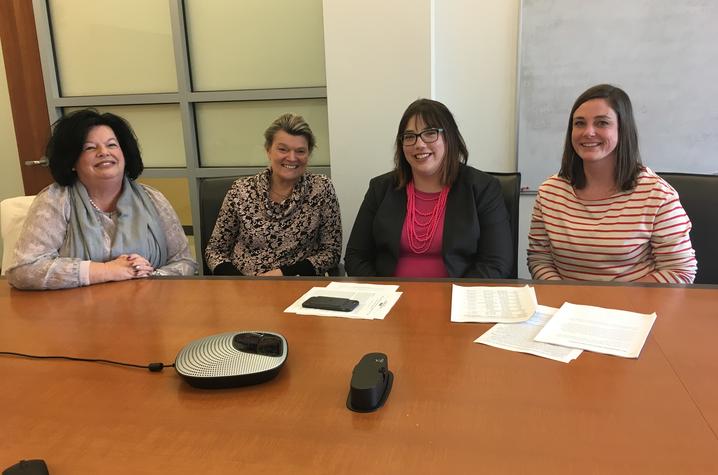 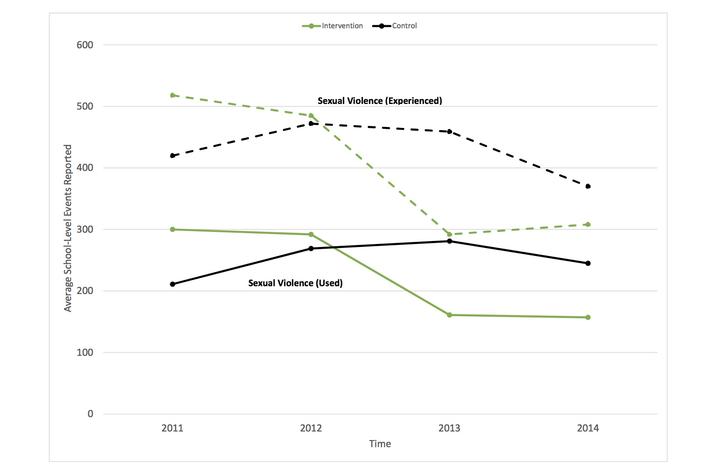 LEXINGTON, Ky. (March 10, 2017) — University of Kentucky researchers have observed a significant reduction in sexual violence perpetration and victimization among Kentucky high school students, according to a recently published study on the “Green Dot” bystander intervention program..

Led by Ann Coker and Heather Bush in UK’s Center for Research on Violence Against Women (CRVAW), the study is the largest and longest randomized controlled trial of bystander intervention programs focusing on sexual violence prevention in high schools. Published this week in the American Journal of Preventive Medicine, the study reveals the implementation of Green Dot in Kentucky high schools decreased not only sexual violence perpetration, but related forms of violence including sexual harassment, stalking and dating violence.

“This research is great news for parents, schools, young adults and adolescents across Kentucky and the USA,” said Coker, who is the Verizon Wireless Endowed Chair in CRVAW and professor in the UK College of Medicine. “We found that sexual violence can be prevented — this violence is not inevitable. Adolescents and young adults can learn how to identify risky situations and safely intervene to prevent violence.”

Sexual violence continues to be a serious problem for Kentucky teens. One in seven high school students in Kentucky experience physical dating violence, and one in 11 have had unwanted sex because they were physically forced, or too intoxicated to give consent. Bystander training programs like Green Dot teach individuals how to recognize situations or behaviors that may become violent, and intervene to reduce the likelihood of violence.

Funded by the Centers for Disease Control and Prevention (CDC), the study followed 26 Kentucky high schools over the past five years. Half of the schools were assigned to receive the Green Dot intervention, with the others serving as the study's control group. Interventions were conducted by trained rape crisis educators. The Kentucky Association of Sexual Assault Programs (KASAP) served as a community partner in the trial and covered the cost of Green Dot training for at least one staff at each regional center across Kentucky. By utilizing these existing resources, the schools encountered no additional costs to implement the program.

“The total cost of the program, over the study period for all intervention schools, was $1.55 million, which was largely personnel costs,” said Heather Bush, Kate Spade & Co. Foundation Endowed Professor in CRVAW and associate professor of biostatistics in the UK College of Public Health. “Because KASAP educators were ideally positioned to add prevention education to their therapeutic skill set, schools did not incur any additional costs to implement Green Dot. Given the partnership with KASAP, we estimate the cost of providing Green Dot to new schools at $25,000 per school.”

The interventions were implemented in two phases. In Phase 1, rape crisis educators delivered Green Dot speeches to all students in the intervention schools. In Phase 2, educators implemented intensive bystander training. This training was conducted in smaller groups by high school students perceived as leaders by their peers (about 12-15 percent of the student body). Because Green Dot involves intensive training for a small number of students, ongoing costs were relatively low and were less impacted by school size, according to Joshua Bush, leading author of the cost analysis study and visiting professor of accounting at Eastern Kentucky University.

“When you have a larger initial investment but low cost of student participation, sharing the investment across multiple schools is particularly cost-effective,” Joshua Bush said. “The KASAP partnership provided the relationships and personnel for such a statewide implementation. School administrators can benefit from this strategic partnership because violence prevention training is not required in secondary schools, and is not part of a typical budget.”

A total of 89,707 surveys were completed over the five-year period and researchers compared survey-reported data before program implementation with rates from 2010-2014. Regarding sexual violence victimization, rates were 12 to 13 percent lower in the intervention versus control schools in years three and four, respectively. This translates to 120 fewer sexually violent events in year three, and 88 fewer in year four, indicating that sufficient time is required to see the ultimate effect of the training on violent behaviors.

“In this study we sought to change the culture that supports violence in high schools, and making these changes requires time,” said Coker. “Fortunately, we had five years to implement and evaluate these changes and we definitely needed all five years. We saw reductions in violence acceptance and increases in bystander actions in the second and third years of the study, but we did not see significant and consistent reductions in sexual violence and other forms of violence until the fourth and fifth years of the study when Green Dot training was fully implemented.”

Green Dot, designed by former UK faculty member Dorothy Edwards, has been in use at the university since 2008. It teaches students how to identify situations that could lead to an act of violence (represented on incident maps by a red dot) and shows them how to intervene safely and effectively. A “green dot” represents “any behavior‚ choice‚ word or attitude that promotes safety for all our citizens and communicates utter intolerance for violence.”

“The State Prevention Team, convened by KASAP, selected the Green Dot program for this trial because the program engages all students across the school quickly with motivational presentations,” said Eileen Recktenwald, executive director of KASAP. “The second training phase targets the natural leaders or trendsetters amongst the students. Their behaviors (engaged bystander actions to reduce violence risk) will be noticed and emulated by other students. Training this small yet influential group results in an efficient use of training resources and extends the intervention reach across a school or community.”

“As educators, we have an obligation to provide our students with a safe place to live and learn,” Capilouto said. “The Green Dot program was ahead of the curve when it was established at the University of Kentucky. Today, it is an effective bystander intervention training tool on college campuses across the country, and the results of the Center for Research on Violence Against Women’s study illustrates its effectiveness in high schools. Providing this important training earlier supports all our efforts to make high schools and college campuses safer for all people.”

Farm Road to Temporarily Close to Thru Traffic Jan. 25-28