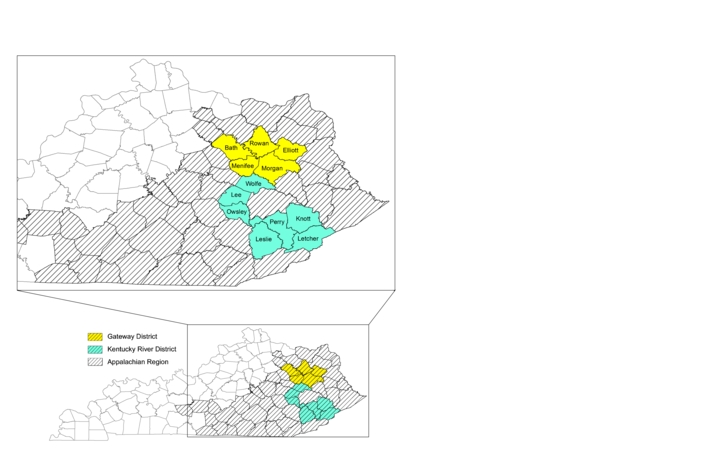 Map with color coding to identify 12 counties in Kentucky which will be the site for the research project.

LEXINGTON, Ky. (Aug. 28, 2017) – With a $1.16 million cooperative agreement from the Centers for Disease Control and Prevention, National Institute on Drug Abuse, Substance Abuse and Mental Health Services Administration and the Appalachian Regional Commission, April Young, researcher with the University of Kentucky College of Public Health and Center on Drug and Alcohol Research, along with a co-principal investigator at Emory University, will partner with communities to conduct research to address the opioid epidemic in 12 Eastern Kentucky counties.

From the start, researchers knew that success of the project would rely on the involvement of the communities where the research will take place. From the time Young and her co-principal investigator began to draft the proposal they sought support from organizations who operate in the region, and leaders like U.S. Rep. Hal Rogers, who drafted a letter of support for the grant application.

“The more we learn about drug abuse and addiction, the more we can thoughtfully and strategically intervene to save lives and change the trajectory for families across Eastern Kentucky,” said Rogers, co-founding co-chair of the Congressional Caucus on Prescription Drug Abuse. “I applaud the University of Kentucky for utilizing its powerful research resources to pinpoint the challenges we face in combatting opioid abuse, in an effort to implement effective, lifesaving programs that can be sustained in our communities for generations to come.”

The project, titled Kentucky Communities and Researchers Engaging to Halt the Opioid Epidemic (CARE2HOPE), includes both epidemiological and qualitative research which will be conducted by Young, her colleagues in the UK Center on Drug and Alcohol Research, Emory University and other partnering institutions. The first two years of the five-year project will focus on better understanding opioid use and its context in the 12-county area. The team will, through interviews and surveys with the community, collect information on resources and factors that impact access to treatment for opioid use disorder as well as risks for related harms such as overdose, hepatitis C (HCV) and HIV.

This step is vital to developing intervention, as those who live in these communities are the best source for identifying resources and factors that impede access to treatment and contribute to risk. During the first two years, the team will also work with communities to identify evidence-based community response projects that meet their needs.

The final three years of funding, which is estimated to total approximately $3.25 million, are contingent on meeting milestones in the first two years. During the three-year intervention phase, the team will work with the community to implement and evaluate the evidence-based community response projects.

Sustainability is at the forefront of the team's, and the funding sources', minds. The primary goal being for communities to be given the tools to continue programs that are implemented long after the research has been completed. After completing their data collection, the team will work with communities to identify and apply for, additional funding to maintain programming.

A key aspect, and strength, of this initiative is the collaboration with other institutions, including the Harm Reduction Coalition, Kentucky Department for Public Health and other state departments and agencies, Boston University, RTI, the Gateway and Kentucky River District Health Departments, AIDS Volunteers, Inc. (AVOL) and other community leaders and organizations.

"It benefits these communities to have experts from across the country working to address the opioid epidemic," said Young.

Hannah Cooper, associate professor in the Rollins School of Public Health at Emory University and co-principal investigator, is familiar with Kentucky, having worked with Young on another project focused in and around Morehead, Kentucky. That project was her first opportunity to visit Eastern Kentucky.

"On my first trip to the Gateway district, I was struck by both the devastating consequences of the local opioid epidemic, and by the local community's fierce commitment to stopping it," Cooper said. She sees the benefit in cross-country collaboration. "Whenever two institutions collaborate, you end up with a proposal that is stronger than it would have been with just a single institution,' she said. "In this case, the University of Kentucky is renowned for its innovative and rigorous research on rural opioid epidemics, networks and hepatitis C. By interweaving this expertise with Emory's strengths in community-based participatory action research and community trials, we created a remarkably strong proposal."

The UK team members for this project include Sharon Walsh, Jennifer Havens, Carrie Oser, Michele Staton and Michelle Lofwall, all faculty associates in the UK Center on Drug and Alcohol Research, who have over 40 years of combined experience in research on rural drug use, including in substance use disorder treatment, HCV and HIV risk reduction and intervention in criminal justice settings. UK team members were among the first to document the rise in opioid injection in Appalachia and have a history of highly productive collaborations with federal, state and local stakeholders in Appalachian Kentucky communities.

For more information about the CARE2HOPE Project, visit the project website at www.care2hope.org. If you are a community member and would like to learn about opportunities to get involved, contact the project staff by email at care2hope@gmail.com.