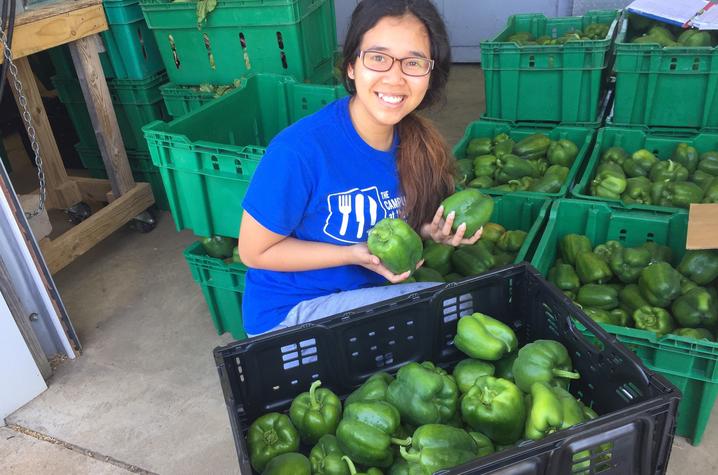 LEXINGTON, Ky. (March 21, 2017) — Food waste and food insecurity are challenges in Kentucky and throughout the United States. A research project conducted by a University of Kentucky undergraduate student shows that a student-led UK program is succeeding in efforts to reduce the rate of both.

Kendra Oo, a UK senior from Myanmar, studied the effectiveness of the summer gleaning program of the Campus Kitchen at the University of Kentucky, a program in the UK College of Agriculture, Food and Environment. It is part of the national Campus Kitchens Project.

In partnership with GleanKy, UK students gather leftover produce from a variety of sources. They use the produce to prepare meals for food insecure groups around Lexington.

From May to August 2016, Oo found that UK students gleaned 1,755 pounds of produce from UK’s Horticulture Research Farm, The Arboretum, the Lexington Farmers Market and Lucky’s Market. This amount came in the form of 57 different types of fruits and vegetables. Based on U.S. Department of Agriculture food analysis reports, Oo found, as a whole, the gleaned produce was nutritious, providing an excellent source of vitamins and phytonutrients to the group’s clients.

She conducted her research with support from her mentors Tammy Stephenson, UK assistant professor, and Amanda Hege, director of community outreach for the Department of Dietetics and Human Nutrition.

Some of the food went to Building Blocks for Healthy Kids Program, a summer program for food insecure children in Lexington. Oo made weekly visits to Building Blocks for six weeks. Each time she met with the children, she asked them to participate in an educational activity and nutrition lesson aimed to help participants make healthier food choices. In addition, the children were offered a snack made from some of the gleaned produce at each meeting. After the children ate their snack, Oo conducted a plate waste study to determine how much of the food the children actually ate. She found the participants ate more than half of their snacks each week. Stephenson said this finding is important because the fruits and vegetables the students ate, including kale, spinach and beets, are not regularly consumed by children.

The project was particularly important to Oo, who discovered her passion for fighting hunger while attending a Campus Kitchen Boot Camp in Washington, D.C, in August 2014. After the camp, she helped lead efforts to start UK’s Campus Kitchen and served as its development chair from 2014 to 2016. Three years later, UK’s Campus Kitchen has recovered more than 11,000 pounds of food, served more than 7,100 meals and engaged 2,500 volunteers in more than 10,000 service hours.

“My journey with the Campus Kitchen at the University of Kentucky has allowed me to hold responsibilities such as planning events, leading volunteers, writing grant applications, raising funds and much more,” said Oo, an intern with UK’s coordinated program in the Department of Dietetics and Human Nutrition. “I served as a co-author in writing various grant applications and helped the program receive $10,150 in funding. I also applied for the Summer Sustainability and Creativity Fellowship grant from the UK Office of Undergraduate Research and received the grant to start my project.”

“Over the past four years, Kendra has shown great initiative, drive and passion in the fight against hunger,” Stephenson said. “Her undergraduate research project provided solid evidence for the value of UK’s Campus Kitchen summer gleaning program and the need for continued summer programming using gleaned produce.”

Oo presented her research findings during Posters at the Capitol in Frankfort and will present them again at the Universities Fighting World Hunger Summit and at the Campus Kitchens Project Summit Squared, both held at Walsh University in Ohio in late March.

Oo's grant for the project was administered by the Office of Undergraduate Research and funded by the Student Sustainability Council.

“While improvements can certainly be made, the summer program effectively reduced food waste through gleaning and promoted consumption of locally grown fruits and vegetables in a food insecure population,” Oo said. “Results indicate that food recovery initiatives that are student-driven, such as the Campus Kitchens Project, can be a good way for land-grant universities to effectively fight hunger and empower students to be leaders and innovators in solving hunger, reducing food waste and contributing to a sustainable community.”