LEXINGTON, Ky. (Aug. 26, 2021) — John Schmidt — not unlike most children — grew up playing with Legos. He vividly remembers the sense of accomplishment that accompanied following the step-by-step instructions, manipulating the various pieces and constructing imaginary worlds.

But little did he know, his favorite childhood pastime would inspire his future career path. “I enjoy problem-solving, so that’s why I chose to pursue a degree in mechanical engineering.”

Fast forward, Schmidt is now a graduate research assistant in the Department of Mechanical Engineering in the College of Engineering at the University of Kentucky. He is no longer building Legos, but he is still putting those problem-solving skills to the test.

Most recently, Schmidt — a recent graduate from UK’s Paducah Campus — has been an integral part of a team of student and faculty researchers who constructed three capsules that are currently on their way to the International Space Station (ISS).

The venture can trace its origin back years ago to an undergraduate design project.

“We had a visitor from NASA — she came to campus and was talking about the idea of building a smaller capsule to travel to the ISS, and that really got students excited,” Alexandre Martin, professor of mechanical engineering, said. “So, they started developing this capsule, and the project just kept growing and growing.”

Then, the project became even more interesting — receiving funding from NASA EPSCoR. Instead of building prototypes, Martin and his team began developing capsules that would actually travel to space.

The team is focusing on building better thermal protection systems. These systems protect a payload — whether astronauts, equipment or scientific instruments — during the harsh flight of a space capsule into the atmosphere of a distant planet or on its return to Earth.

“The capsules are sent to the ISS on a resupply mission, and they remain on board for several weeks until that resupply mission is over. Then, our capsules are placed inside the resupply vehicle, which then undocks from the ISS,” Martin explained. “Eventually, that spacecraft is deorbited. The purpose of that is to burn up that vessel which is full of trash from the ISS.”

Everything from the vehicle will disintegrate on entry, but the capsules will survive — that’s what they were designed to do.

“At that point, they'll re-enter the atmosphere, collect the data and transmit it to us. The main goal is to gather temperature measurements from the capsule,” Schmidt said. “We want those temperature measurements, because that will tell us how well the heat shield is performing as it re-enters the atmosphere. This will help us design new heat shields. Additionally, it helps computer simulation people to compare actual experimental data to their simulations.”

The goal is to advance the analysis and design of NASA entry systems by developing a fully integrated, interdisciplinary simulation capability, which is critical to future exploration of nearby planets that require safe placement of large payloads on their surfaces.

“All three heat shields were provided by NASA. And the goal here is really to be able to measure the thermal performance of these heat shields. So that links back the research we're doing, of course, which is modeling heat shields,” Martin said.

Together, Martin and his team are developing game-changing capabilities through the use of high-fidelity, validated physics models.

The project will also allow UK to contribute to forming the next generation of aerospace engineers at NASA.

“This has greatly expanded my knowledge of engineering, and it’s really exciting to work for NASA and be involved with NASA projects,” Schmidt said. “I also really enjoy the hands-on aspect of this particular project. I get to build these capsules, I get to test them and I get to use basic mechanical engineering problem-solving. It’s hard work, but the hard work pays off — it’s truly fulfilling work.”

This story is part of our new Wildcat Wednesday Series: 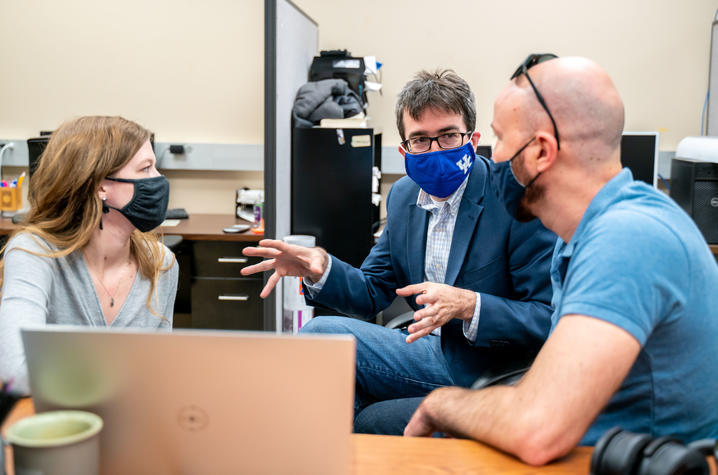