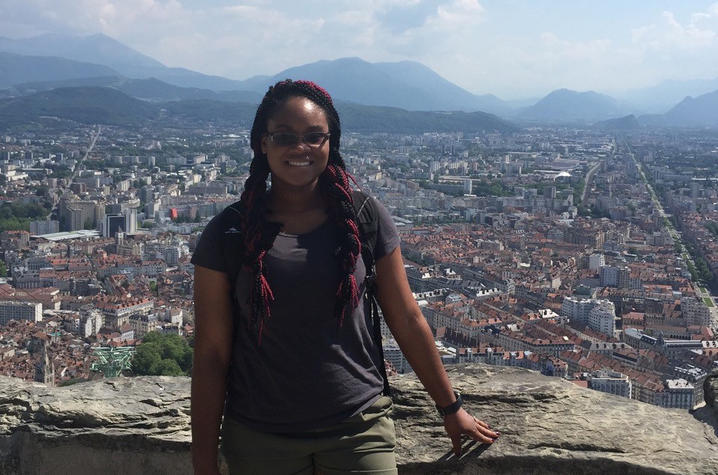 LEXINGTON, Ky. (July 12, 2017) — Sarah Hodges had never stepped foot into a research laboratory until she began her educational career at the University of Kentucky. A native of Knoxville, Tennessee, Hodges enrolled at UK in the fall of 2015 to pursue a degree in chemical engineering.

Once at UK, Hodges took part in the Broadening Participation in Engineering (BPE) program, a National Science Foundation (NSF)-funded program led by Eduardo Santillan-Jimenez from the UK Center for Applied Energy Research (CAER).

Hodges became interested in some of the research taking place in CAER’s Materials Technologies Group and was paired with mentor Tristana Duvallet. She embarked on a research project with that group during the summer of 2016, and she received a competitive award for the project by UK’s Office of Undergraduate Research.

That BPE program, Hodges said, changed her educational pathway, swinging open wide a world of opportunity that has led her to France this summer to pursue her burgeoning research career.

In 2016, Santillan-Jimenez encouraged Hodges to apply for the Kentucky-West Virginia Louis Stokes Alliance for Minority Participation (KY-WV LSAMP) program. Participation in the KY-WV LSAMP program led her to being nominated for an International Research Experience for Undergraduates. This award will allow Hodges to study alongside Professors Gerard Mortha and Capucine Dupont at the University of Grenoble in France this summer to perform research on the thermal degradation of cellulose, which is of interest to applications related to the production of energy, fuels and chemicals from lignocellulosic biomass.

As part of the program, Hodges will also attend ELITECAT 2017, a summer school of catalysis held in Lyon, France, which is home to one of the most prestigious centers for catalysis studies in Europe and the world.

“The opportunities that have been made available to me through undergraduate research here at UK CAER have been life-changing,” Hodges said. “Traveling to France and learning the French culture through research is something I could never have dreamed of. I thank everyone at UK and CAER who have helped me along the way.”