LEXINGTON, Ky. (Oct. 28, 2015) — Hannah Latta, a University of Kentucky junior from Mayfield, Kentucky, is a Chellgren Fellow, Gaines Fellow and member of the UK Honors Program. A biology major planning to attend medical school, Latta has a lot going on. But she is able to do it all and still be graduated in four years, in May 2017, thanks to planning ahead and the perfect course load each semester.

For Latta, graduating in four years has been an important goal since arriving at UK.

"I didn't want to graduate early, like two or three years, because I really wanted that full undergraduate experience," she said. "I wanted to have time to make connections with professors and do undergraduate research, and I also wanted to graduate in four years as opposed to five or six because I do plan to attend medical school, and I wanted to finish in a reasonable amount of time."

A new campaign called 15 to Finish is encouraging college students across the Commonwealth to do what Latta is doing, complete requirements for graduation in four years, by taking 15 credits a semester, which amounts to 120 credits, the required number of credits for most bachelor's degrees.

"Seventy-five percent of first-time, full-time freshman students in Kentucky are automatically being enrolled in 12 credit hours and that means that by the time they're a sophomore, they're already off track to graduate in four years," said Larissa McClaughlin, a project manager in the Division of Undergraduate Education at UK.

Graduating in four years allows Latta and other students to begin the next stage of their lives right on time. But it also saves them a lot of money. Students who take 15 credit hours each semester, instead of 12, the minimum full-time course load, are much more likely to complete their degree after eight semesters instead of 10, saving them a full year of tuition, room and board.

Taking 15 hours a semester and graduating in four years means less debt and more opportunity. It means not having to trade a KEES scholarship (which is only offered for eight semesters) for a loan.

"There's an opportunity cost; if you finish in five years or six years, that's a year or two year that you're not in the workforce and earning money full-time," said Ben Withers, associate provost for undergraduate education at UK. "It delays your opportunity to find that job and to experience the benefits thereof. But it also costs you because you have to pay those extra years of tuition and housing and the other things that are associated with attending a university."

But students aren't the only ones who will benefit. More students finishing in four years can benefit the entire Commonwealth, offering a highly qualified workforce to attract new employers to the state.

"And national studies show that people who hold an undergraduate degree are more involved citizens than those who do not," Withers said. "They generally tend to vote more, they tend to be more involved in civic matters, they tend to volunteer more. So there's all kinds of benefits for the students, for the families, and the Commonwealth."

Like Withers, Latta believes college graduates are going to "shape the economy of our future" and the sooner they get into the workforce, the more impact they will have on Kentucky.

It isn't always an easy choice, though. Jobs, difficult courses and extracurriculars may tempt students to take only 12 hours, but McLaughlin often reminds them to weigh the costs and benefits. After all, students can take 15 hours (or more) for the same price of 12 hours.

For those students who have taken less than 15 hours per semester and want to catch up, it may not be too late. Summer and winter intersessions offer an array of courses ranging from one to three credit hours, and simply talking with an advisor could allow a student to plan out their entire undergraduate career.

"Most colleges have a plan that allows students to get out in four years and your advisor can definitely guide you to navigating that and making sure you're taking the right courses in the right sequence that complement each other in the best way…" McLaughlin said.

Thanks to strategic planning with her advisors, biology junior Latta is taking courses that count toward both her honors curriculum and her major, allowing her to participate in the UK Honors Program without doubling up on her course load and putting her right on track to graduate in four years.

Latta plans to pursue medical school and pediatric oncology, so a four-year plan from the beginning has been almost necessary. But "even if you're not planning to pursue post-secondary degrees, it helps you to have a handle and you are in charge of your education no matter what happens."

For more information on how to build a foundation for success at UK, students can talk to their advisors or take a look at The Blueprint: http://issuu.com/studentsuccess/docs/blueprint-medium_b-final_1_. 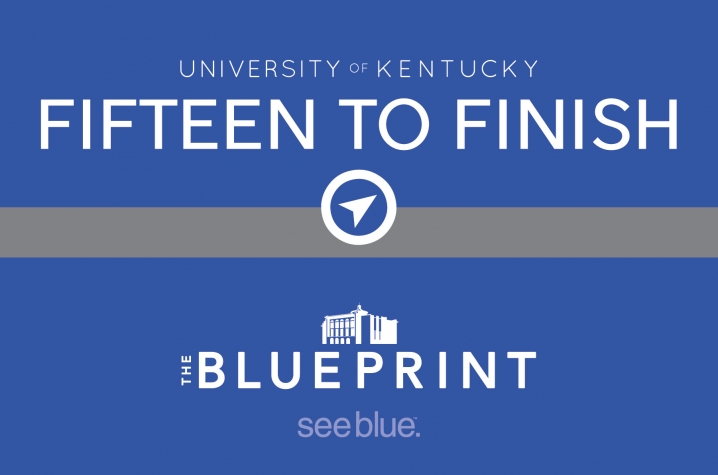