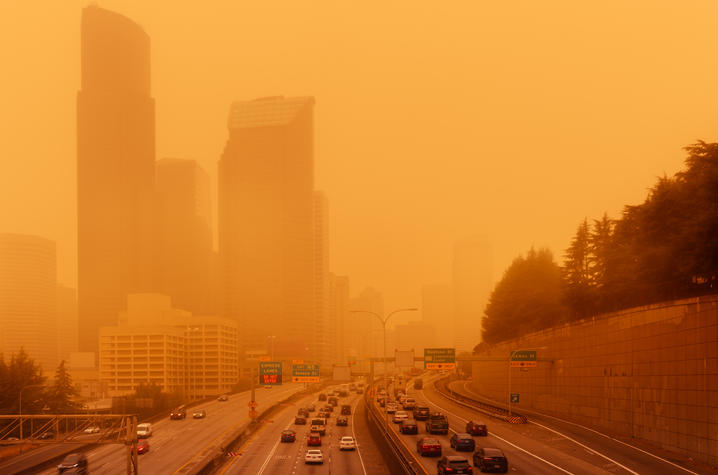 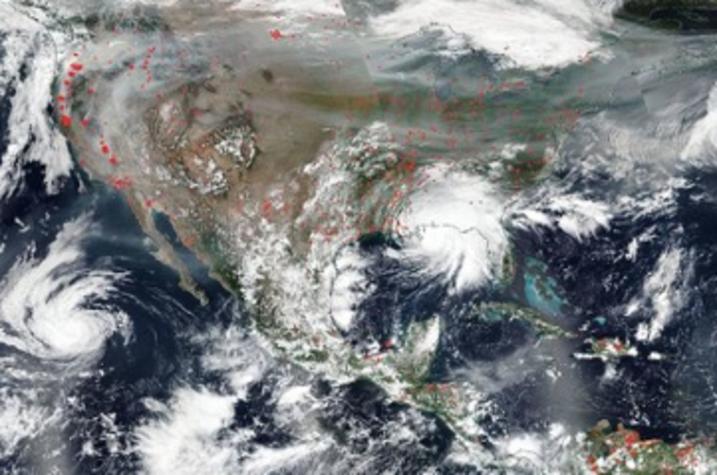 LEXINGTON, Ky. (Oct. 15, 2020) — Researchers in the University of Kentucky Department of Chemistry are studying how smoke from wildfires can affect public health — even hundreds of miles away from the source.

Associate professor Marcelo Guzman, along with graduate student Sohel Rana, say that molecules released from forest fires can become more water soluble, and likely toxic, over the two weeks that smoke is transported through the atmosphere. In addition to warming the atmosphere, these molecules can cause a host of respiratory issues in humans when inhaled.

“As the biomass in trees, bushes, grass and peat are burned, large quantities of smoke, soot and other pollutants are emitted to the atmosphere,” Guzman said. “The smoke can then rise several kilometers in altitude and spread across large continental regions, polluting the air of distant areas. For example, many residents in the states of California, Washington and Oregon have recently experienced the poor air quality of hazy smoke.”

Every year, thousands of hectares of land are engulfed by forest fires across the globe. So far in 2020, more than 2.6 million hectares in the western United States have been consumed by fires.

This ongoing UK project, sponsored by the National Science Foundation, is examining how emissions from wildfires change with time in the atmosphere to create new chemicals that impact the health of societies and the Earth’s climate. In the lab, Guzman and Rana are studying the heterogeneous atmospheric chemistry of methoxyphenols, which are among the most abundant molecules emitted during biomass burning. The team highlighted that when methoxyphenols react at interfaces, such as on the surface of cloud and fog waters, as well as aerosol particles from pollution, electron and proton transfer processes are favored to quickly convert aromatic molecules into highly water-soluble products.

“When you look at the mechanisms that these methoxyphenols and phenolic aldehydes undergo when exposed to background ozone gas and hydroxyl free radicals during atmospheric transport, you can start explaining the common observation of multifunctional carboxylic acids as abundant species in a lot of particles in the air we breathe,” Guzman said. “The report identifies unique reaction channels that can be used to distinguish the contribution of atmospheric processing of biomass burning emissions over other possible sources of multifunctional carboxylic acids. The work is not only fundamentally interesting, but identifies specific signatures for the daytime transformation of methoxyphenols emitted from forest fires as they age in the atmosphere.”

To do this, the researchers use a special instrument in the lab that replicates the fast reaction between the methoxyphenols markers of biomass burning and ozone gas at the interface of air with micrometer-size water droplets. They then vary the concentrations and acidity in the experiments to see how the interfacial chemistry changes for different conditions occurring in the environment.

“We are trying to understand the dominant transformations of the methoxyphenols from smoke in the atmosphere, determine their lifetime and establish how they chemically evolve at interfaces,” Guzman said. “We want to contribute new understanding of their impacts on human health and climate. Are the aged molecules more toxic? How do the structural changes of the molecules contribute to create particles that interact with sunlight affecting climate?”

Guzman and Rana found that while in the air, the methoxyphenols in smoke react with ozone and hydroxyl radicals to become oxidized and highly reactive. A person breathing in these reactive compounds can suffer oxidative damage of cells, especially in the respiratory track and lungs. In addition, these reactive compounds can make some people more prone to other health problems.

Guzman also said that characterizing the chemical processing of pollution from wildfires and domestic woodburning can help to determine if so-called “brown carbon” in soot emitted from fires contributes to absorb more heat from the sun or not.

“While the many small molecules in brown carbon can be quickly photobleached by the sun, the larger molecules are far more resistant, possibly contributing to the heating effect in the atmosphere,” Guzman said.

Find out more about the research "Oxidation of Phenolic Aldehydes by Ozone and Hydroxyl Radicals at the Air–Water Interface" in the Journal of Physical Chemistry at DOI: 10.1021/acs.jpca.0c05944.

Also, read more about the project at https://uknow.uky.edu/research/chemistrys-guzman-study-atmospheric-reactions-pollution.