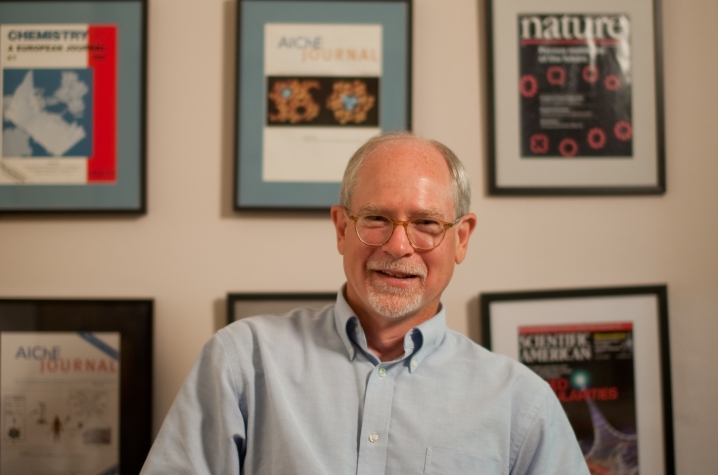 For a transcript of this video please click on the link at the bottom of the story.

As a scholarship track athlete at the University of Kentucky in the 1970s, Mark Davis competed against some of the best athletes in the world.

Some 40 years later, Davis, the pioneer known for his work in nanomedicine and chemical synthesis and Schlinger Professor of Chemical Engineering at the California Institute of Technology, is competing to save lives through better cancer treatments that have proven to be ground-breaking in the field. This month, in fact, Davis -- who has a bachelor's degree, master's degree and doctorate in chemical engineering from UK -- was named one of 65 new members of the Institute of Medicine, one of the highest honors in the fields of health and medicine.

For Davis, his quest as a scientist began as a track and field athlete at UK.

"The Southeastern Conference was spectacular then as it is now in track and field," Davis recalls from his office, where he is an endowed professor of chemical engineering at Cal Tech, one of the top research institutions in the world. "Division 1(athletics) is very demanding … we would have practices seven days a week, we had all kinds of commitments that we had to do … the commitment was extremely high, and so if you want to do D1 athletics, you have to organized if you want to get all your classes and do athletics … it's pretty tough."

After completing his studies, Davis went to Virginia Tech and later Cal Tech as a professor, where he became a nationally renowned scholar in the use of chemical engineering concepts to answer important fundamental questions in the physical and life sciences.

But those complicated and at times abstract concepts in the engineering laboratory took on new meaning and importance when his wife was diagnosed with breast cancer at the age of 35.

Davis said she struggled terribly with the effects of intensive treatments, designed to kill her cancer. But the question, at times, became whether the cure was worse than the cancer.

"There were several times when she had near death experiences not from the cancer but from the treatments for the cancer," Davis says. "As we were going through this experience, she basically said, 'This is really terrible. There has to be better ways to try to attack cancer … Why don't you start working on this?

And, of course, I said that I didn't know anything about it. If you know my wife, the next response was typical for her: "Well, what kind of excuse is that? You guys at Caltech have solved big problems … and this is a big problem, so why not start working on it."

Fortunately, Davis' wife is still alive today, but her emotional questioning of her husband during a time of terrible challenge led him on a professional quest that has continued for the last 15 years -- finding ways to better deliver the drugs and treatments for cancers.

Davis says his experience at UK -- both as an athlete and a scholar -- was rewarding and important because of the social and intellectual interactions he was able to have as a young man from Pennsylvania.

For more about Mark Davis' accomplishments on the track click here and read about his victory in the 400-meter dash. He recently became the fastest 55-year-old man in the world.