LEXINGTON, Ky. (March 4, 2019) — Did you know, suicide is the 10th-leading cause of death in the United States? In fact, 47,000 Americans die by suicide every year. Julie Cerel knows the numbers by heart, because she has dedicated her life's work to decreasing them.

Cerel has many titles to accompany her expertise. She is a licensed psychologist, professor in the College of Social Work and president of the American Association of Suicidology.

As a suicidologist, Cerel understands — when someone dies by suicide, loved ones are left grasping for answers.

The University of Kentucky is hoping to continue a dialogue about mental health and well-being. In doing so, Cerel is helping to navigate the conversation in a Q&A session.

UKNow: What exactly is the role of a suicidologist?

Cerel: The term was coined by Ed Schneidman, who was the father of modern suicidology. Essentially, he wanted an all-encompassing term to describe the study of suicide, and that would include all of the people involved in suicide prevention, intervention and postvention.

UKNow: Why did you choose this field of study?

Cerel: For my master's thesis, I was working on a study of childhood bereavement for parental death. My advisor suggested I look at the children who are bereaved by suicide. Those 26 kids from 15 families was my master's thesis. It made me realize, this is a topic — suicide bereavement — that is so important and so understudied.

UKNow: Is it true, more people are dying by suicide — do statistics support this?

Cerel: We're definitely seeing an increase in the rate of suicide. The question is, is it a true increase, or are we just getting better at categorizing suicide deaths? And, talking about it has been less stigmatizing than it has been in the past.

UKNow: Is the increase in suicide deaths cause for alarm?

Cerel: I think we haven't paid attention to suicide in the past compared to other diseases that we've been studying. I wouldn't call it a cause for alarm, but I would say, it's a call to action.

UKNow: What are the contributing factors that may lead someone to suicide?

Cerel: There's never a suicide that happens because of one thing. When we think about things that contribute to suicide, we don't have a lot of great data to recognize the factors that are most important. We do know, people who have made suicide attempts are more likely to die by suicide in the future, but most people who attempt suicide never go on to die by suicide.

UKNow: Often, people want to point to bullying or social media, but how big of a role do they play?

Cerel; Social media can play a role, because it's really easy to bully people you can't see or talk to. On the flip side, it's a chance to reach out and seek help. So, the teen who is feeling awful and can't talk to anybody can go in a bathroom stall and text 741-741, which is the crisis text line, and get help right away.

UKNow: Family, friends and educators are looking for advice. Are there warning signs that someone might die by suicide? If so, what are those signs?

Cerel: Everyone really wants to know, what are the warning signs that my child might be at risk. Unfortunately, the state of our understanding isn't far enough ahead to really figure out which warning signs indicate that anyone is at risk for suicide.

UKNow: If you are fearful for a loved one, what is the most effective way to approach this sensitive topic?

Cerel: There's absolutely no evidence that asking directly about suicide will put that thought in someone's head, and a lot of times it's a relief for someone who has struggled with thoughts of suicide. When someone asks them and cares enough to say, I'm worried about you. Sometimes that's really all you need to do.

UKNow: What is the most common misconception about suicide?

Cerel: That suicide is something that is infrequent and only happens to a specific type of person. Forty-seven thousand Americans die by suicide each year. That's more than die by breast cancer. In fact, it's double the number of Americans who die by homicide. Because we haven't talked about suicide for so long, people have really kept it a secret, and they think if it happens to their family or their friends it's something no one else is experiencing.

UKNow: How can we change the conversation surrounding suicide? How do we ultimately lessen the stigma?

Cerel: We can have this conversation, and that realizing when people die by suicide that's not all of who they are. That's only how their life ended, and there were many other things in their life that were wonderful and helped define who they are. 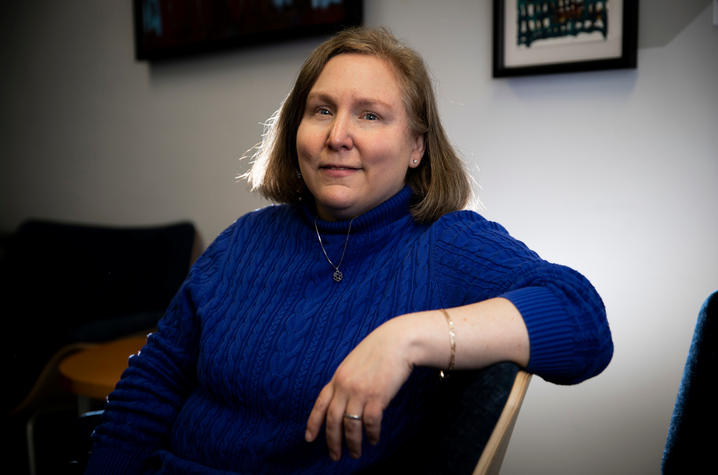 UK is hoping to continue a dialogue about mental health and well-being. In doing so, Julie Cerel is helping to navigate the conversation. Pete Comparoni | UK Photo.