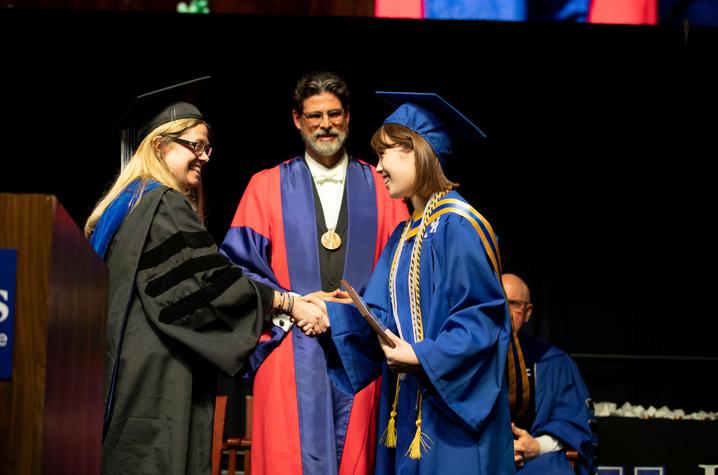 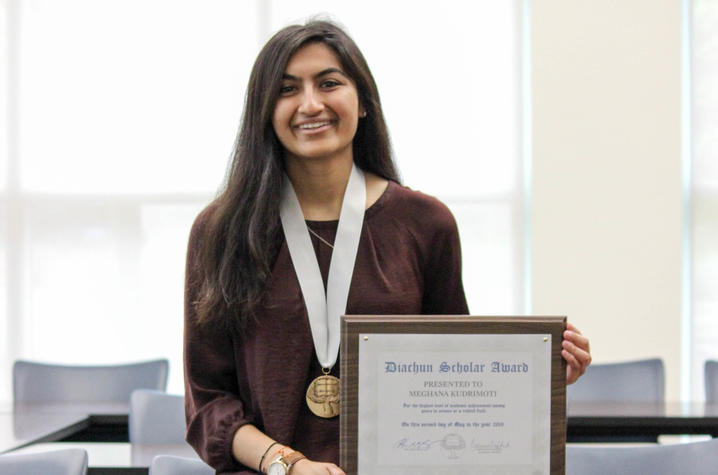 Meghana Kudrimoti, who graduated with degrees in biology and political science in the UK College of Arts and Sciences, was the recipient of the Diachun Scholar Award. This award is given to a graduating senior in a science or related field who has the highest academic achievement among their peers.

While at UK, Kudrimoti was a Gaines Fellow, Chellgren Fellow and director of UK's Big Blue Pantry. She also worked as an undergraduate researcher at UK's Markey Cancer Center and volunteered for the Biology Learning Center, Shoulder-to-Shoulder Global Medical Brigrade in Ecuador and Alternative Service Breaks.

"Meghana, who is making a choice among outstanding medical schools to attend in the fall, will absolutely make her mark not only as a physician, but as someone who will make an outsized positive difference in the world," said Philip Harling, UK history professor, in his recommendation letter. "Meghana has an inquisitive mind, and her curiosity, allied as it is with sharp analytical skills, will serve her exceptionally well in ger graduate career and far beyond."

Rachel Lietzow, who graduated with degrees in foreign language and international economics and international studies in the College of Arts and Sciences, is the recipient of the Evans Scholar Award. This award is given to a graduating senior in the humanities or a related field who has the highest academic achievement among their peers.

Lietzow was a Chellgren Fellow and Patterson Scholar, and tutored on campus, serving as manager of the Chinese tutoring program, and as a math and economics tutor for the Center for Academic Resource and Enrichment (CARES). She served as a UK Education Abroad Peer Ambassador and interned with the U.S. Department of State's East Asian and Pacific Languages Department. Lietzow was also nationally recognized at the Confucius Institute U.S. Center’s 2016 National Honor Gala as one of eight individuals across the nation with a People to People Exchange Award. This was in recognition for creating cross-cultural connections and initiatives between China and the United States.

"(Rachel's) substantive knowledge, language skills and career trajectory make her an ideal fit for the Evans Scholar Award," said Ernest Yanarella, political science professor, in his recommendation. "Among the 10,000+ undergraduates I've had the honor to teach over 49 years of teaching at UK and elsewhere, I consider her in the top 1%."

Each award includes a $2,500 monetary award which can be spent in any way the recipient pleases.

Both awards were made possible by a gift from Jan B. and Karen Kemper Henson, in memory of Lawrence and Rhea Beard Henson. The Hensons live in North Easton, Massachusetts, and are both 1969 graduates of UK. The awards were named in recognition of Stephen N. Diachun, first director of the Honors Program at UK, and Robert O. Evans, his successor.