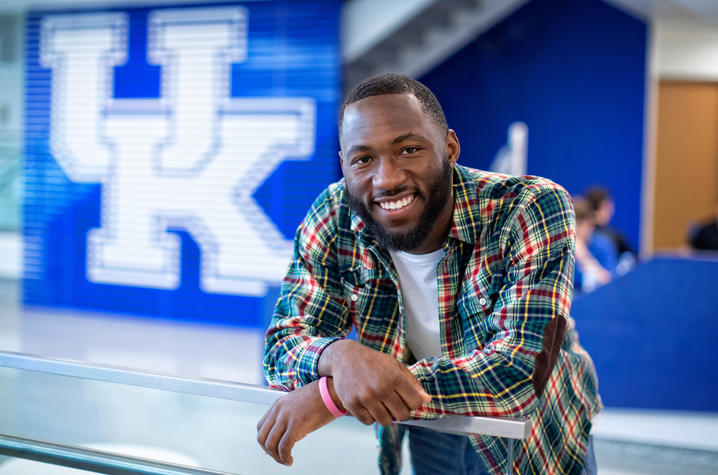 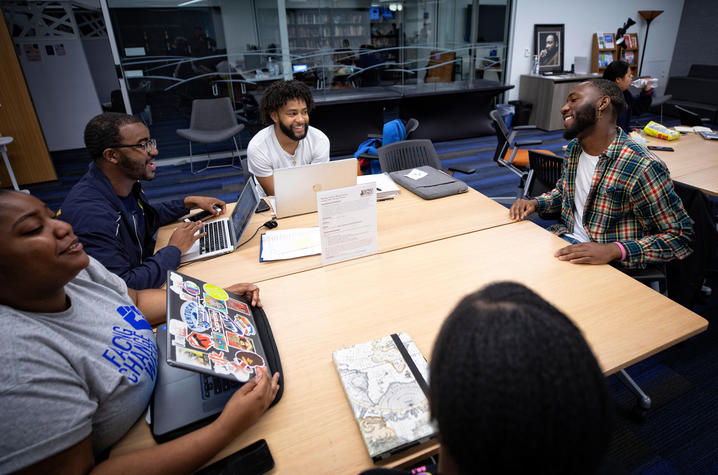 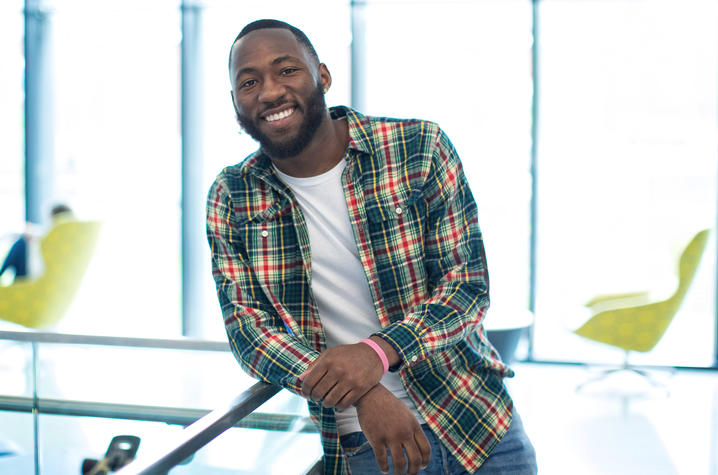 LEXINGTON, Ky. (April 24, 2019) — If you see Eli Caldwell on campus, he is always in a good mood, always smiling as he attends different student organization events, looking to brighten up the day of his fellow students at the University of Kentucky.

As one of the leaders in the Underground Perspective organization, Campus Outreach and a host of other organizations, he also takes on the responsibility of being someone the members can talk to, depend on, go to for advice, or just be a friend in difficult times.

But behind that smile is a story and the journey of a survivor.

Caldwell was born in Nashville, Tennessee, where he grew up with his mom, three brothers and one sister. With drugs and violence around, Caldwell's mother didn’t want her children to grow up in that type of atmosphere. So, she picked up her children and moved. She wanted better for herself and her kids.

Their next home was Louisville, Kentucky, where Caldwell and his family lived with his uncle, but after a while, they were on the move once again.

"That kind of left me and my brothers on the low end of the bargain," Caldwell said. "We had to move in with my cousin Tan, and she still had three of my other cousins living with her already, so we kind of got dropped into there."

In total, Caldwell's cousin took care of eight of her own cousins, by herself. Living all under one roof, Caldwell said that at times it was hard to coexist. What was more evident was the financial issue — even at a young age Caldwell noticed it.

"With her not being very wealthy, we were still at a disadvantage because we were held back financially, and by where we lived."

Caldwell and his family lived in a part of Louisville where he was seeing some of the exact things his mother wanted to avoid in Nashville. His family did as much as they could for him and his siblings, but over time less and less help was being provided.

After a certain point, Caldwell's older cousin could not support her family members any longer.

"As time went on, we found out we were going to have to go into foster care, because most of our family couldn't take us in, especially four rowdy boys, so we literally had one day left."

At 7 years old, Caldwell still tried to bring a smile to his family's face. During this stressful time in his life, he always wanted to keep a good spirit, and bring good energy around them. But reality hits hard, and it became more evident as the days went by that unless things changed, his life would be totally different.

"I didn’t know what to expect, but we don’t have any other option at this point, no one will take care of us."

One day away from being forced into foster care, and possibly being separated from his brothers, a woman enters the picture and changes the entire outcome of Caldwell's life.

"Literally, she came in the house and was like, 'I'm taking y'all to Texas,' so it was an angel if I've ever seen one."

Caldwell's aunt, Tonnea Williams, who he had only heard about but had never met, came to take in her nephews. She and her siblings were in foster care when they were kids, and she didn’t want the same for this next generation.

From the age of 7 to 18, Caldwell made his home in Dallas, Texas. The new environment brought about a new outlook on life. Not having to worry about financial stability, Caldwell was allowed to be a kid. He was able to explore the state of Texas, be a part of different activities, get involved in his community and experience the joys and wonder of life.

Being a kid also meant one thing, playing sports. Sports are huge in the Caldwell family, as he has cousins who have played Division I basketball in college. Basketball was one of his first loves, and also the way he got introduced to UK.

As much as he loved sports, Caldwell excelled in school as well.

He credits his success to his mother, who homeschooled Caldwell at a young age and set the foundation for his success going forward. Caldwell says his mother was one of the most intelligent people he had met, and she instilled a love for learning in him at a young age.

By the end of high school, UK was the school he loved. He applied to other colleges, but always knew in the back of his mind where he wanted to go — his dream school. When the UK acceptance letter came in the mail, Caldwell's dream became a reality. He would be attending the University of Kentucky.

Williams furthered the educational foundation set by Caldwell's mother and showed him how she was able to change her life with it. She also let him know he really didn't have a choice.

"She told me, you're going to college, it really isn't an option."

As Caldwell said, his auntie put it this way, "if you know better, you'll do better."

“Sleeping on a bed, that wasn’t always a luxury; having food every part of the day — lunch, breakfast and dinner — like, I had food.”

The angel who dropped from the sky gave him a new outlook on life. The upbringing he had seen others have, he got to finally experience himself. The structure she gave him made him into the man he is today.

During his time in Texas, Caldwell kept in touch with his mother, but it became less and less over time. Then in March 2013, as a freshman in high school, he received the news no child ever wants to hear. His mother had passed away.

Caldwell was now motivated more than ever to continue to work hard in life, especially in school. Now on this journey without her, he still finds that she has always been his biggest source of motivation, and whenever times are rough, she is where he gains strength to continue his journey.

"I'm just continuing her legacy, I know she would love to see me graduate college more than anything, and I just want to let her know her work didn’t go in vain."

Caldwell is an integrated strategic communication junior at UK. He makes it his mission to be the one in his family to set the standard for change, to set the new precedent going forward.

"I'll be the first one out of my brothers and sisters to get a degree," he said.

Knowing this makes Caldwell work even harder to be a role model.

"I have little brothers, I have a twin brother; I have family that looks up to me, that's older than me, but still look up to me."

The kid who was one day away from foster care, the kid who lost his mother at a young age, the kid who thought this all would be impossible — that kid has now become a young man who is one year away from graduating from college.

As he reflects on his journey, he is grateful for the position he is in, and wants to take full advantage of every opportunity given to him.

As a student who has faced adversity, Caldwell wants all students to know that no situation can hinder you.

"Don’t let your situation explain your life; don’t let that affect the rest of your life. Let that be a stepping stool to be bigger than your situation."