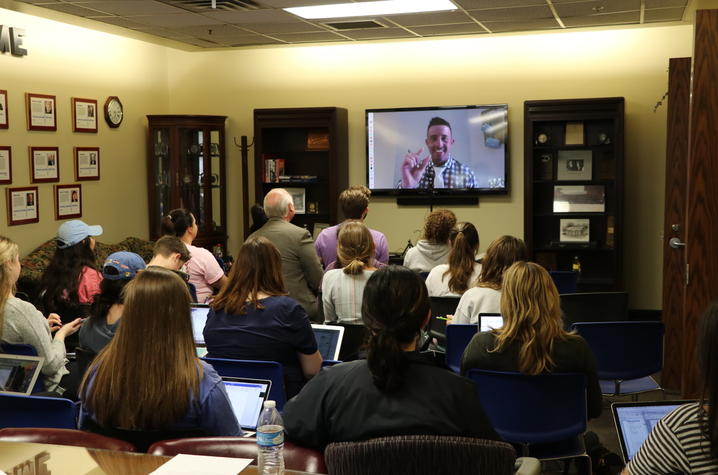 LEXINGTON, Ky. (April 17, 2018) — It is a rare learning opportunity when students get to speak with an industry insider — especially when the insider works for one of the most famous bands on the planet. This was the experience for University of Kentucky College of Communication and Information students in Marc Whitt’s integrated strategic communication (ISC) event planning class when they got the chance to Skype with Beau Loendorf, event coordinator for the Grammy Award-winning rock band Chicago. The band has been performing for over 50 years and was inducted into the Rock & Roll Hall of Fame in 2016.

The video conference took place April 3 during a rare break in Chicago’s hectic tour schedule. It was the result of months of planning by Loendorf and Whitt, who had been exchanging emails and texts since last summer to arrange the meeting. For well over an hour, Loendorf shared career and event planning advice with students and answered individual questions from each audience member. “Before Beau left us, he invited the students to connect with him via social media and to even share their resumes for a personal critique! Now that’s an incredible invitation!” Whitt said.

Each semester, Whitt invites three guest speakers who are professional event planners to address his class, so students can learn from their real-world experience. Having Loendorf talk about his involvement with Chicago and how he coordinates their large-scale events brought a new and exciting perspective to students.

Loendorf added, “As for the students: they were wonderful and asked some great questions that made me think of things I have not thought of for a while. From questions regarding what I enjoy most and least about my job, fan interaction, and even with what I do to stay organized for traveling so much. I was impressed with all the questions they asked.”

Loendorf, who holds a degree in communication studies from Colorado State University, has been planning events for Chicago since October 2016. When he is not traveling with the band on their nearly nonstop tour, he operates Big and Little, an event planning company in Colorado he co-founded.

Some of the advice Loendorf had for students included becoming “super organized” and “stay on top of everything if you wish for everything to run smoothly.” He also stressed that attitude is important and having a positive outlook is key if you want a good outcome in the end.

Whitt, who is also the director of philanthropy communications at UK, has special connections to Chicago. In addition to being a lifelong fan who has seen the band in concert 25 times, Whitt is a member of the national music fraternity Phi Mu Alpha Sinfonia and was involved when the fraternity honored Chicago and its horn section, who are all fraternity members. Thanks to a good friend who was once the band’s tour manager, Whitt and his family have also had the opportunity to meet the band several times and even joined them for dinner.

Whitt was very excited for his students to have this rare opportunity and thankful to Loendorf for generously sharing his time. “The students were able to hear from a professional whose bosses are members of Chicago. When does that ever happen?”