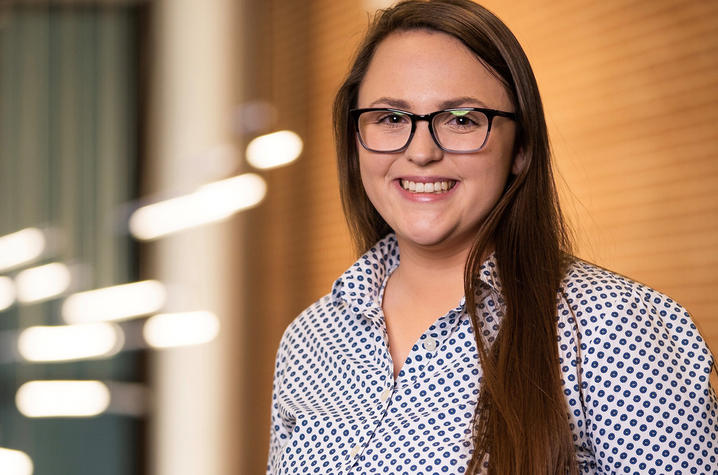 Sydney Sayre is UK's first graduate to major in African American and Africana studies. The program became a major last year. Photo courtesy of UK College of Arts and Sciences.

LEXINGTON, Ky. (May 5, 2020) — Sydney Sayre appreciates the history she’s making in May as she graduates as the University of Kentucky's first African American and Africana Studies (AAAS) major in the College of Arts and Sciences.

“The first black studies course took place at UK in 1969, and in 2020 I’ll be the first person to graduate as a major in African American and Africana studies,” said Sayre, who grew up on a horse farm and considers Lexington her hometown. “I think history is all about new beginnings and change and that is what this program is doing at UK — making history.”

African American and Africana studies was available as a minor until 2019, when it became a major. Sayre, who is double majoring in history as well, accumulated enough credits to be the first student to earn the full major.

“I was delighted to find out that, even though Sydney was already a senior when the major came online, she was able to switch to the major,” said Anastasia Curwood, director of AAAS and associate professor of history. “She is dedicated to the field and has worked hard to complete the major in time for graduation.”

Growing up in Kentucky, Sayre said her parents took her to many places of historical interest, particularly Philadelphia, Boston and Washington, D.C. Sayre then studied history in an AP class at Bourbon County High School. Once she started at UK, however, she found that the story of African Americans in the United States ran much deeper than survey courses could portray.

“My earlier classes never really touched on painful subjects; they were something they always glossed over,” she said. “But when I came to UK, I found such a different attitude about what history was and what could be done about it now. I took Dr. Curwood’s survey class of African American history from the Civil War to the present day, and I found out so much that I didn’t know. There was a lot more to learn, and it really got me interested.”

Classes taught by Curwood and Vanessa Holden, assistant professor of African American and Africana studies, provided even more incentive for Sayre to pursue this discipline.

“I took a course with Dr. Holden on slave resistance and rebellion that changed the way I thought about American history and what I was interested in researching,” Sayre said. “Although it’s such a painful history to learn, it allows me to recognize its effects in the present day.”

As part of her major, Sayre conducted a capstone research project on how enslaved people migrated along with their slave owners across the Appalachian Mountains and settled in Kentucky in the late 18th century. The people in the forced migration from Virginia helped build some of the earliest infrastructure in the Commonwealth.

“One of the things I was able to do was find out how much enslaved people’s labor went into the horse industry,” she said. “One of the families that (brought enslaved people) from Virginia to Kentucky actually was a family that later on started Keeneland. When I happened to stumble on the documents, it was a real eye-opener.”

Sayre was accepted to the graduate program in the history department at UK. She thanks her parents, Julie and Luis Martinez, for their support.

“The faculty in history and AAAS are very proud of Sydney’s pioneering double major,” Curwood said. “She has a keen sense of historical curiosity and it’s been a pleasure to watch her grow as a scholar. We look forward to the contributions she is sure to make in whatever field she chooses.”