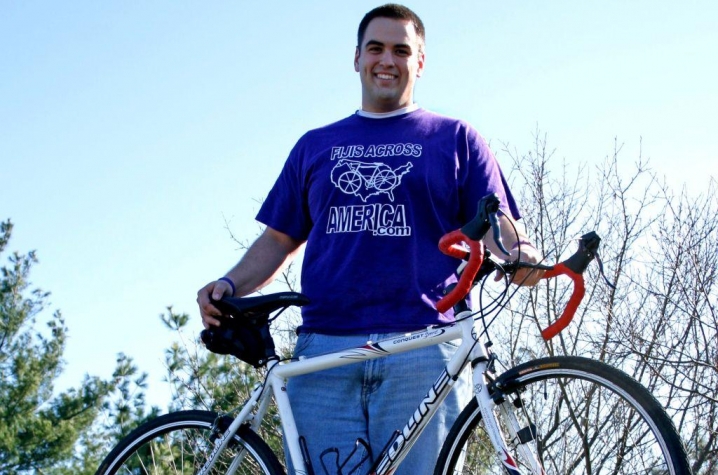 LEXINGTON, Ky. (April 13, 2010) -  Sophomore biology major Cameron Hamilton lives with a sore lower back. And it's not due to long hours over a lab table.

Hamilton is in training. He bikes 20 to 30 miles a day, rain or shine, weight trains at the University of Kentucky's Johnson Center and still manages a full load of classes, along with long lab hours. "I don't have a lot of time," he laughed. "Everything is scheduled pretty back to back."

It all began in July 2009 when Hamilton's best friend, Tyler Jury of Western Kentucky University, approached Hamilton with a plan.

Jury's grandfather had recently passed away from Alzheimer's Disease, and he wanted to do something about it.

"I know that when Tyler says he's going to do something, he'll do it," said Hamilton, who has known Jury since he moved to Elizabethtown in eighth grade. "He told me that he wanted to bike across the country to raise money for Alzheimer's, and I had no doubt that it would happen."

As Jury's dreams became a reality, Hamilton was supportive, but didn’t think that he could ride a bike that far.

But in August, after a 50-mile ride from Bardstown to Harrodsburg, Ky., Hamilton changed his mind. "After I tested out long distance on the bike, I found that I enjoyed it," he said. "I could have taken physics this summer, but I'm going to remember this forever."

Hamilton joined Jury and Fijis Across America shortly after the ride.

Fijis Across America stems from Jury's WKU fraternity, Phi Gamma Delta, also known as Fiji, who has helped the team get off the ground with support and a Web site. Jury's ultimate goal is to raise $75,000 to benefit Alzheimer’s research and to raise awareness across the country about the disease. The Fijis have raised approximately $11,200 for the Alzheimer's Association so far.

This month, the team is focusing on a $25,000 Pepsi Refresh Everything grant. If they win, the Kentucky students will have enough money to pay travel expenses. "We can focus on advertising the Alzheimer's cause and not on getting breakfast," said Hamilton. "My mom will sleep a lot better at night, too."

The journey begins in Oceanside, Calif. on May 25. The team will average 65 miles a day, riding for 54 (added some rest days) days to end in Yorktown, Va. on July 19. With fundraising events and a daily blog, this isn’t the last that Kentuckians will hear from the Fijis. "I think every day about pulling my back tire off of the beach in California and starting the journey of a lifetime," Hamilton said. "This is going to be a success."

For more information, contact Hamilton at cameron.hamilton@uky.edu or 270-307-4481, or check out www.fijisacrossamerica.com.