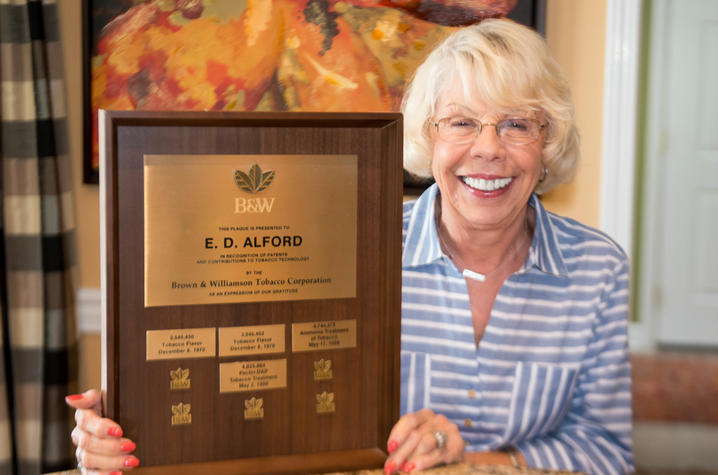 LEXINGTON, Ky. (Aug. 30, 2017) — A recent gift of more than $3.1 million will bolster scholarships for budding food scientists at the University of Kentucky College of Agriculture, Food and Environment.

“It was his dream to set up a scholarship fund in food science,” she said. “He talked about this for years, and he left me in a situation where I could do it. I hope these students end up making a difference in the world.”

Demp Alford spent many years working for Brown and Williamson Tobacco, where he contributed to several patents. After taking early retirement at age 54, he worked for a few smaller companies before deciding to set up a laboratory in his basement, where he worked full time in food science consulting until his death in 2015.

Donna Alford said she gave with the hope the money would help the college recruit and retain the brightest food science students.

“This is a transformative gift that will greatly benefit our food science program,” said Richard Coffey, chair of the UK Department of Animal and Food Sciences. “Having the ability to offer full tuition scholarships makes our program much more attractive to prospective students and allows us to recruit some of the top students from across the United States.”

The first three scholarship recipients were chosen in July. They are Nakoma Ehrhart, of Louisville, and McKenzie Miller and Brittany Adkins, both of Lexington.

Ehrhart was president of the UK Food Science Club last year. She spent a year volunteering in a hospital nutrition department during high school and realized she was more interested in the food than the medical application of it.

“I took my first chemistry class and never looked back,” she said. “I loved every second of it. I started searching for a field that combined food and chemistry, and that’s how I discovered food science.”

She wants to develop new food products for consumers, a field where she can be creative in her chemistry skills, and she believes the scholarship will help her realize her dreams.

“I have no doubt I can accomplish them now,” Ehrhart said. “The scholarship will allow me to save enough funds to begin my journey toward my next goal of continuing in graduate school. I was not sure I’d be able to afford the next level of education no matter how intensely I wanted to achieve it, but this scholarship erased any doubt I had about that.”

College Dean Nancy Cox said Ehrhart is just the first of many students to realize their dreams as a result of the Alford’s gift.

“This generous gift will support many future food scientists and elevate UK’s already prominent place in the field,” she said. “We know how important food science is to the health, welfare and economic status of individuals and nations. We are looking forward to seeing the results for many years to come here in Kentucky and around the world.”