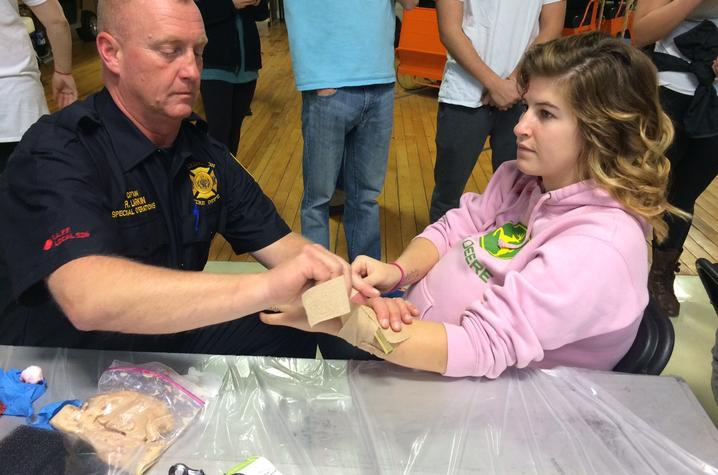 Capt. Rob Larkin of the Lexington Fire Department participated in the simulation and led a debrief with Clayton Oliver of the Lexington-Fayette Urban County Government Division of Emergency Management.

LEXINGTON, Ky. (Dec. 16, 2016) — The Buell Armory transformed into a scene straight out of a "Grey's Anatomy" episode on Monday afternoon as University of Kentucky College of Communication and Information (CI) Associate Professor Shari Veil's students prepared to respond to a simulated emergency situation.

Developed in 2013 by Veil herself, "COM 316: Emergency and Disaster Communication" aims for students to develop an “applied understanding of communication and life skills for high-stress situations.”

“In class we focus on CERT (Community Emergency Response Team) training and we have lots of guest speakers come in from different emergency response places to teach us how to handle different situations,” said Jennifer Branscum, a senior in Veil’s class studying human communications.

The entire semester of learning culminates in a final assignment where Veil creates a life-like emergency scenario, in which her students must apply their newly acquired knowledge. The catch is that upon entering the disaster scene, students have no idea what they might encounter. By experiencing what it's like be first responders, the idea is that students will be better equipped to communicate emergency situations.

This year, the situation involved a devastating tornado blowing through the Buell Armory during a study abroad fair leaving students and faculty members with some very serious and even fatal wounds that needed attending.

Fifteen of the 40 students in class volunteered to be victims in the simulation and arrived to class early for moulage: the application of fake wounds and injuries for the purpose of training emergency response teams.

After the mock student victims (and a few generous CI faculty and staff members who volunteered for the activity) assumed their injured positions, it was go time. The students in the class acting as first responders rushed into the armory, armed only with the knowledge that a tornado hit during a study abroad fair.

With the incident commander and safety officer taking the lead, first responders were divided into different emergency response teams for triage, transport and treatment and wore different color vests to indicate their affiliation.

Throughout the semester, students engaged in activities related to emergency and disaster planning such as developing emergency evacuation plans, preparing emergency kits and learning medical triage and first aid, and now they were able to put those learning exercises to the test.

“If you can hear me, walk to me,” mock first responders said as they tried to weed out the less severe injuries from the more serious ones. They paced around the disaster scene with four different colored ribbons tagging victims with minor, walkable injuries (green); injuries that required observation, but were stable (yellow); ones that needed immediate attention (red); and victims who had passed (black).

Using real wraps, bandages and gauze, treatment team members helped victims with broken limbs, cut and bruised faces and a plethora of unseen injuries as well as dealing with other complications like hearing loss, patients in shock, a missing child, a pregnant woman and victims who didn’t speak English.

Sam Shannon, a senior communication major in the class was one of the volunteer victims who suffered from both a serious arm and abdomen injury. “I really dedicated myself to the role of a victim, which made the situation feel really realistic,” Shannon said. “The simulation was a great way for everyone in the class (victims and first responders) to participate and understand course concepts.”

Along with Veil, Capt. Rob Larkin of the Lexington Fire Department and Clayton Oliver, a CSEPP (Chemical Stockpile Emergency Preparedness Program) planner for the Lexington-Fayette Urban County Government Division of Emergency Management, observed the simulation, took notes on what they saw and led a debrief at the conclusion of the activity.

Both positives and negatives of the activity were discussed during the debrief, and one theme ran true for all the parties involved: talking about the material in class is one thing, but applying that material to an actual situation is an entirely different experience.

“You can’t really be prepared for what they teach you until you actually get to do it,” said Elizabeth Farmer, another student in Veil’s class.

Veil’s knowledge in this subject area comes from extensive research on crisis communication and emergency preparedness that has been supported by over $1.4 million in grants and contracts and resulted in over 80 scholarly publications.

Veil also serves as the associate dean for undergraduate affairs in the College of Communication and Information, a Lexington Community Emergency Response Team member and on the Lexington-Fayette County Emergency Planning Committee.