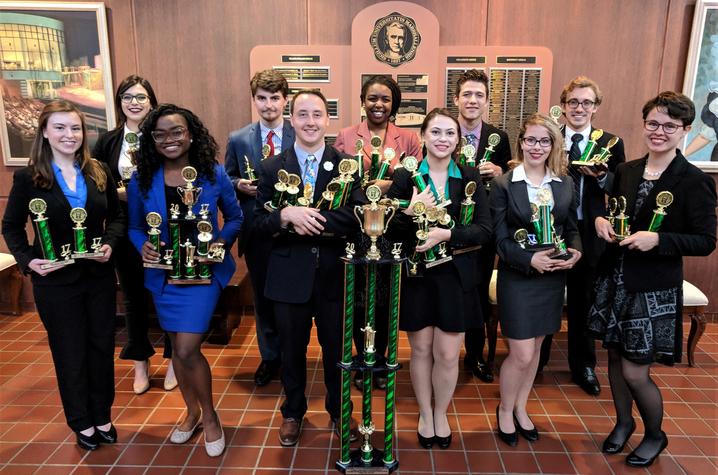 LEXINGTON, KY. (Nov. 21, 2017) — For the first time in the team’s history, the University of Kentucky Speech and Debate Team has won the prestigious Chief Justice Invitational tournament held by Marshall University. The tournament regularly hosts some of the top speech and debate teams in the nation, including current national champions Western Kentucky University. This year, 13 schools traveled to Huntington, West Virginia, for the competition.

Over the course of two days, UK team members took part in 13 different public speaking events. Junior Matt Karijolic was awarded the title of tournament champion for accumulating more points across these events than any other single competitor. Additionally, students from UK placed first in rhetorical criticism, prose interpretation and improvisational duo. These performances led the way in the team placing first in the public speaking event sweepstakes and qualified an additional six events for the national tournament in April.

The team also participated in parliamentary and public debate. In parliamentary debate, UK closed out the semifinal round of the competition, meaning all four debate teams were from UK. Students from UK also were awarded with six of the seven debate speaking awards. In public debate, UK closed on the final round as both competitors were also from the team and took the top speaking award in the category. Together, these victories propelled the team to a first-place finish in the debate sweepstakes competition.

View a complete list of awards won by UK at the tournament here.

The UK Speech and Debate Team is committed to training the next generation of civic leaders who are passionate about effecting change in their communities. The team’s next competition will be the WYRD Invitational held Dec. 1-2, at Transylvania University in Lexington. UK Speech and Debate is a student organization in the School of Information Science in the College of Communication and Information. To find out more, please visit the team’s website www.ukforensics.com.