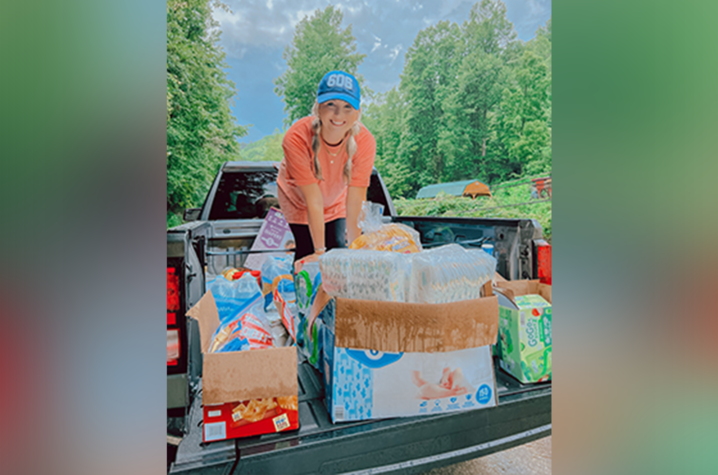 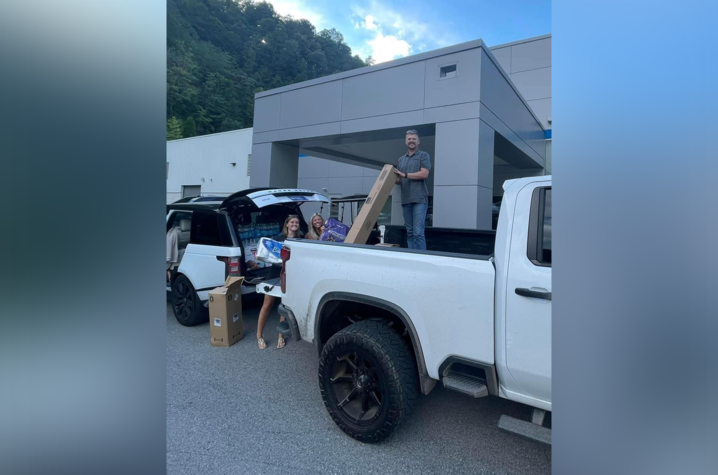 LEXINGTON, Ky. (Sept. 29. 2022) — July 27, 2022 was an average night. Sara Baker, a 2018 University of Kentucky College of Communication and Information journalism alumna and southern life and style influencer, went to bed in her home just outside of Lexington.

At 2:30 a.m. the next morning, her mother sent frantic, broken text messages, praying for the flood waters to stop before entering their family home in Whitesburg, Kentucky. The area's cellular service was down shortly after. Baker and her family, like many Eastern Kentucky natives, are familiar with occasional flash flooding; but this time, it was different.

"I lived in that house my whole life until I went to college," Baker said. "It's flooded (in Whitesburg) before, but it's never come close to getting to our house."

Whitesburg, located in Letcher County, was one of the many cities devastated by the floods of July 28.

When Baker woke at 6 a.m., the next few hours were riddled with hysteric phone calls, radar checks, Facebook scrolls and prayers for the safety of her parents and grandparents.

"I felt sick all day. I couldn't eat. I didn't know what to do. I was helpless," she said.

Thirteen hours and what felt like 1,000 unanswered phone calls passed before she heard from her family.

The call finally came at 4 p.m. On the other side of the line was her family, who drove out of the area after the water receded. She learned that her grandparents escaped their flooded home with the help of their neighbors’ boat.

"Sara, I'm blessed," said her grandfather whom, just a few hours earlier, was sitting on the kitchen sink, watching the water pour into his home while comforting his wife through her fear of drowning.

Baker considers herself one of the lucky ones, and she knew she needed to step up for her community. She used her greatest tool — her social media platform — and shared her community's story. From Las Vegas to Florida, the support rolled in, allowing Baker to purchase and deliver water, food and cleaning supplies to the hollers of Eastern Kentucky. In total, she raised over $5,000 for supplies and support.

"I could not have done any of it without them," she said. "I am so grateful for my little platform of people because they truly showed up for Eastern Kentucky."

In her multiple trips to the region, what stood out most to Baker wasn't the damage, but the unity of Letcher County. Among the destruction — thick mud and debris — were community members and strangers tirelessly working side by side to help others.

"It's almost like no one has really had the time to grieve, because as soon as it happened, everyone started coming together," she said. "If (someone) gets their part cleaned up, they will go and help their neighbors."

Kassidy Stumbo, another 2021 journalism alumna and current UK J. David Rosenberg College of Law student from Floyd County, falls into that category. She first saw the damage during her morning social media rounds, where members of her community were checking in on each other.

Like Baker, Stumbo utilized her social media platforms to organize relief efforts. In total, she and friends and family took eight loads of food, hygiene products and clothes to various areas in the region.

“The pictures are horrible, but the pictures do not do it justice," Stumbo said. “However bad you think it is, it’s probably 10 times worse.”

Although those like Stumbo and Baker are participating in important relief work, the work is far from over.

"Now that we’re over a month out, I worry that there's going to be this forgetting that (the flood) happened," Stumbo said. "I want to remind people that it will take years to rebuild the area. We need the help of the entire state."

To view the University of Kentucky’s response to the historic flooding in Eastern Kentucky, please visit https://uknow.uky.edu/campus-news/university-kentucky-providing-support-eastern-kentucky-after-severe-flooding.