LEXINGTON, Ky. (Feb. 11, 2019) — Student Activities Board, Gatton Student Center, and the College of Arts and Sciences invite students, faculty, staff and community members to the "Black in Blue" film premiere. The free, public event will be held at 6:30 p.m. Thursday, Feb. 21, in the Worsham Theatre in the Gatton Student Center to look back at how the University of Kentucky’s football team broke the color line in the Southeastern Conference.

"Black in Blue" explores the groundbreaking history that took place on UK’s football field in 1967 when Nate Northington and Greg Page became the first African-American scholarship athletes to play in the Southeastern Conference. Their courage to play paved the way for two more African-American players, Wilbur Hackett and Houston Hogg, to join UK’s football team and started a revolution of change within the South.

Producers Paul Wagner and Paul Karem created the film to tell a positive story of triumph in a time of a deep divide and regression in society. The film uncovers many incredible untold stories. Everything from the governor of Kentucky taking the lead in recruiting Nate Northington to a friend and teammate of Jackie Robinson discovering Greg Page and realizing that he could be the "Jackie Robinson of the SEC," and so much more.

“Black in Blue" celebrates the role of the university and four UK athletes in one of the most important breakthroughs in sports and civil rights history, the integration of the Southeastern Conference,” said film producer and UK alumnus Paul Wagner.

“It is on the shoulders of these giants that today's student athletes stand,” said UK Vice President for Institutional Diversity Sonja Feist-Price. “This phenomenal film is a must-see masterpiece that captures your senses and evokes emotions.”

To learn more about the film or watch the trailer, please visit BlackinBlue.org. 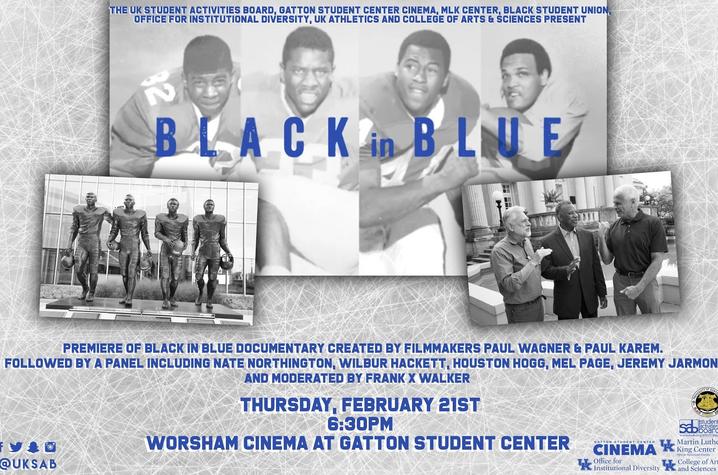