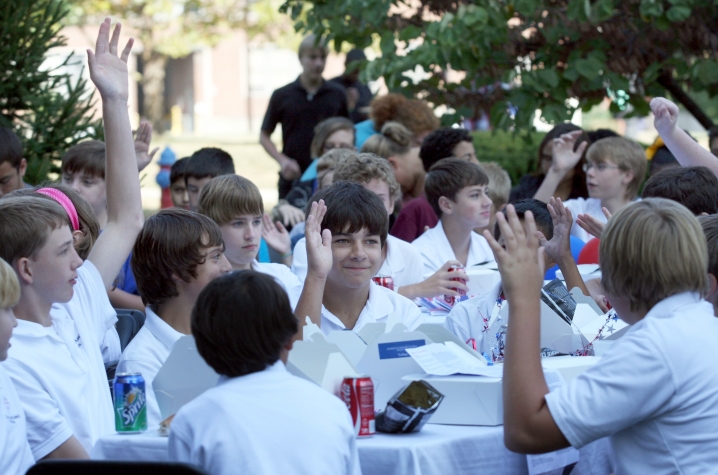 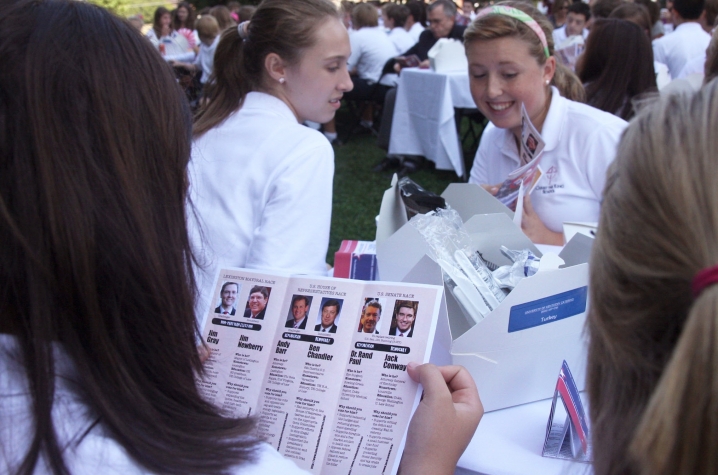 LEXINGTON, Ky. (Sept. 12, 2011) — The University of Kentucky will provide apple pie on Tuesday, Sept. 13, and food for thought at a Citizen Kentucky public forum Friday, Sept. 16, as part of the university’s seventh-annual commemoration of Constitution Day.

Last year, the Citizen Kentucky Project of the Scripps Howard First Amendment Center and the Chellgren Center for Undergraduate Excellence joined with the Gaines Center for the Humanities to have scholars, civic leaders and students read excerpts of banned books.

This year, from 11 a.m. to 12:30 p.m. Friday, Sept. 16, on the north lawn of the Main Building, middle school, high school and college students will reconvene to update citizens on their draft bill, the Henry Clay-Sandra Day O’Connor Civic Education Act for Kentucky, which received bipartisan support and which will be formally introduced in the state legislature in October.

“It was amazing,” said Lindsey Austin, who last year as a Discovery Seminar freshman was honored as a Kentucky Colonel for her work on the bill. This year she is Ryan’s peer instructor for the new group of Fall Discovery Seminar freshmen, who are organizing the Friday public forum and will be helping the schoolchildren refine their bill and get it ready to be formally introduced.

Austin and Gary Hermann, another Discovery Seminar freshman recognized as a Kentucky Colonel, worked with a Catholic middle school, Christ the King School, and a public high school, Tates Creek High School's International Baccalaureate students, to draft the bill and lobby for it in Frankfort.

Republican State Sen. Alice Forgy Kerr and Democratic State Sen. Kathy Stein, both of Lexington, agreed to co-sponsor the bill in the Senate, and State Rep. Adam Koenig (R-Erlanger) and State Rep. Susan Westrom (D-Lexington) offered their help in the House in March when the students visited the Capitol to begin their lobbying.

Those state lawmakers are expected to join candidates for governor and Secretary of State at the Citizen Kentucky forum on Friday along with Al Cross, longtime political writer and director of UK’s Institute on Rural Journalism and Community Issues, and several other guest speakers.

Joining the civic education team to help the children are Student Government President Micah Fielden and Vice President Nikki Hurt, who this summer launched the Wildcat Interest Group, or WIG. The goals are to form relationships with lawmakers, to mobilize students across the state to promote a “pro-higher-education outlook” in Frankfort and to provide students with government internship opportunities, including ones in Washington, D.C., Fielden said. (For more information, see: http://kykernel.com/2011/07/27/student-leaders-push-for-lobbying-in-frankfort/)

Student Government joins a long list of co-sponsors for Constitution Days at UK, including the Offices of the President and the Provost, the Scripps Howard First Amendment Center, the College of Education, the College of Communication and Information Studies, the Discovery Seminar Program of the Chellgren Center, and the Student Center Director’s Office.

On Tuesday, Sept. 13, from 11 a.m. to 1 p.m., UK will provide free apple pie, copies of the U.S. Constitution and an opportunity for voter registration at the Patterson Office Tower courtyard and the Rose Street/Funkhouser Drive walkway to the William T. Young Library. In case of inclement weather, the event will take place at the Student Center Patio.

Congress passed legislation in 2004 requiring educational institutions that receive federal funding to hold an educational program on the U.S. Constitution each year on Sept. 17 to commemorate the Sept. 17, 1787, signing of the Constitution. (If Sept. 17 falls on a Saturday, as it does this year, or on a Sunday or a holiday, Constitution Day shall be held during either the preceding or the following week, according to the law.)

"Sounds crazy in the context of the First Amendment, which begins ‘Congress shall make no law,’" said Ryan, who has been involved in each of UK’s seven annual events. "But we have embraced the challenge and had a blast each year.”