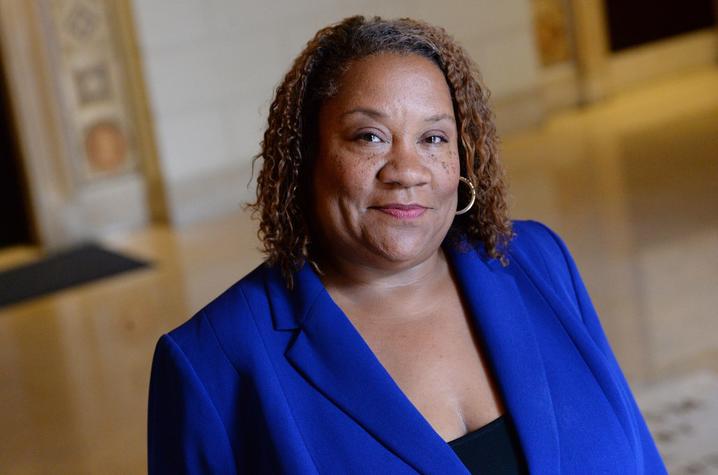 LEXINGTON, Ky. (Sept. 25, 2017) — The University of Kentucky School of Journalism and Media, within the College of Communication and Information, will welcome home one of its outstanding alumni when Dana Canedy, recently named the administrator of the Pulitzer Prizes, returns to campus Wednesday, Sept. 27.

“Dana Canedy: The road from UK to the Pulitzer Prizes” will feature a conversation with the woman who grew up near Fort Knox, Kentucky. Beth Barnes, former director of the school and a professor in the Department of Integrated Strategic Communication, will interview Canedy about the road she has walked, her successes and the obstacles she has overcome. Barnes will also ask questions submitted by members of the audience. The program will begin at 7 p.m., in the Kincaid Auditorium of the Gatton College of Business and Economics Building.

Canedy graduated from UK with a bachelor’s degree in journalism in 1988. She worked at the Palm Beach Post in Florida for a year reporting on law enforcement and crime. The Cleveland Plain Dealer hired her to cover law enforcement, suburban government and local business. She worked as an editor for a year directing metropolitan coverage before leaving in 1996 to work for The New York Times.

During her 20 years at the nation’s top newspaper, Canedy worked three years as a business reporter and three more as the Florida bureau chief, overseeing news coverage from the state, including the 2001 election. She also was a lead writer and editor on the series, “How Race is Lived in America,” which won the 2001 Pulitzer Prize for national reporting. The series looked at race relations in this country.

Canedy also is the author of “A Journal for Jordan,” a best-seller on The New York Times Best Sellers List. The book told the story of her partner and father of her son, who wrote a journal for their child before returning to Iraq. He was killed in 2006, six months after Jordan was born.

In July, Canedy was named the administrator of the Pulitzer Prizes. She is the youngest person, the first woman and the first person of color to serve as administrator in its 101-year history. She is responsible for overseeing all aspects of the prestigious awards program in journalism, letters and the arts. She serves on its board of directors and is the spokesperson for the Pulitzers.

Canedy also will be one of eight alumni of the School of Journalism and Media honored Thursday at a lunch for students, “Lunch with Our Stars,” and at the First Amendment Celebration at 6 p.m. Thursday, in the UK Athletics Auditorium of the William T. Young Library.

The program Wednesday is being sponsored by the UK student chapters of the National Association of Black Journalists and the Society of Professional Journalists; the Bluegrass Chapter of SPJ; the School of Journalism and Media; the Diversity Committee of the College of Communication and Information; and UK’s Office for Institutional Diversity.

The presentation is open to the public. A brief reception will follow.