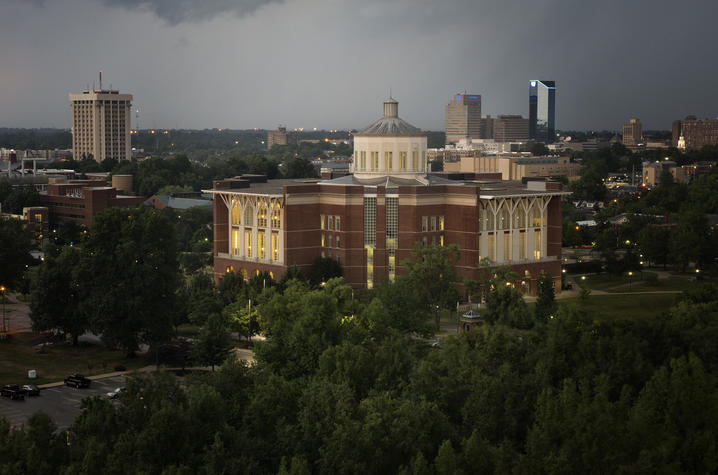 LEXINGTON, Ky. (Oct. 9, 2017) — A new species of city is making itself known across the country through its steady success during uncertain economic times. These “university cities,” as they are now referred to, have outgrown their college-town status and created dynamic economies around major research universities in their urban core.

To better understand this phenomenon, the University of Kentucky Gaines Center for the Humanities and the Lexington-Fayette Urban County Government (LFUCG) will bring national scholars as well as community and education leaders from these communities to Lexington for the first conference on this model this Friday, Oct. 13, at the Gatton College of Business and Economics building.

“A handful of university cities share a number of distinctive traits,” said Phil Harling, the John R. Gaines Chair in the Humanities and director of the Gaines Center. “Better understanding what these cities have in common has the potential to make them even more desirable places to live and work than they are at present.”

The term university city was coined by Lexington's own Scott Shapiro, LFUCG chief of innovation, as part of his research on cities with a similar makeup to Lexington. This research was later verified in an analysis by UK Department of Statistics Professor and Chair Arnold Stromberg.

As a university city, Lexington is part of a small group of six communities across the U.S. with:

Research shows the advantage these select communities enjoy is due specifically to the relationship between the university and city.

"With universities, there's research money that flows in, they hire a lot of people — a lot of well-educated people — and they tend to ride out recessions pretty well, so they're an anchor of stability in any community," Shapiro said. "That’s true of any research university. But when you have a college town, you can only leverage that so much. When you grow into a university city, with a diversified economy, there's all kinds of network effects that happen."

Research from labor economist Enrico Moretti backs up Shapiro’s claim. Moretti’s findings show that having more highly degreed people in a university city not only raises median income for those individuals, it also raises productivity and income for those without degrees in the same city.

Other research finds the prevalence of entrepreneurship and patents available in university cities raises the level of patent use by companies that have no direct connection to the university.

In addition, university cities often feature outsized arts and culture sectors that in turn morph the city into what Shapiro calls a "culturally rich idea-filled community."

The University Cities Conference is presented in conjunction with the Gaines Center’s Lafayette Seminar in Public Issues. Each year, the Lafayette Seminar provides an opportunity for Lexington community members, elected officials, and faculty and students to discuss issues facing the community. Previous topics have explored the local economy, town and gown relations, community gardening, public art and the creation of successful downtown spaces.

Founded in 1984 by a generous gift from John and Joan Gaines, the Gaines Center for the Humanities functions as a laboratory for imaginative and innovative education on UK's campus. The Gaines Center is designed to enrich the study of the humanities as an intellectual activity and as a means to self-betterment. The center offers courses and sponsors activities that appeal to faculty and students in all disciplinary fields.