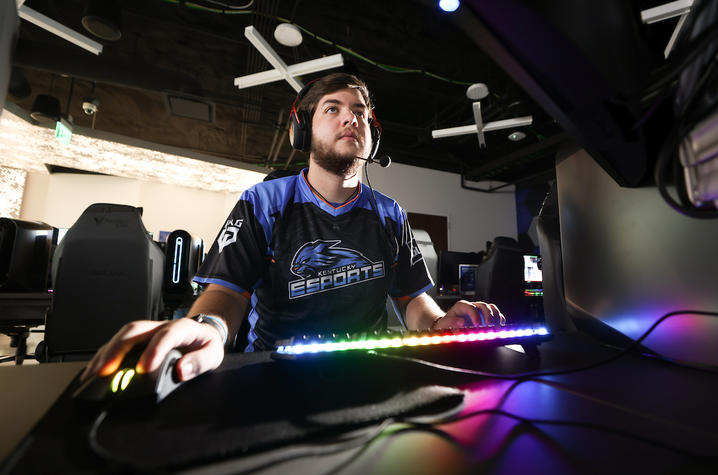 LEXINGTON, Ky. (Nov. 4, 2021) — The 2021 Overwatch U.S.-Korea Virtual College Esports Tournament will be held in Busan, South Korea, a mecca of esports. Eight students from the University of Kentucky will be participating.

The tournament, officially endorsed by Blizzard Entertainment, will be held on Nov. 9 and 11, with the Busan IT Industry Promotion Agency as organizer, and City of Busan, U.S. Embassy Seoul, U.S. Consulate in Busan, Education USA and ROCCAT as official sponsors.

The 2021 Overwatch U.S.-Korea Virtual College Esports Tournament was planned and organized to promote friendship and cooperation between Korean and American universities through esports events.

A total of 16 universities, eight from each country respectively, are participating in the games.

The UK players include:

A total of 16 teams will begin their first and second round on Nov. 9 online. The semifinals and final will be held at the Busan Esports Arena on Nov. 11. Considering server pings of Korea and the United States, the league will take place on “Hawaii (gaming) servers.”

The final winner will be awarded 2,000,000 KRW (approx. $1,800) in prize money as well as a scrim chance with an Overwatch professional team as an additional prize. Moreover, ROCCAT will provide the top four teams with gaming gear as an official sponsor. Also, if a team based in the region other than Busan advances to semifinal, they will be provided the accommodation and transportation support for their participation in the games.

“These matches between Korean and American universities are quite meaningful because they are organized and conducted through collective efforts of the City of Busan and the U.S. Embassy Seoul,” said an official of the Busan IT Industry Promotion Agency. “It is regrettable that the contenders are not able to see each other and have matches in-person due to the pandemic this year but we will continue to explore various esports programs to promote friendship between the two countries, so that this should not end up as a one-time event.”

Esports at UK brings together academics, community and professional development through a growing global sport and business. UK offers a variety of ways for gamers of all levels to get involved through events, Esports Club, the UKFCU Esports Lounge and more. This month, the Stuckert Career Center, housed in the Office for Student Success, will host Career Gamification: Prepping for Careers in Esports.

Wondering how to prepare for a career in esports? Want to network with UK's leading esports partner, Gen.G? If so, this event is for you. The event will have workshops on resumes, cover letters, elevator pitches and the power of networking. Students can register here.

To learn more about esports at UK, visit esports.uky.edu.